To move, astonish and delight mankind: Shakespeare at Stowe 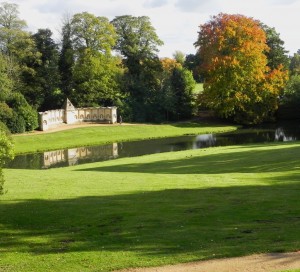 With the extravagance of the Chelsea Flower Show behind us, and gardens and open spaces looking at their best, summer has finally started.

Shakespeare has always been associated with nature, writing about flowers, plants and the English countryside.  So it’s surprising that few portraits of him locate him in gardens, or that more statues have not been designed to be seen in natural surroundings. Statues and busts stand in churches, or on the outsides of buildings, and engravings are decorated with just the occasional laurel wreath.

In a previous post I talked about how, in the early years of the Restoration, Shakespeare’s plays were seen as resources to be plundered for the benefit of the new theatres. Shakespeare himself was rarely considered: the folio editions contained an image of the man, but enthusiasm for Shakespeare himself, and interest in his portrait, began to grow from around 1700 onwards, when respect for his work also began to grow.

Alexander Pope was one of England’s most important poets, and edited Shakespeare’s plays in 1720. David Piper, in his book O Sweet Mr Shakespeare, I’ll have his picture, quotes Pope’s 1711 claim to “keep the pictures of Dryden, Milton, Shakespear, etc, in my chamber, round about me, that the constant remembrance of”em may keep me always humble”. 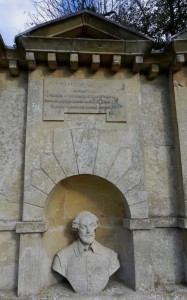 Yet one of the very first sculptures of Shakespeare was designed for a garden setting.

Portrait sculpture, except for church memorials, had been mostly of royal subjects, but in England the fashion for everything classical encouraged a new interest in the celebration of heroes in sculpture. Among enthusiasts for the classics was Richard Temple, First Viscount Cobham, who began to pour massive amounts of money into creating the magnificent classical gardens at his country seat in Stowe in Buckinghamshire around 1717. He was a great friend of Alexander Pope, who had already written a poem entitled The Temple of Fame, imagining poets’ busts mounted on columns, and in 1728 architect James Gibbs created a building The Fane of Pastoral Poetry which included a series of stone busts. It was recorded by Gilbert West in a 1731 poem:
Around thy building, Gibbs, a sacred Band
Of Princes, Patriots, Bards and Sages stand. 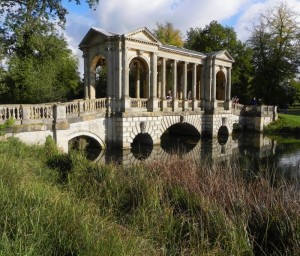 This building was later moved and renamed, and in 1735 the busts were removed to a newer, grander structure, the Temple of British Worthies, designed by William Kent. The early busts, including it is thought Shakespeare, were designed by John Michael Rysbrack, the later ones by Peter Scheemakers. The Temple of British Worthies is still part of the gardens at Stowe, though overshadowed by the monumental classical-style buildings and bridges that adorn them.

The story of the worthies, though, is interesting, not least because of the selection of people thought appropriate for this place. It was the first time that the figure of Shakespeare had been seen in a national context alongside such high status figures as Alfred the Great, Elizabeth 1 and Sir Francis Bacon. Alexander Pope himself of course features in this distinguished group. 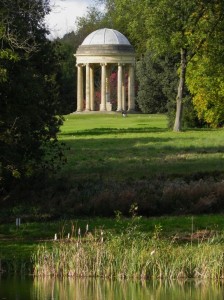 But Richard Temple, First Viscount Cobham, had a political motive in choosing the people populating his Temple of British   Worthies. He was opposed to the government of the day and specifically chose subjects who he felt were being betrayed by the current government, including contemporaries such as John Barnard who shared Temple’s political views. Shakespeare and Milton represented “Poets who scorn’d the Muses to profane,/Nor courted vice, nor wrote for sordid gain”.  The implication in Samuel Boyse’s poem The Triumph of Nature is that Shakespeare was a national hero whose writing was untouched by the corruption of money: a not entirely factual account of Shakespeare’s writing career.

The list of worthies is reminiscent of the pageant of the nine worthies enacted during Shakespeare’s play Love’s Labour’s Lost, where the worthies, Pompey, Hector, Alexander and others come from the classical world.

Each of the sixteen busts includes a patriotic inscription by Alexander Pope, and although we might not agree that Shakespeare wrote without being influenced by money, we can’t argue about Pope’s assessment:

William Shakespeare
Whose excellent Genius open’d to him the whole Heart of Man,
all the Mines of Fancy, all the Stores of Nature;
and gave him Power, beyond all other Writers,
to move, astonish, and delight Mankind.

Stowe’s stupendous gardens are open to the public, now in the care of the National Trust. 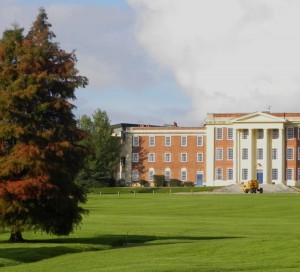 Stowe School occupies the magnificent house, and this too has its Shakespearian connection. During the nineteenth century the house was lived in by the Duke of Buckingham and Chandos, and what became known as the Chandos portrait of Shakespeare hung in the house until the painting was sold to the Earl of Ellesmere who in turn presented it to the National Portrait Gallery in the 1850s.

Stowe’s house and gardens, unlikely as it seems, hold a unique place in the history of Shakespeare and his growing reputation.

One Response to To move, astonish and delight mankind: Shakespeare at Stowe