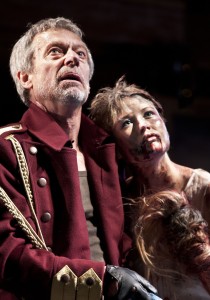 Last Thursday, 25 June, I attended an event at which the Royal Shakespeare Company invited bloggers to a performance of their current production of Titus Andronicus followed by a Question and Answer session with the director and members of the cast. I’m going to be writing more about this event later, but for now I’m posting a few sound clips from the Q&A which featured director Michael Fentiman and cast members Katy Stephens (Tamora), Stephen Boxer (Titus) and Rose Reynolds (Lavinia).

The discussion ranged around many areas of the production, the performance experience and the rehearsal period, as well as some wider thoughts about how the play relates to others written by Shakespeare.

The quality of the recordings is a bit hit and miss, but it’s still interesting to hear the voices of the actors and director talking about a production which has obviously been an absorbing project for all the participants.

Violence is a key theme of the play and of the production, and I begin with Rose talking about playing Lavinia, in particular after she has been horribly violated.

This second clip is of Stephen talking not about his own performance but about the character of Aaron, prejudice and human nature as described by Shakespeare.

Music is a notable feature of the production and here is Michael talking about the way in which music is used.

And finally here is Katy talking about performing Shakespeare’s women. A few years ago she played both Joan of Arc and Queen Margaret in the Henry VI plays for the RSC, and here she discusses the threads that link those characters, Tamora, and Shakespeare’s later creation, Lady Macbeth. 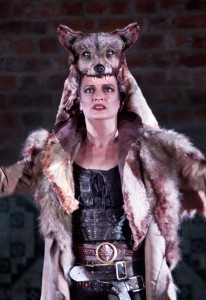 I’d like to thank all the participants for so generously giving their time, to the RSC for organising this event, and to the other bloggers who took part for their stimulating questions.