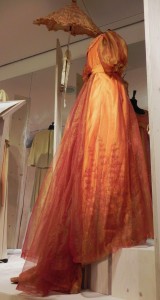 I’m revisiting the RSC’s Into the Wild exhibition again, where one of the costumes from the RSC’s 1973 Love’s Labour’s Lost is exhibited. It’s the formal version of Rosaline’s costume (Estelle Kohler) with a train and matching parasol. One of the production photographs shows her and the other ladies of the French court, including Susan Fleetwood as the Princess.

The lead designer for the production was Timothy O’Brien, along with Tazeena Firth. O’Brien joined the RSC in 1966 and his designs added to the success of many of the Company’s notable productions including John Barton’s Richard II and Troilus and Cressida and two productions of Love’s Labour’s Lost, the first in 1973 directed by David Jones, the second by Terry Hands. 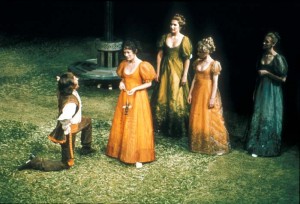 Berowne (!an Richardson) kneels before Rosaline (Estelle Kohler). Behind her is the Princess, played by Susan Fleetwood and her ladies

His contribution has been recognised by his appointment as Honorary Associate Artist of the Company. As well as working with the RSC, O’Brien and Firth designed many important productions including the enormously successful musical Evita.

His designs can be distinguished by his use of intense colour in the costumes and the use of flowing, sensual fabrics in both costume and set. O’Brien was born in India, which may have influenced his use of fabric. These subtly set the mood, rather than adding architectural elements, leaving the stage free for the actors to work on. 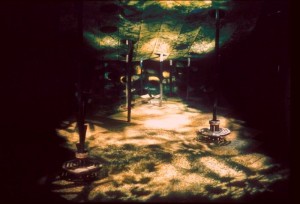 This can be seen in the 1973 Love’s Labour’s Lost where the major scenic element was a large printed silk canopy hung above the stage, and the ladies costumes were delicately printed with leaf motifs. The lighting added to the effect of a summery  outdoor glade in which the comedy played out. The photographs, particularly that showing the whole stage, demonstrates the sort of delicate effect which O’Brien and Firth were aiming at creating. You can also see the stage floor, suggestive of grassy turf, the wooden seats, and the simple lookout post used by Berowne when he is required by the text to hide in a tree to overhear his friends. The unadorned post ensured that Ian Richardson as Berowne was in full view of the audience. One of the poems read out during this scene perfectly describes the effect of O’Brien and Firth’s designs:
On a day – alack the day!-
Love, who’s month is ever May,
Spied a blossom passing fair
Playing in the wanton air.
Through the velvet leaves the wind,
All unseen can passage find;
That the lover, sick to death,
Wished himself the heaven’s breath.

Here is a short sound clip of Roger Howells, Head of Stage at the time, talking about the design for this production and the work  of dying the fabrics which was carried out by the late Dorothy Marshall.