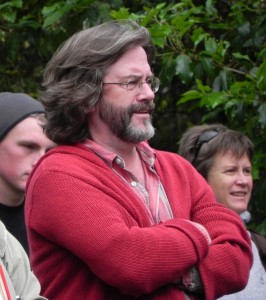 This weekend Stratford-upon-Avon has been the venue for a “daring new collaboration” between the RSC and Google’s Creative Lab to stage a real-time performance of A Midsummer Night’s Dream while simultaneously creating a digital presence in which anybody could join. The whole thing has been led by the RSC’s Artistic Director, Gregory Doran.

John Wyver of Illuminations and the RSC’s Media Associatie has posted two blogs, here and here describing the unfolding of the event and asking some important questions about it. He quotes Google’s Tom Uglow’s explanation of the project:

Conventional theatre starts with a stage. An audience comes, sits in front of it, they suspend reality, enter the narrative’s reality and are entertained. But why a stage? We don’t need a stage. Modern theatre makes the audience walk, or puts them in a car, or makes them the actor; our stage is online, it is fragmented, glimpsed, experienced and amplified through sharing – the narrative exists around us and immerses us…

Today’s big news events—riots, bombings, royal weddings—all become subject to this anarchic, multi-dimensional, multi-authored storytelling. About 18 months ago we started wondering if one could apply the same treatment to a fictional narrative, like a play? Could we bring a play out of the scenic world and into the real and online worlds? Could we generate the same storytelling impetus using Google+ as a platform? … A world of peripheral, unwritten parts occurring simultaneously within and around the main play. 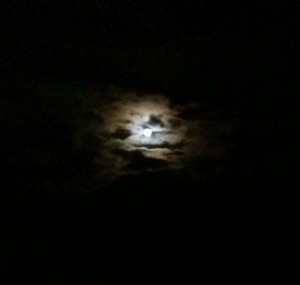 The performance began on Friday evening with the preliminary scenes of the play, and continued on Saturday night, or perhaps I mean Sunday morning at 2.30 am when they performed the main section of the play up to the waking of the lovers in the forest. Many of the tweets sent by people in the audience mentioned the magical effect of staging these scenes in real time in Stratford, hearing the dawn chorus of birds and seeing the sky lightening outside the Ashcroft Room. For me, just before “deep midnight” on Saturday, when Lysander and Hermia were due to be making their fictional escape from Athens, I spotted the full moon through the clouds. 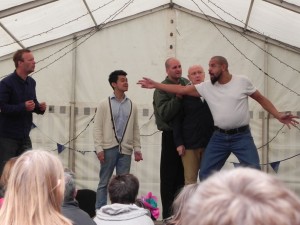 Joe Dixon as Bottom returns to his fellow-actors

On Sunday afternoon I joined the throng of people in Avonbank Gardens and the Dell for a performance of Act 4 Scene 2, in which Bottom returns to his fellows, and for a rehearsal of the final act in advance of the performance scheduled for 11.30.

Inevitably, rain stopped the rehearsal before the end, after an afternoon plagued by mostly grey skies and blustery wind that snatched the words from actors’ mouths. The play was continued at 11.30 pm and as they reached the end of the mechanicals’ play the bells of Holy Trinity Church just over the wall chimed the hours.
The iron tongue of midnight hath told twelve.
Lovers, to bed; ’tis almost fairy time. 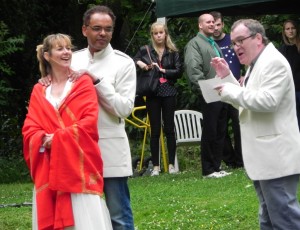 Rehearsal: Philostrate reading the titles of potential entertainments to Hippolyta and Theseus

This has all been great, and the magic of performing this play in real time in Shakespeare’s Stratford makes it an event very much worth repeating. The RSC has brought in some of its most polished performers including Peter de Jersey, Alexandra Gilbreath and Mark Hadfield. But it will be interesting to see how it is regarded as a digital event, or as a hybrid digital and real-time event. As John Wyver has pointed out in his second post, there doesn’t seem to have been the sense of a conversation going on in the online exchanges. I was pleased to receive photographs on Google+ of the play taking place during the night, but they didn’t draw me in. 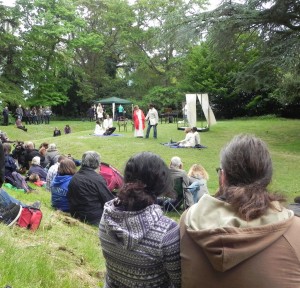 Watching the rehearsal in The Dell

I only felt part of the event when I actually went along to the afternoon staging. Several of the online responses commented on how much they wish they were in Stratford. And John Wyver quotes a tweet he received asking if the web presence has been just “digital candyfloss”.  Here’s a link to Pete Kirwan’s response to the online material.

Midsummer Night’s Dreaming has been a step towards finding methods of involving new audiences who would never set foot in a theatre but love their smartphones. Where, I wonder, will this take us next?