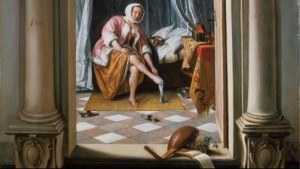 One of the most compelling exhibitions of the year for anyone with an interest in life in Shakespeare’s period is that currently at the Queen’s Gallery, Buckingham Palace where In Fine Style: the Art of Tudor and Stuart Fashion is running until 6 October.

The exhibition follows the changing fashions of the period, including cross-fertilisation across Europe, using paintings from the Royal Collection. Over 60 paintings are on display as well as original garments, jewellery and accessories. Clothing indicated social status and the members of the court and royal families were the leaders of fashion, wearing the most sumptuous of clothes. What you wore, and how you wore it, also sent out important messages. 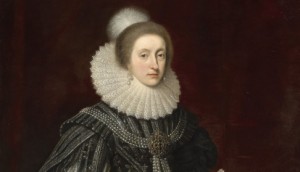 As well as the exhibition, events are also taking place: a study day on 22nd June is coming up, and a concert on 3 July.

It wasn’t of course just the nobility who were interested in clothes. In his 1577 Description of England William Harrison complains:
The phantastical folly of our nation (even from the courtier to the carter) is such that no form of apparel liketh us longer than the first garment is in the wearing… And as these fashions are diverse, so likewise it is a world to see the costliness and the curiosity, the excess and the vanity, the pomp and the bravery, and finally the fickleness and folly, that is in all degrees, insomuch that nothing is more constant in England than inconstancy of attire.

The 1574 Sumptuary laws were set up to prevent people of modest means wearing costumes that were too expensive for them, as well as making sure people of modest backgrounds did not dress above their social station. They were though often ignored, so strong was the desire for the latest fashions.

Clothing is often mentioned by Shakespeare, and in The Taming of the Shrew there is a scene in which a tailor brings in a gown for Katherina to try on. She’s promised the very best:
With silken coats and caps, and golden rings,
With ruffs and cuffs and farthingales and things.

Only for Petruchio to complain about the over-elaboration of the latest fashions:
What’s this? A sleeve? ‘Tis like a demi-cannon.
What, up and down, carv’d like an apple tart?
Here’s snip and nip and cut and slish and slash. 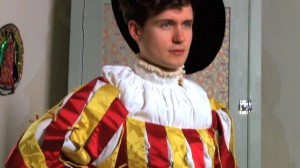 A reconstruction of one of Schwarz’s costumes

Some recent work has drawn attention to a piece of evidence that confirms that an interest in clothes was widespread. The Schwarz Book of Clothes dates back to the first half of the 1500s, and is a unique record of one man’s interest in fashion. What’s particularly interesting is the fact that Matthaeus Schwarz wasn’t a nobleman, but an accountant working for a banking organisation in Augsburg, Germany.

“He started to record his appearance in 1520, initially commissioning 36 images to retrospectively cover his appearance from childhood up until the age of 23. Over four decades he commissioned a total of 137 original watercolour images of his outfits, painted by three principal artists. “

Although Schwarz’s obsession was extreme, according to Jenny Tiramani it  “challenges the cliche that everyone who didn’t attend at a royal court went around dressed in grey rags and sack cloth.” Fashion was a subject in which the middle classes might also take an interest. The book is kept in a museum in Braunschweig, and is now receiving academic attention. The web page contains a huge amount of information and I would encourage you to follow it up. 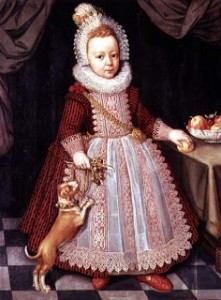 Portrait of a child with a rattle

I’ve also discovered this blog post which reviews a recent book on childrens’ clothing, Jane Malcolm-Davies, Ninya Mikhaila and Jane Huggett’s The Tudor Child: Clothing and Culture 1485 to 1625. Boys and girls were dressed alike for their first few years until boys were breeched, but the book suggests that the sex of the child could be indicated by more subtle means such as the shape of the collar.

This quote from the book explains one of the mysteries, what Elizabethan mothers made nappies from:

In 1573, Anne Bacon wrote to her stepmother asking for some old linen “to make cloutes for myself & the childe. Your Ladyship knoweth how good old linen is [for] such uses, yea better than new.” Used linen was suitable because it was softened and became more absorbent with repeated washing. The linen clout may have been doubled and lined with a layer of soft rags or with an absorbent material, such as sphagnum moss, and was usually fastened with pins.

We’re always fascinated by what’s being worn underneath, aren’t we? As Shakespeare put it “”Robes and furred gowns hide all”.

This entry was posted in Shakespeare's World and tagged children, costume, Quen's Gallery, Schwarz, The Taming of the Shrew. Bookmark the permalink.