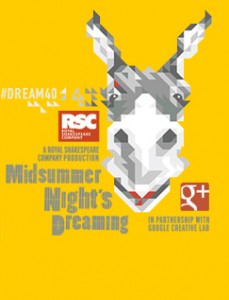 The rise of social networking has brought many opportunities for organisations to share their work: immediate, personal communication, instant updates, the ability to reach unconventional audiences. Organisations specialising in Shakespeare might be expected to be slow to join in, but in fact that’s not been the case and blogs, twitter feeds and facebook pages are everywhere. These can still, though, be marketing tools rather than ways of creatively exploring Shakespeare’s work. It’s over three years now since the Royal Shakespeare Company launched Such Tweet Sorrow, the “first step in creating new forms of creating narrative expression with new technologies and networks and reaching new audiences for Shakespeare”. For a period of five weeks in April and May 2010  a team of actors, the director Roxana Silbert, and media specialists ran with the idea of re-imagining Romeo and Juliet through the world of Twitter. Each character had their own Twitter stream so you could follow the path of one, or all of the characters and interact with them. In addition videos were posted on YouTube. Inevitably, the story was closely planned and coordinated, and it was perhaps this lack of spontaneity, over such a long period, that resulted in it falling a bit flat though the project’s ambition won it a Royal Television Society Award for Digital Innovation. The project even has its own Wikipedia entry, but how, I wonder, in the future, will it be remembered?

When working with the RSC’s archives it would have been  my intention to bring together materials created during the course of the project, as well as how it was received, especially as it was a pioneering attempt to use Twitter to tell the story of one of Shakespeare’s most popular plays. The RSC’s own page is pretty brief, but the Digital Content Development programme website contains more information.

After a gap, the RSC are now off again. Their new project is Midsummer Night’s Dreaming. It’s a collaboration between the RSC and Google, in which over “one unmissable midsummer weekend” there will be a real time interpretation of A Midsummer Night’s Dream. The fun will be happening on Google+, a platform I, like many others, haven’t joined yet, feeling that Twitter, Facebook, Flickr, Soundcloud, LinkedIn and this blog itself is actually rather more than enough to keep up with.

But this experiment is going to persuade me to join in. It’s a little difficult to imagine how the project is going to pan out, but this is Tom Uglow, the Director of Google’s Creative Lab’s description:

Google loves thinking big and we wanted to reimagine A Midsummer Night’s Dream for a digital age. Adding a little of our digital fairy dust to the magic of the RSC, the idea is to take the play from theatre into the real world, online and off, allowing people who can’t visit Stratford-upon-Avon to experience and itneract with the play via Google+.

Here’s part of the RSC’s description:

As the story unfolds in Stratford-upon-Avon, observers and people close to the action will be reporting their take on events for you online. Hear from Bottom’s nemesis The Evil Weaver, fairies Mustardseed and Moth and a wealth of other characters connected to Shakespeare’s main protagonists. Alongside this we want to hear your view of proceedings; use #Dream40 on Google+ to get involved, create and share. 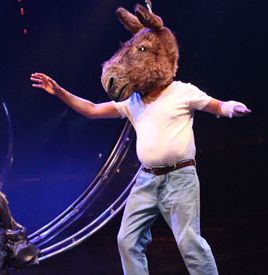 Perhaps the lessons of  Such Tweet Sorrow were that it is easier to maintain interest in this sort of project over a few days rather than over several weeks, and that people still like an actual event to concentrate on. In particular, if celebrating a Shakespeare play, I wonder to what extent they will feel it’s important to retain the form and language of  that play. Midsummer Night’s Dreaming is not just going to be a virtual experience: some of the scenes of the play are going to be staged in Stratford-upon-Avon. On Sunday 23 June, in the Dell, it will be possible to join in an afternoon of preparations followed by an enactment of the final scenes with Joe Dixon reprising his role as Bottom which he played for the RSC in 2009.

It seems they are even thinking about the afterlife of the project:
After the weekend is over and normality resumes, the whole play will be available to listen to online, alongside the best creations, thoughts and opinions from the online community.

I know it’s probably a bit sad of me to be almost more interested in how it will be preserved rather than the immediate experience, but without the memory of Such Tweet Sorrow fresh in the mind, the people creating this new project might be reinventing the wheel. As it is, they’ll have learned from previous experience and let’s hope this time the RSC and Google+ have a rip-roaring success on their hands.