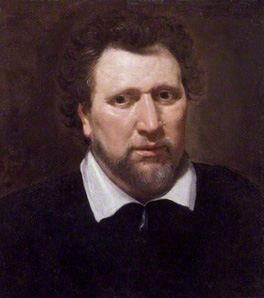 Many Shakespeare enthusiasts will know that Ben Jonson visited Scotland in 1618-19, after Shakespeare’s death. His aim was to visit some of his friends, and he spent Christmas with a poet, William Drummond, the Laird of Hawthornden, who recorded some of their conversations, in particular his comments about Shakespeare. It is from Drummond’s notes that we find out Jonson reckoned “Shakespeare wanted (ie lacked) art”, compared with the classical poet Horace and complained about his lack of regard for accuracy: “Shakespeare in a play brought in a number of men saying they had suffered shipwreck in Bohemia, where there is no sea by some hundred miles”. 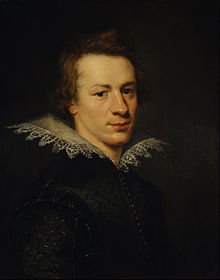 So much for Drummond’s notes, but until recently we have had no account of the journey itself. Jonson had written in up in 1619, but the manuscript was destroyed in a fire before it could be printed. All the details: his route, his stopping-off points, the people he met, all have been unknown. But in 2009 James Loxley of the University of Edinburgh discovered a document in the Chester Archives which turned out to be an account of the journey by Jonson’s companion. Nobody even knew Jonson had had a companion, and one of the mysteries is that we still don’t know who this person was. Loxley’s blog already has several entries about the discovery of the document that read like a detective novel, and taking place this summer a really interesting event called Ben Jonson’s Walk is to be held online.

From 8 July to 5 October daily tweets and twice-weekly blog posts will contain extracts from the document, linking up with places which were visited by Jonson and his unknown companion. Unusually, the entire journey was undertaken on foot. There’s already a map on the website on which you can check out the route and the places and people who were visited. Progress seems to have been leisurely. Jonson was himself quite a celebrity, much favoured by King James (who had visited Scotland himself the year before). No shrinking violet, Jonson had published his Works in 1616, making his plays, masques and poems even more widely known. Although he sometimes stayed in inns, he often found accommodation with the gentry who were, presumably, happy to have such an interesting guest.

The project website notes that another journey on foot from London to Edinburgh was undertaken at much the same time, by John Taylor the self-styled “King’s Majesty’s Water Poet”. It seems likely that Taylor, a great self-publicist, was jumping on the bandwagon. He set off on 14 July, less than a week after Jonson, also on foot, but with a companion and a horse to carry provisions.  Taylor, though, was “not carrying any money to or fro, neither begging, borrowing, or asking meat, drink, or lodging.” Quite how he managed to travel without money isn’t always clear, but at the end of his trip Taylor published his account as The Penniless Pilgrimage, or the Moneyless Perambulation of John Taylor which names and describes all the places and people he stayed with, so perhaps the promise of a favourable mention was seen as a good enough exchange for free accommodation. The full text is available here.

He wasn’t always lucky: denied a place to stay in Daventry, Taylor slept under the stars in a “field-bed” near Dunsmore, not far from Coventry.
My bed was curtain’d with good wholesome airs,
And being weary, I went up no stairs:
The sky my canopy, bright Phoebe shin’d
Sweet bawling Zephyrus breath’d gentle wind,
In heav’n’s star-chamber I did lodge that night,
Ten thousand stars, me to my bed did light;
There barricadoed with a bank lay we
Below the lofty branches of a tree,
There my bed-fellows and companions were,
My man, my horse, a bull, four cows, two steer.

Jonson’s route took him on the standard way to Scotland, as suggested in William Harrison’s Description of England, towards the east via Newcastle and Berwick-on-Tweed, but Taylor went further west, through Manchester where one John Pinner gave him eight different sorts of ale, and
I lodged at the Eagle and the Child,
Whereas my hostess, (a good ancient woman)
Did entertain me with respect, not common.
She caus’d my linen, shirts, and bands be washed,
And on my way she caus’d me be refreshed.

Taylor’s account isn’t great poetry but it is full of information about travelling the roads of England. We know from Shakespeare this could be dangerous: In Henry IV Part 1, pilgrims going to Canterbury fall prey to Falstaff and his gang. And in The Two Gentlemen of Verona Valentine encounters “the villains that all the travellers do fear so much”. When appointed their leader, though, Valentine makes them swear not to follow the “vile base practices” of carrying out “outrages on silly women or poor passengers”.  For both Jonson and Taylor, travelling humbly on foot may have made them less likely to be targetted by robbers. 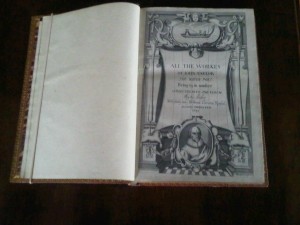 When in Scotland, Taylor records that “at Leith, …I found my long approved and assured good friend Master Benjamin Jonson, at one Master John Stuarts house; …at my taking leave of him, he gave me a piece of gold of two and twenty shillings to drink his health in England.” Taylor returned to England on horseback, and immediately set about publishing his account, which came out before the end of 1618. Jonson would be away for several months yet, and Taylor obviously knew people were critical of his publication: he writes in the foreword:
Many shallow-brained critics, do lay an aspersion on me, that I was set on by others, or that I did undergo this project, either in malice or mocking of Master Ben Jonson.

It’s hard to imagine that Jonson felt any professional jealousy of the much more lowly Taylor, but Jonson was notoriously irritable. The newly-discovered document helps to fill in a few of the gaps. Who knows how many more manuscripts of the period there may be in libraries and archives, still waiting to be identified?

3 Responses to Travelling to Scotland: Ben Jonson and John Taylor’s journeys on foot