Getting to grips with Shakespeare in Education 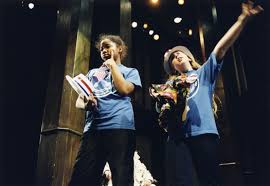 A photo from the Folger Shakespeare Library’s education pages

This week I attended a symposium titled Shakespeare in Education: Current Trends and New Directions, organised and led by students of The Shakespeare Institute, University of Birmingham.

Just between you and me, I was hoping to spend most of the day hearing about other people’s experiences as educators and learners, but it turned out to be a much more active day than that. Breaking the ice by offering each other Shakespearean compliments was a great way to start, and I’d like to thank Laura, Thea, James and the other attendees for making the participatory sessions such fun.

Nobody there needed any convincing on the question of why Shakespeare deserves to be taught in schools, so the day focused very much on the “How?” With a mixture of experienced teachers, students and interested observers the day gave all of us a fresh look at this developing subject. Many of the participants had taken part in recent international Shakespeare conferences, in particular last year’s Worlds Together Conference on Shakespeare in education in London sponsored by the Royal Shakespeare Company, and the recent Folger Shakespeare Library educational workshop on Setting Shakespeare Free and at the 2013 Shakespeare Association of America (SAA) Conference, Toronto. 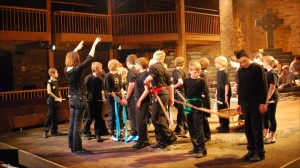 A photo of an RSC education session

The morning focused on active approaches to Shakespeare, looking at ways of using theatrical techniques rather than examining Shakespeare simply as a piece of text.  With no glitzy presentations the sessions had more of the flavour of a self-help group, and all the better for it as discussions centred on practical issues and solutions to real problems.

James Stredder led the morning’s main session with Shakespeare in the Cyberage: can collective theatre-making survive in today’s classroom? A few years ago James used his vast experience to write the invaluable teaching resource The North Face of Shakespeare. He involved us in several levels of activity from those that demanded no acting skills at all, to setting up tableaux based upon a line from a play and finally to the acting out of key moments from Act 1 of Hamlet using short pieces of dialogue. Making all the participants active is the ideal but later in the day some of the teachers commented on how difficult this can be to achieve given the reluctance of some teenagers to join in. Some of the suggestions offered to reduce students’  self-consciousness included using masks and acting scenes out using toys as models. 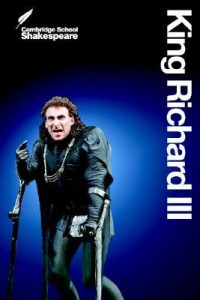 In his career James has worked with many of the best educators and suggested a number of resources to use for inspiration: I was pleased to be reminded of the work of the late Rex Gibson whose Cambridge School Shakespeare editions cover 27 of Shakespeare’s plays. These editions print the text on one side of the page while the facing page suggests ways of  teaching it. These down to earth editions, born of real experience, have provided teachers with practical help for a number of years.

After lunch the day got a lot more digital. Andrew Kennedy demonstrated his Moviestorm system which allows anybody to create their own movies by combining their own sound with avatars, and has a number of uses from creating training videos and commercial presentations to educational use in classrooms. The beauty of the system is that pupils can take the software and either by themselves or in groups put together a scene from Shakespeare. Although this might be seen as a “sitting down” rather than a “standing up” activity, in fact it gives those who don’t have acting skills or ambitions the chance to create their own performance. I found the way that the avatars can be manipulated to convey meaning and emotion by quite subtle facial expressions and body language absolutely fascinating. 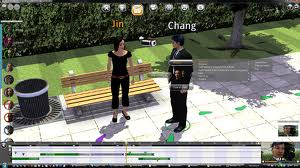 While it was agreed earlier in the day that it was more important to make young pupils comfortable with the language rather than trying to make them understand every word, at some point it’s necessary for students to really engage with the words. This system allows a combination of approaches. Andrew Kennedy has been working with actress/academic Abigail Rokison on making the software more appropriate for education, and as an example he demonstrated how an avatar could be created to “speak” some text recorded by Abigail, standing on a representation of the Globe’s stage. 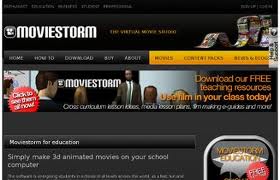 Moviestorm is a commercial product and one of the main constraints for teachers is lack of funding, but it has great potential and for any of you who would like to check it out and have a bit of time to play with it, there’s a two-week free trial available.

I’d like to thank Laura Nicklin and Thea Buckley for allowing me to take part, and all the other participants for making this a fun yet informative day. Thanks are also due to the Shakespeare Institute for hosting the event and the Library staff for their display of resource materials.

The British Shakespeare Association’s Educational Network exists to help support anyone interested in teaching Shakespeare and information about the day will be posted on its blog shortly. Anyone who wants to share their teaching experiences is welcome to post on the site.

Any teachers looking for ideas should also check out the Folger Shakespeare Library and the Royal Shakespeare Company as both websites contain masses of helpful online resources.

This entry was posted in Legacy and tagged education, learning, schools, Shakespeare Institute. Bookmark the permalink.

2 Responses to Getting to grips with Shakespeare in Education