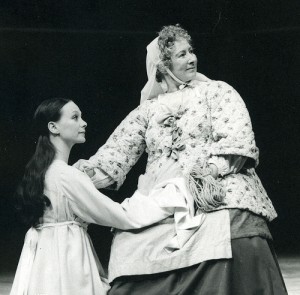 Francesca Annis as Juliet and Marie Kean as the Nurse, Romeo and Juliet, RSC 1976

Lammas Day, 1 August, was an important day in the calendar, but for Shakespeare-lovers Lammas Eve, 31 July, is the more significant because it was the day of Juliet’s birth.

Juliet is one of the few Shakespearean characters whose age and date of birth we know exactly, and Shakespeare tells us this before we know anything else about her. Act 1 Scene 3 of Romeo and Juliet is the first of a series of beautifully-written scenes in which the love of the two main characters develops. After the violence of the opening of the play with its brawl, the mood changes with Capulet’s exchange with Paris about his daughter and Benvolio and Romeo’s talk about gate-crashing the feast. Then we move backstage to this little gem of a scene in which a servant, the nurse, is put centre-stage. With its affectionate ramblings and bawdiness it is the warmest of speeches.

On Lammas-Eve at night shall she be fourteen;
That shall she, marry; I remember it well.
‘Tis since the earthquake now eleven years;
And she was wean’d,—I never shall forget it,—
Of all the days of the year, upon that day:
For I had then laid wormwood to my dug,
Sitting in the sun under the dove-house wall;
My lord and you were then at Mantua:—
Nay, I do bear a brain:—but, as I said,
When it did taste the wormwood on the nipple
Of my dug and felt it bitter, pretty fool,
To see it tetchy and fall out with the dug!
Shake quoth the dove-house: ’twas no need, I trow,
To bid me trudge:
And since that time it is eleven years;
For then she could stand alone; nay, by the rood,
She could have run and waddled all about.

Mixed in with the happy reminiscences of Juliet as a toddler are sadder memories of the nurse’s own daughter, Susan, the same age as Juliet “she was too good for me”, and her husband  “a was a merry man”. It’s no wonder that the Nurse, although small, is seen as one of the best of female roles and has often been played by great actresses such as Flora Robson and Edith Evans.

Was Shakespeare prompted to give his heroine a July birthday because of her name, which he inherited from his source? Setting the play in the heat of an Italian summer “for now these hot days is the mad blood stirring”, this may just have been a happy coincidence.

At Lammas-tide the earliest corn to ripen was made into specially consecrated loaves, a festival celebrating the beginning of harvest. These associations with youth, plenty and ripening grain were also appropriate for Juliet who’s at “a pretty age”. 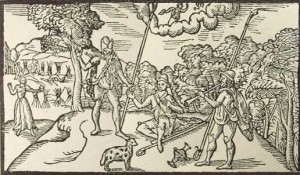 August, from Spenser’s The Shepherd’s Calendar

The reapers in The Tempest have already been gathering in the harvest:
You sunburn sickle men, of August weary
Come hither from the furrow and be merry
Make holiday! Your rye-straw hats put on.

All the advice for country men given by Thomas Tusser’s Five Hundred Points of Good Husbandry is to do with getting in the harvest  to ensure plenty for the winter to come:
Make sure of reapers, get harvest in hand,
the corne that is ripe, doo but shed as it stand.
Be thankfull to God, for his benefits sent
and willing to save it with earnest intent.

And in Fantasticks, probably dating from the early 1600s, Nicholas Breton describes the atmosphere of this time of year: 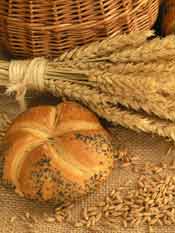 The Pipe and the Tabor is now lustily set on work, and the Lad and Lass will have no lead on their heels: the new Wheat makes the Gossips cake, and the Bride Cup is carried above the heads of the whole parish: the Furmenty pot welcomes home the Harvest cart, and the Garland of flowers crowns the Captain of the Reapers. Oh, ’tis the merry time, wherein honest neighbours make good cheer, and God is glorified in his blessings on the earth.

This sounds like a celebration that ought to be revived, but in any case, enjoy Lammas-tide and its pleasures while you can!