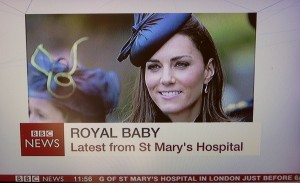 Waking up this morning to the news that Kate has been admitted to hospital in the early stages of labour I cursed myself for not having a blog post about royal babies all ready to go. It has been after all one of the most hotly-anticipated events of recent months.

My first post on this blog, in April 2011, was on the occasion of Kate and William’s marriage, a day of so many Shakespearean resonances that I couldn’t resist it. I wasn’t ready then, either, setting up the blog on one side of the room as, out of the corner of my eye, I could see the preparations at Westminster Abbey on the TV. As the happy couple walked up the aisle together I snapped at the screen and posted the photo along with the blog, just as I’m doing today. 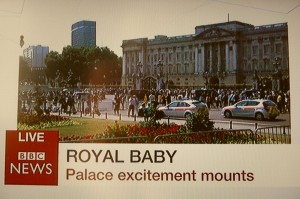 I commented then that Kates haven’t always had an easy time in Shakespeare’s plays, and the same is true of royal babies. Perdita in The Winter’s Tale is rejected by her father as a bastard, though it does her no harm in the end, and Mariana, Pericles’ daughter, is subject to many trials and dangers before she is almost magically reunited with her father.

In some plays, pregnancy adds to the darkness of the play. In Measure for Measure Juliet’s pregnancy reveals her relationship with Claudio and causes him to be condemned to death, and Bertram makes Helena’s pregnancy a condition of his acceptance of her as a wife in All’s Well That Ends Well.

Fortunately for Kate, the question of succession isn’t really the issue (though this baby will almost certainly be third in line to the throne regardless of gender).  But in the current TV drama The White Queen, which dramatises much of the period covered by Shakespeare’s Henry VI and Richard III plays,  it’s made only too clear that the main, if not the only role of the queen is to produce a male heir. 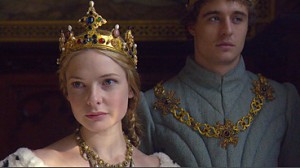 From The White Queen

Last night’s episode was a reminder too of the risks and agonies of medieval childbirth. Here is a link to a post showing medieval representations of childbirth from illuminated manuscripts. The main focus of the series is Elizabeth Woodville, the commoner who married Edward IV. Already a widow, her first three children with Edward were all girls, so the anticipation must have been intense. Only a boy child could hope to improve the chances of an unchallenged succession, and eventually she bore two boys.

But that did not take into account Edward’s early death, leaving her little sons vulnerable to the squabbles of nobles. nor the ambitions of Shakespeare’s Richard III. “Woe to the land that’s governed by a child” was a justified opinion.Elizabeth’s sons are imprisoned in the Tower of London, “Rough cradle for such little pretty ones”, before being murdered on the orders of their uncle. The old queen, Margaret, taunts her:
Where are thy two sons? Wherein dost thou joy?
Who sues, and kneels, and says “God save the queen?
Where be the bending peers that flattered thee?
Decline all this, and see what now thou art:
For happy wife, a most distressed widow;
For joyful mother, one that wails the name;
For one being sued to, one that humbly sues;…
Thus hath the course of justice whirl’d about
And left thee but a very prey to time.

The royal baby that has the greatest impact in Shakespeare is the infant Elizabeth, daughter of Anne Boleyn, carried onto the stage at the end of Henry VIII, and blessed by her father. In a piece of unabashed royalist propaganda,  Archbishop Cranmer prophesies:
Truth shall nurse her,
Holy and heavenly thoughts still counsel her;
She shall be loved and feared: her own shall bless her;
Her foes shake like a field of beaten corn,
And hang their heads in sorrow: good grows with her;
In her days every man shall eat in safety
Under his own vine what he plants, and sing
The merry song of peace to all his neighbours.

But later proclaimed illegitimate, in disgrace, threatened, and put into the hands of unscrupulous guardians, Elizabeth’s early life bore quite a resemblance to those other royal daughters until the tide turned with the death of her sister Mary. 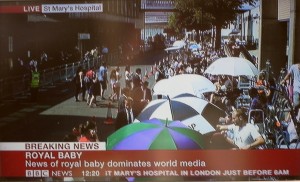 How different is it for the latest royal baby. The world’s media, loving a good news royal story, has gone into overdrive. On the hottest day of the year, sweltering film crews are stationed opposite the hospital hoping for a swift delivery. Kate’s baby, boy or girl, is assured a privileged lifestyle and a good prospect of eventually inheriting the throne. In the mean time we can all enjoy the game of guessing what name will be chosen, and waiting for those first photos.

PS: Unless you have been living in a cave since Monday afternoon, you will already know that Kate’s baby boy was born at 4.24pm on 22 July, weighing 8lb 60z!