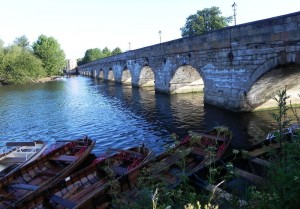 When I chose the sub-title for this blog, I picked “In Shakespeare’s footsteps” partly to suggest that I would be following, rather than stating my own opinions, but also because I love walking. There’s something about the act of putting one foot in front of the other that encourages reflection and I like to think there’s something special about experiencing places he knew in the same way he did.

I’ve always enjoyed showing visitors round the town, but without a carrying voice the job of tourist guide was never an option. But when at the beginning of the year I got an email out of the blue from the Hungarian company Pocket Guide suggesting I might like to write a walking tour of Stratford-upon-Avon which would be published as a smartphone app, I jumped at it.

Now, finally, the app is published.  Shakespeare’s Stratford-upon-Avon leads you around the town from site to site. The GPS system in your smartphone senses when you are approaching one of the points of interest and automatically begins the commentary, then tells you where to go next. Pocket Guide wanted to create walks led by local people who would have their own angle on their special place, rather than using regular tour guides. So I recorded myself reading the commentaries and sent off dozens of photographs of the town.

The tour links people and places around the town with quotations from Shakespeare’s works, and shows how he brought memories of his childhood into the plays. It also records some of the ways in which he is still commemorated in the town.

If you want to experience the app, you can download it from the Pocket Guide website or go to the App Store. It’s available for both Apple and Android systems. First download the Pocket Guide app itself, then search for Stratford-upon-Avon. The free version is immediately available for online use where you have a wifi connection, but for the full effect you need the offline download which costs around £2.  When you’re doing the tour you don’t need to keep stopping to read a guide book or consult a map, though the onscreen map always shows you where you are, and the written commentary can be read on the phone. You can stop half way round and even access it from home to listen again and look at the photos.

If you don’t have a smartphone but would like to hear a sample of the commentary, here’s the section that relates to The Dell, just next to Holy Trinity Church.

Stratford still has its own unique atmosphere and character, but much of this comes back to its most famous resident: the beauty of the riverside, historic buildings and quality shops and restaurants would not be the same without the tradition of visiting the town which has built up over more than two centuries. 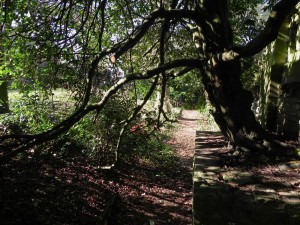 I also believe Stratford is a town best seen on foot, and in an ideal world I would like to see far more people getting out of their cars and walking or cycling round it. Pedestrianising the main streets would allow those with disabilities, children and dogs to move safely and even to enjoy the experience instead of having a constant battle with cars and delivery vehicles. By coincidence an article in this morning’s Times quotes a leading architect, Lord Rogers of Riverside, who believes that within 20 years there will be a widespread ban on cars in London, with cycling helping to solve congestion, and small electric rickshaws to help to take the strain. He also calls for cities and towns to be designed to give priority to pedestrians and cyclists. Apparently several towns are currently discussing pedestrianisation including Oxford, Aberdeen and Brighton. If it was encouraged we might be able to get an even stronger impression of what life was like in Shakespeare’s Stratford-upon-Avon.