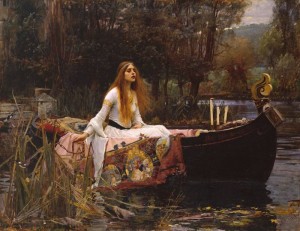 For the next ten days, until 25 August, copies of 57 British works of art will be displayed in thousands of locations in the UK: at bus stops, billboards and shopping centres. It’s billed as the world’s largest art show. They were chosen by members of the public from a long list created by a panel of  experts including curators and artists. The project is called Art Everywhere and is the result of a partnership between Richard Reed (co-founder of Innocent Drinks), The Art Fund, Tate and the poster industry, and is being publicised by the Guardian.

Digitisation of paintings is opening up access in all kinds of ways, and although it’s great to be able to see these images on our computer screens or smartphones it’s refreshing to see images of them at full size or larger. To find them invading places where we would normally expect to see advertisements may make our streets more attractive and make us look more closely at the images themselves.

The variety of images shows clearly how techniques and subject matter has changed from the sixteenth century to the present day, but the Guardian reveals that numbers 1 and 2 were John William Waterhouse’s The Lady of Shalott and John Everett Millais’s Ophelia. It’s not surprising that these two paintings made it to the final ten, but it does surprise me that these, with so many similarities in style, date and subject, should be the top two. Both are based on famous literary works, the one by Tennyson, the second by Shakespeare, painted in the Victorian period, and both tell the story of a tragic young woman who drifts to a watery death. 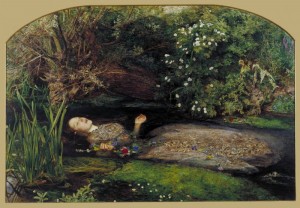 Millais’s painting of Ophelia is the most famous painting based on Shakespeare, much copied (though until I saw these two side by side it never occurred to me that the Lady of Shalott owed so much to the Millais Ophelia, created thirty years earlier).

Your Paintings is a joint initiative between the BBC, the Public Catalogue Foundation and participating UK collections which has resulted in around 200,000 paintings being viewable online as a national collection. It’s a fantastic resource which anyone can explore. A search for Ophelia, for instance, results in 19 hits most of which are not particularly familiar.

Just recently the Getty trust has adopted their Open Content Program ” because we recognized the need to share images of works of art in an unrestricted manner, freely, so that all those who create or appreciate art—scholars, artists, art lovers, and entrepreneurs—will have greater access to high-quality digital images for their studies and projects. Art inspires us, and imagination and creativity lead to artistic expressions that expand knowledge and understanding.”

In a blog, they suggest that Open Content is an idea whose time has come. Initially they are making 4,600 of their images available to repurpose, but this number will grow, and they are searchable through the Getty Search Gateway.

On another website, Open Glam, there’s a list of Open Collections, a real treasure trove of glorious material to be searched and enjoyed.

Going back to Ophelia and the Lady of Shalott, why are they so popular as paintings? Is it the gorgeous detail of the painting, the associations with the original works of literature, the character depicted, or the history of the painting itself? One of the reasons for the fame of the Millais painting is the story that the model for the painting, Elizabeth Siddall, became seriously ill after spending so much time lying in a bath of cold water, the painter having been oblivious to her state.

The Shakespeare Birthplace Trust’s current exhibition being held at Nash’s House is based on a survey to find Shakespeare’s most popular characters. Each one has been given a display case (except for Romeo and Juliet who share one) in which a mix of items from the Collections are displayed such as original swords for Mercutio, books like Burton’s Anatomy of Melancholy for Hamlet and theatrical costumes like a head-dress for Cleopatra. The exhibition is pulled together by Ailsa Burrows’ charming and witty cartoons for each character and although it’s aimed mainly at children it’s worth a look for adults too. The top ten in the exhibition are: 1. Juliet, 2. Hamlet, 3. Bottom, 4. Beatrice, 5. Mercutio, 6. Romeo, 7. Falstaff, 8. Macbeth, 9. Henry V, 10. Cleopatra.

I was disappointed not to find Ophelia in the top ten as she has such a strong hold on our imaginations and has been so often represented in art and literature. She may not be as romantic or gutsy as the three women in the list, but who wouldn’t want to be Hamlet’s girlfriend, at least before it all begins to unravel?

This entry was posted in Legacy, Stratford-upon-Avon and tagged Art Everywhere, Getty Foundation, Millais, Ophelia, Tennyson, The Lady of Shalott, Waterhouse, Your Paintings. Bookmark the permalink.