Shakespeare’s collaborators in the Elizabethan and Jacobean theatre 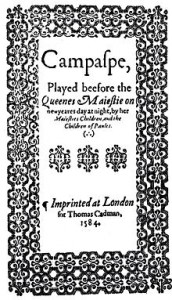 After far too long being seen in isolation, Shakespeare is increasingly seen as but one of many writers of the late Elizabethan and early Jacobean periods. Just recently there have been many studies looking at those other writers who inspired Shakespeare, or with whom he may have collaborated.

John Lyly was one of the first writers for the stage, from the early 1580s writing entertainments to be performed by the boys companies in London at the Blackfriars Theatre. One of his most successful plays was Campaspe. This prose comedy tells the story of the famous classical emperor Alexander who brings from Thebes captives including the beautiful Campaspe. He falls in love with her and commissions the artist Apelles to paint her. The pair fall in love and Alexander allows them to marry, resisting love in favour of the real employment of a leader, the conquering of Persia. “Thou shalt see that Alexander maketh but a toy of love”, he says.

The title page of the quarto indicates that the play was first shown at Blackfriars, presumably a sort of dress rehearsal before being presented before Queen Elizabeth at the court on New Year’s Day. It must have had some resonance for the Virgin Queen who also turned her back on marriage in favour of rule. The actors were the boys companies of Her Majesty’s Children, and the Children of Paules. Lyly was a great influence on later writers, but he had stopped writing plays by the 1590s in favour of a more political career. There’s a great introduction to this neglected writer in this short film, and longer interviews with Lucy Munro and Andy Kesson. 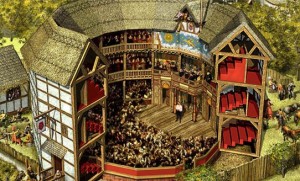 John Wyver always turns up fascinating material in his Illuminations blog, and this post, about TV versions of non-Shakespearean plays (to be the focus of an issue of Shakespeare Bulletin in 2015), includes a rare clip of a scene from Robert Greene’s play Friar Bacon and Friar Bungay. Greene was responsible for the first allusion to Shakespeare as a playwright, describing him as “an upstart crow” and “the only Shake-scene in a country”. 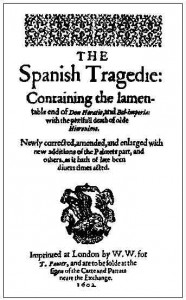 It’s now acknowledged that the writing of plays for the Elizabethan and Jacobean theatre was a complex and collaborative business. The text of The Spanish Tragedy, attributed to Thomas Kyd, is an example of such a play. It has long been speculated that  the additional passages that appeared in the 1602 4th quarto of the play were written by Shakespeare. These arguments have been based on studies by Brian Vickers looking at vocabulary, but Douglas Bruster now claims to have found additional parallels between the spellings of words in these passages and the three pages of the Sir Thomas More manuscript. This is of course a tricky argument: nobody can be 100% sure that Shakespeare wrote these pages, but here’s a link to Bruster’s article, and another to the New York Times article on the subject. 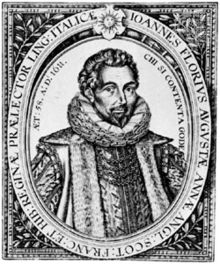 It’s much more common to find the hands of other writers such as John Fletcher in work ascribed to Shakespeare. Saul Frampton is currently writing a book on John Florio and Shakespeare. Florio is often suggested as the model for Holofernes in Love’s Labour’s Lost and the play’s title may refer to one of Florio’s phrases.  Florio’s wife has often put forward as a candidate for Shakespeare’s Dark Lady of the sonnets.

In an article in The Guardian Frampton suggests that Florio supplied the sonnets to the publisher as an act of revenge for Shakespeare’s affair with his wife, and that he was the author of A Lover’s Complaint.

A Lover’s Complaint was published as an appendix to the Sonnets, written in an antiquated style quite unlike Shakespeare’s. Here’s a sample:
From off a hill whose concaue wombe reworded,
A plaintfull story from a sistring vale
My spirits t’attend this doble voyce accorded,
And downe I laid to list the sad tun’d tale,
Ere long espied a fickle maid full pale
Tearing of papers breaking rings a twaine,
Storming her world with sorrowes, wind and raine.

He suggests there is internal evidence of Florio’s authorship in the choice of vocabulary: ” …it features a host of words never used by Shakespeare and rarely or never by his contemporaries, yet which can nevertheless be found in Florio. For example, neither Shakespeare nor Marlowe nor Jonson use “storming”, “defiling”, “maund”, “blend”, “blazoned”, “outwards”, “gouty”, “amorously”, “oblations”, “plenitude”, “laugher”, “weepingly” “vnshorne”. All are used by Florio repeatedly”.”

In the article about The Spanish Tragedy academic Tiffany Stern sounds a note of caution: “The arguments for ‘The Spanish Tragedy’ are better than for most” putative Shakespeare collaborations, Ms. Stern said. “But I think we’re going a bit Shakespeare-attribution crazy and shoving a lot of stuff in that maybe shouldn’t be there.”  Maybe we will never know for sure, but in the mean time the arguments will run and run.