“Summer’s lease hath all too short a date”: the end of the holidays

August, from The Shepheardes Calendar, showing the wheat harvest in sheaves.

26 August was the Summer Bank Holiday in the UK, the last official holiday until Christmas. And the end of August, though still summer, always feels like the end of the holiday season. Holidays have very different meanings to us today from how they were seen in Shakespeare’s day. When Shakespeare refers to a holiday he means just that, a single “holy day”, though I don’t know how many of the religious festivals and saints’ days that were in the Catholic calendar were still celebrated in Protestant England. Holidays were days of good cheer, as with Rosalind who finds herself in a “holiday humour”, and Fenton in Merry Wives who “speaks holiday, he smells April and May”.

Holidays were always greatly anticipated, as Hal says in Henry IV part 1:
If all the year were playing holidays,
To sport would be as tedious as to work;
But when they seldom come, they wish’d for come,
And nothing pleaseth but rare accidents.

Nowadays we think of summer holidays as the time when we relax, but in the sixteenth century this was the busiest time of year. Our old friend Thomas Tusser organised his Five Hundred Points of Good Husbandry month by month, running from September to August, as this month is the culmination of all the work done during the year. Husbandry is all about looking to the future, gathering in the harvest and preparing for both the winter to come and the following year. Jobs included gathering ripe seeds to store:
Good huswifes in sommer will save their owne seedes,
against the next year, as occasion needes.

Harvesting corn, mowing barley, storing grain in the barn, gathering hops, cutting and taking home fuel such as wood, turf and charcoal, are all on the list for August. The 24th August was St Bartholomew’s day, a good time to sell produce and to think about some DIY.
At Bartilmewtide, or at Sturbridge faire,
buy that as is needfull, the house to repaire:
Then sell to thy profit, both butter and cheese,
who buyeth it sooner, the more he shall leese.

It’s not that many years ago that whole families would leave the city for a few weeks in the summer, not for a holiday as we would recognise it, but to help with harvesting crops in the countryside. Our long school summer holidays come from this tradition rather than the desire to give everybody a restful break.

Farmers today still look out for the “foul weather” at harvest time which Richard II speaks of as spoiling crops and making “a dearth in this revolting land”. A man’s beard is “made rough and rugged,/Like to the summer’s corn by tempest lodged”. And we  know what Hotspur means when he talks about a man’s “chin new reap’d [that]/ Show’d like a stubble-land at harvest home, although farming practices have changed so that we no longer see “summer’s green all girded up in sheaves”.

Both authors refer to gleaning, where poorer people were allowed into the fields to pick up grains that had fallen on the ground. “Corne carried, let such as be poore go and gleane”, says Tusser, and in As You Like It the lovesick shepherd Silvius agrees to act as a messenger between his Phebe and a rival suitor.
So holy and so perfect is my love,
And I in such a poverty of grace,
That I shall think it a most plenteous crop
To glean the broken ears after the man
That the main harvest reaps; loose now and then
A scatt’red smile, and that I’ll live upon. 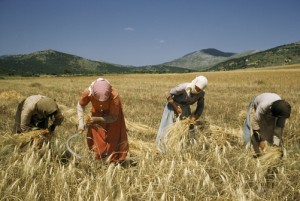 Women in Greece harvesting in the traditional way. http://www.natgeocreative.com/photography/1098541

The end of harvest is the time to party. The reapers in The Tempest are allowed to enjoy themselves once they’ve done all the work of getting the harvest in:
You sunburnt sicklemen, of August weary,
Come hither from the furrow and be merry:
Make holiday; your rye-straw hats put on.

This was a time to rejoice and to look forward after doing all you could to prepare for the year ahead. It’s been a warm and fruitful summer: enjoy the rest of your holidays and let’s hope for a winter that like Adam’s old age is “frosty, but kindly”.

This entry was posted in Shakespeare's World and tagged August, harvest, holiday, summer. Bookmark the permalink.

One Response to “Summer’s lease hath all too short a date”: the end of the holidays