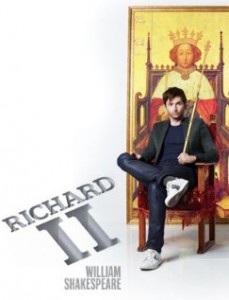 There are now less than two weeks to go until the RSC’s most-hyped production of the last few years, Richard II, has its first performance. With David Tennant playing the leading role, all the Stratford performances were sold out months ago. Although information about the production was slight to begin with, since rehearsals began the RSC has been making material of many kinds available online. And well it might: this is the first RSC production to be transmitted, live, to cinemas, which means the production has a potential audience many times greater than could be reached in the theatre.

The RSC has been whipping up the anticipation by releasing production diaries in video form, and John Wyver, the RSC’s Media Associate has been writing fascinating posts for his Illuminations blog describing rehearsals.  As well as the RSC Live from Stratford-upon-Avon on 13 November, the production is also being streamed to large numbers of schools, and a free Education Pack The Director’s Process, is now available to download. It’s aimed at KeyStage 1, but it makes interesting reading for anyone who wants to know more about this production. 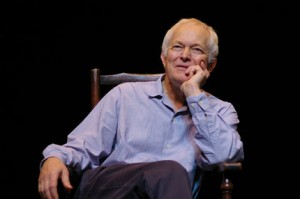 For this key production Doran has attracted a strong cast with years of experience of Shakespeare, some of whom have worked together before. Both Oliver Ford Davies, playing the Duke of York, and Jim Hooper, the Bishop of Carlisle, were in David Tennant’s Hamlet, and Greg Doran directed Michael Pennington (John of Gaunt) as Timon of Athens a few years ago. Pennington also narrated Doran’s puppet version of Venus and Adonis. And Jane Lapotaire, playing the Duchess of Gloucester, played Queen Katherine in one of Doran’s first productions, Henry VIII, in 1996. Back in the 1980s Pennington himself played Richard II for the English Shakespeare Company which he co-founded with director Michael Bogdanov. Over several years the ESC performed a complete history cycle which they toured around the country and which subsequently became even better known by being filmed. Michael Pennington is also performing his one-man show, Sweet William – My life with Shakespeare, at the Swan Theatre on 20 October. Pennington is one of the finest speakers and interpreters of Shakespeare and this is certain to be a treat.

The production of Richard II is also the beginning of Doran’s intended cycle of productions of all of Shakespeare’s plays. After a number of recent attempts by the RSC and other companies to perform all the plays within a short period of time, he’s allowing each one room to stand on its own. It’s notable, though, that with these history plays he’s following a chronological sequence: in 2014 both parts of Henry IV are to be performed.

The idea of the history cycle goes back well over a century: John Wyver reports in his blog that on the first day of rehearsal Greg Doran quoted W B Yeats’ description of his experience seeing Frank Benson’s Week of Kings at the Shakespeare Memorial Theatre in 1901:
“I have seen this week King John, Richard II, the second part of Henry IV, Henry V, the second part of Henry VI, and Richard III played in their right order, with all the links that bind play to play unbroken; and partly because of a spirit in the place, and partly because of the way play supports play, the theatre has moved me as it has never done before. That strange procession of kings and queens, of warring nobles, of insurgent crowds, of courtiers, and of people of the gutter has been to me almost too visible, too audible, too full of an unearthly energy.”

You’ll notice that this History Cycle omitted several of Shakespeare’s plays, some of which were thought to be unstageable. In 1906 Benson had another try, performing all the plays from Richard II to Richard III including all three parts of Henry VI but, inexplicably, the sole omission was that crowd-pleaser Henry IV Part 1. At the centre of this cycle was Frank Benson in the part for which he was best known, Richard II. It’s a play with a long and distinguished history, and we’ll be waiting to see what this one reveals about the here and now.