An obscure grave: did Shakespeare write the memorial verses at Tong? 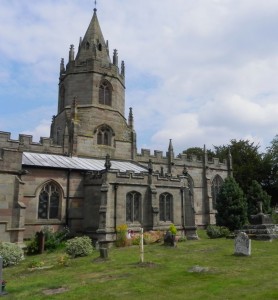 The church in Tong

A couple of years ago I wrote a piece about the two epitaphs inscribed at the ends of  a tomb in the church in the village of Tong, Shropshire. I was intrigued by them, and by the tradition that the verses were written by Shakespeare. Rarely mentioned in biographies, I had never previously come across the story.

Soon afterwards Helen Moorwood informed me she was writing a book on the subject, now published under the title Shakespeare’s Stanley Epitaphs in Tong Shropshire.

The notion that Shakespeare wrote epitaphs for members of the Stanley family is related to the theory that he worked for a time in Lancashire for Alexander Hoghton of Lea Hall, a Catholic landowner. Ernst Honigmann’s 1985 book Shakespeare: the Lost Years set out the story.

The epitaphs can be seen as a confirmation of the Lancashire theory, and Helen Moorwood gives a lot of space to discussing it. If true, it would explain how Shakespeare met people who cropped up later in his life, how he had access to books he’s known to have read, and what he was doing in his “lost years”, though Alexander Hoghton’s will, which might place him in Lancashire, is dated 1581, before they are usually reckoned to begin.

The existence of the epitaphs, though, doesn’t rely on the Lancashire theory. Helen Moorwood aims to solve the mystery of how and why they came to be where they are. On her way she explores many documentary resources on what she calls her detective hunt. As well as questioning the authorship of the verses, her exploration also raises the question of why, when they still exist intact, they have been neglected for so long. They are, incidentally, fiendishly difficult to photograph. 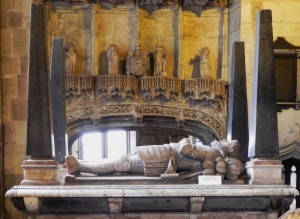 The tomb is for Sir Thomas (died 1576) and Lady Margaret Stanley (died 1596), with their effigies on the upper level and that of their son Sir Edward (died 1632) below. One of the reasons for disregarding the lines has been that the dates don’t match those of Shakespeare’s life. But it was not uncommon for people to have their tombs created while they were still alive, and Helen Moorwood estimates that Sir Edward commissioned his around 1601-2. Another issue may be the quality of the verse, but we need only look at the variety of verses on Shakespeare’s grave and monument to see that not too much should be read into them. It’s often suggested that Shakespeare wrote the doggerel on his gravestone but there’s no evidence, and none of the lines have much in common with Shakespeare’s acknowledged works.

Also in Holy Trinity Church, close to Shakespeare’s tomb, is the tomb to John Combe who died two years before Shakespeare. The story surrounding this tomb just shows how difficult it can be to pin down the truth. Shakespeare is said to have written some verses that were “fastened upon a tomb”. They refer to Combe’s money-lending activities, and were published in 1618. In spite of this I have found no fewer than five different versions of the inscription just among my own books. In 1634 Lieutenant Hammond who surveyed the monuments attributed lines to Shakespeare (though he didn’t quote them), but by 1672 they had been removed. It seems unlikely to me that the lines below were ever affixed to Combe’s dignified and very expensive tomb, and suspect the story has fallen prey to what Samuel Schoenbaum calls “the machinery of myth”. This version is in Shakespeare for All Time, by Stanley Wells.
Ten in the hundred here lies engraved
A hundred to ten his soul is not saved.
If anyone ask who lies in this tomb,
“O ho!” quoth the devil, “’tis my John-a-Combe”.

Shakespeare does seem to have been commissioned to write occasional verses. In March 1613 the Earl of Rutland’s steward recorded the payment of 44 shillings each “to Mr Shakespeare in gold about my Lord’s impresa“, and to Richard Burbage for painting and making it. The impresa was an insignia complete with mottoes used at the tournament to celebrate the anniversary of the King’s accession. There is no record of the impresa.

Helen Moorwood sets out to correct centuries of neglect by bringing the Tong inscriptions to the attention of scholars researching Shakespeare’s biography, and the book often reads like a personal crusade. She has gone to heroic lengths to sort out the complicated relationships within the Stanley family. Her own transcriptions of key documents will also provide a great starting point to future researchers.

Part of the inscriptions

This is her modernised transcription of the verses:
(at the foot)
ASK WHO LIES HEAR, BUT DO NOT WEEP;
HE IS NOT DEAD, HE DOTH BUT SLEEP.
THIS STONY REGISTER IS FOR HIS BONES;
HIS FAME IS MORE PERPETUAL THAN THESE STONES.
AND HIS OWN GOODNESS, WITH HIMSELF BEING GONE,
SHALL LIVE WHEN EARTHLY MONUMENT IS NONE.
(at the head)
NOT MONUMENTAL STONE PRESERVES OUR FAME,
NOR SKY-ASPIRING PYRAMIDS OUR NAME.
THE MEMORY OF HIM FOR WHOM THIS STANDS
SHALL OUTLIVE MARBLE AND DEFACERS’ HANDS.
WHEN ALL TO TIME’S CONSUMPTION SHALL BE GIVEN,
STANDLEY, FOR WHOM THIS STANDS, SHALL STAND IN HEAVEN. 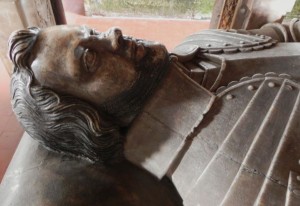 The first known copy of these is a manuscript by antiquarian John Weever. Although Weever knew Shakespeare’s work, he does not suggest he wrote these lines. This document could be dated as early as 1620 but as both he and Sir Edward died in 1632, it must be before that date. Several other manuscripts from later in the 1600s suggest Shakespeare wrote the verses,  including one by Sir William Dugdale. Dugdale visited Shropshire in 1663 while researching his Antiquities of Shropshire,  and his notes include a transcription of the verses, with the word “Shakespeare” in the margin and the note “These following verses were made by William Shakespeare the late famous tragedian”. Sadly the book was never published, which would have fixed the date more positively. But assuming it’s genuine, it puts the date of attribution to Shakespeare well before he became fashionable in the eighteenth century.

The Tong inscriptions seem to me to merit at least as much attention as the other memorial verses attributed to Shakespeare. Helen Moorwood’s efforts may now lead to their proper consideration.