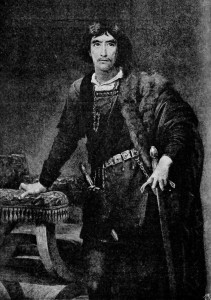 Rather late in the day I heard that 10 October 2013 is being celebrated as the first Stage Management Day. Stage managers are some of the unsung heroes of the theatre world, people who the audience rarely sees, but who make every theatre performance happen. Their work varies according to the size of the theatre company, but stage managers always attend rehearsals, recording decisions that are made and passing on information about them to other departments. Once the play gets into the theatre, they coordinate the activities of other members of staff including lighting, music and stage crew, ensure that personal props are ready to be taken on stage as well as cueing the actors’ entrances and exits. In any live performance, particularly of a play of the complexity of Shakespeare’s, there are many things that can go wrong.  It’s a job that requires a cool head.

But as well as taking part in each and every stage performance, stage managers also contribute to the permanent record of theatre productions. The stage management team create the prompt book, the copy of the text of the play that contains the information described above. And the prompt book is the most important of the production records that will, hopefully, end up being archived. 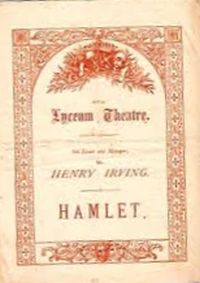 On Wednesday morning I spent some time consulting a book created by a stage manager over one hundred and thirty years ago. Its survival alone is remarkable: prompt books tend to be heavily-used and this one certainly showed signs of wear. It is the prompt book for one of the most important Victorian productions of a Shakespeare play, Henry Irving’s Hamlet.

The occasion was a seminar organised by the Shakespeare Institute Library, and brought together a group of users of theatre archives, looking at potential uses of archive materials from the Shakespeare Centre Library and Archive’s collections. As part of this seminar we were asked to look closely at a couple of items. 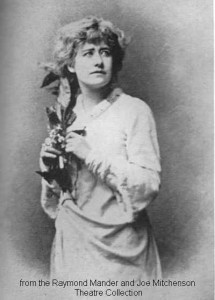 My group picked the Henry Irving prompt book and an image for his production at London’s Lyceum Theatre. Henry Irving became the most important actor of his time, and Hamlet, which he first played in 1874, was his first major Shakespeare role, to be followed by Macbeth, Othello, Richard III and many others. Hamlet ran for two hundred consecutive performances and it was brought back into his repertoire when he took over as actor-manager of the Lyceum Theatre in 1878 with the brilliant actress Ellen Terry playing Ophelia at the beginning of their twenty-year partnership.

In the Athenaeum review dated 4 January 1879 Joseph Knight described the production: ‘Scenic accessories are explanatory without being cumbersome, the costumes are picturesque and striking and show no needless affectation of archæological accuracy and the interpretation has an ensemble rarely found in any performance’.

Irving’s performance was intellectual and refined, and under his management the theatre became respectable, Irving being the first actor to be knighted. A flavour of his performance can be heard in this recording of him in 1898 delivering a speech from Richard III.

Irving is an actor whose charisma still reverberates with researchers. The Irving Society was founded in 1996 and continues to promote the appreciation of Irving and his cultural and artistic contribution. And the Henry Irving Archive is a digital resource for scholars and students that includes among other things a biography of Irving and a bibliography.

Irving was a keen letter-writer and the Henry Irving Correspondence Project is a wonderful resource that summarises 8642 letters to and from Irving, bringing together material from a number of different collections. 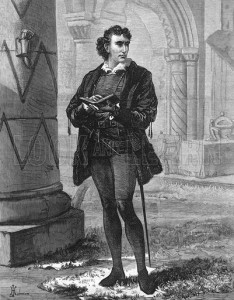 But although personal letters offer a fascinating insight into his life and opinions, they don’t tell us what Irving’s Hamlet production was like. For this, we need the prompt book. At the seminar, we were asked to think about the sort of evidence it supplied, and how this information might be used. This prompt book is a particularly excellent resource: to begin with the heavily-edited script gives a good idea of which elements of the play were deemed most important. The book contains information about actors’ moves as well as some diagrams showing the stage layout and positioning of actors for important scenes. One of the most useful features of the book is the insight it gives into theatre staging methods. And, very unusually, there is a water-colour illustration showing how the ghost appeared, standing on a rock in front of a turbulent sea. Did the stage-manager paint this scene, I wonder?  It must have been an impressive spectacle, probably relying on the use of stage machinery to produce the effect of waves.

As so often with theatre archives, the prompt book isn’t quite what it appears. The book has been dated 1874, the date of Irving’s original production. Yet as we noticed, the book is Irving’s own edition of the play, based on his stage version. This couldn’t have been available before the first performance and in fact it appears to have coincided with the 1878-9 production. Presentation copies of prompt books were sometimes created in memory of famous productions, but this isn’t one of those. From the additional cuts in the text, the markings in more than one hand, and the dilapidated state of the book itself, it was obviously used over a period. I’d guess that this book was created by the stage manager of the 1878-9 production, which he knew would be an important interpretation of the play and so, perhaps, made it particularly impressive. Stage managers deserve to be celebrated, and not just because they make sure the performance is all right on the night.