Shakespeare’s histories onscreen: An Age of Kings, The Hollow Crown and Richard II 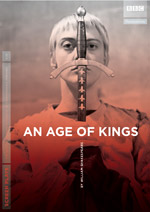 I’ve just heard the great news that An Age of Kings, the first filmed history cycle, is finally about to be made available on DVD to the UK (Region 2). Perversely, the series has been on sale in the USA (Region 1) for several years.

This hugely influential series was screened on TV in 1960. It launched a number of careers but, coming just at the moment when the RSC was being formed it also paved the way for the RSC’s own Wars of the Roses project which came to define the company.  Here’s the link to the Illuminations blog, and this description is quoted from the MovieMail page for the DVD set:

An Age of Kings is BBC Television’s compelling production of William Shakespeare’s great national pageant of eight History plays. In 1960 the series marked a significant television moment when its fifteen live episodes were broadcast fortnightly on Thursday evenings throughout the summer and autumn.

Each play from Richard II to Richard III was allotted two episodes, roughly an hour in length, excepting only Henry VI part 1 which was cut back to a single programme. The critic for The Guardian praised this ‘tremendous project’ and hailed it as ‘ambitious … exciting … a striking example of the creative use of television’. 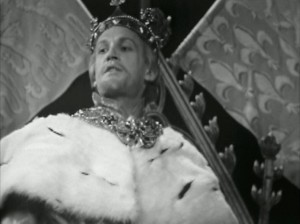 David William as Richard II in An Age of Kings

The episodes were regularly watched by more than three million viewers. But in making An Age of Kings, the BBC was not principally in the hunt for ratings. Rather, this was Britain’s public service broadcaster demonstrating to and for the nation its unique strengths and abilities. Even so, An Age of Kings was repeated by the BBC only once, between January and April 1962.

For more than fifty years this television landmark has been entirely unavailable in Britain. Watching it today, although certain allowances need to be made for its 405-line monochrome images, the drama of power politics, betrayals, deceptions and deadly rivalries is as alive as ever. So too is the beauty of some of Shakespeare’s greatest poetry and prose.

An Age of Kings is distinguished by a rigorous approach to the text, by Michael Hayes’ frequently inventive direction and by numerous performances of the highest achievement. Here are Frank Pettingell and Angela Baddeley at a late stage in their successful stage and film careers, alongside Robert Hardy, Eileen Atkins, Judi Dench and Sean Connery, among many others, at the beginning of theirs.

An Age of Kings was the first production in Britain, whether in the theatre or on the screen, of all eight Histories as a coherent single story. Its production remains the only occasion when a single company and production team has taken on all of the plays for television. More than five decades after it was first seen, the series is vivid and vibrant drama, with an unparalleled clarity and immediacy, sense of scale and poetic depth. 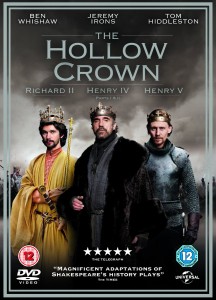 This issue has been working the same, in reverse, with The Hollow Crown, the series that covered Richard II to Henry V, that first appeared on UK screens during the summer of 2012. Before the end of the year it was published on DVD for Region 2. So popular has the series been that it has generated a group dedicated to it on Twitter, @HollowCrownfans.  The hottest topic of debate has been the delay in broadcasting the series in the USA and the slow availability of the four plays on DVD for Region 1, and they’ve been using #HollowCrownDVD for their discussions. But now it’s been published on DVD and the series is currently being screened in many parts of the USA, where it’s also available to watch again for a limited period. It’s been terrific to hear the enthusiastic comments of viewers, many of whom had never seen Shakespeare before.

The RSC’s Richard II, which is about to begin its previews, is to be the first of the company’s productions to be live-streamed to cinema audiences. This will surely become available on DVD in due course, but the RSC has just announced that it’s releasing a CD of famous speeches and music from the production on 18 October. This will be a treat, though as the previews don’t begin until 10 October the recordings will have been made before the production has actually made its way onto the stage.

An Age of Kings will be published in the UK in December, a long-overdue addition to the range of versions of Shakespeare’s history plays available to purchase, as well as being essential for anyone interested in the history of Shakespeare in the media.

This entry was posted in Legacy and tagged @HollowCrownfans, An Age of Kings, History cycle, Illuminations, Richard II, Royal Shakespeare Company, The Hollow Crown, The Wars of the Roses. Bookmark the permalink.

4 Responses to Shakespeare’s histories onscreen: An Age of Kings, The Hollow Crown and Richard II