Shakespeare on film and TV 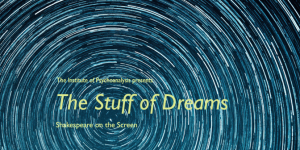 In the past few weeks there have been several developments relating to Shakespeare on film and TV. On 26 January 2014 a programme entitled The Stuff of Dreams begins, run by the Institute of Psychoanalysis.  Once a month there will be a film screening hosted by a psychoanalyst in discussion with an actor or director who has worked extensively with the play being considered. The venue will be the Institute of Contemporary Arts in London. The high-profile guests include Juliet Stevenson, Simon Russell Beale and Max Stafford-Clark. The first meeting will show Henry IV part 2, which formed part of The Hollow Crown, screened by the BBC in 2012. It will be hosted by psychoanalyst Michael Brealey with special guest Sam Mendes. Other films to be screened during the years include the Peter Brook King Lear and Orson Welles’ Othello. 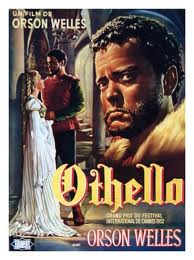 Orson Welles’ Othello, one of the film versions being shown

To celebrate the 400th anniversary of Shakespeare’s death in 2016, BBC’s  Director General, Tony Hall,  has announced plans for the corporation to digitise the BBC’s Shakespeare archive, making it available for free to those in education and learning in the UK. He said ” I want to really celebrate Shakespeare in 2016. We’ll find the gems in our archive: our extensive television and radio collection of Shakespeare’s plays and poems, programmes about Shakespeare, as well as scripts, stills and production notes. We will aim to make these available to schools across the country. Where rights allow or through BBC Store, we will make them available more widely still.” It’s very much to be hoped that these fabulous resources will be made available to everyone, not just those in formal education. Full details of this exciting development are not available yet but will be forthcoming.

One bit of the BBC’s Shakespeare history, in fact one of the most important bits of that history, is about to be made available in Europe for the first time. This is An Age of Kings, screened in 1960 and apart from a repeat in 1962 never seen since in the UK. The Illuminations blog gives more details: 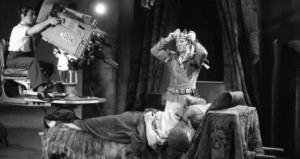 A still from An Age of Kings

“An Age of Kings has never previously been released for home video in the UK and it has been seen only very occasionally since the single repeat of the series in 1962. Yet it is a wonderful compelling account of all eight of Shakespeare’s histories, with a stellar cast including Robert Hardy, Judi Dench, Eileen Atkins and Sean Connery. This landmark production was broadcast live from, first, Riverside Studios and then Television Centre, on Thursday evenings once a fortnight from April to November 1960.”
Illuminations is releasing this cycle on 8 December as a 5-disc DVD set. An Age of Kings inspired the RSC’s Wars of the Roses cycle, and much else besides. Orders are being taken and there’s a link to the order page from the post, as well as a preview of Robert Hardy as Henry V performing the “Once more until the breach” speech”. I’ve already put in my request to Santa.

The Illuminations blog is written by John Wyver, who is responsible for a huge range of things relating to Shakespeare on TV and film. Although he is usually upbeat, I was interested to read his grumpy (his word) post about the importance of retaining the original aspect ratio for archive material when transmitting on modern TVs. He explains the issue:

“Filmmakers who wish to include older archive material in contemporary programmes have the option either of ‘pillar-boxing’ – that is, including the full frame and putting black bars to either side of the image – or of carving out a 16:9 frame from the middle of the 4:3 original and so losing around 30 per cent of the picture.”

He describes what was done to a recently-screened archive film about Benjamin Britten as “vandalism”. You can see more here.

It’s a close call, but if you’re within reach of Cardiff, John Wyver is talking at Cardiff University as the Cardiff MEMORI lecture on Thursday 28 November at 5.15 on the subject “Sad Stories of the death of kings: Monarchy, Government and Shakespeare’s Histories on Television, 1957-1965″. Full information is available here. This will include both An Age of Kings and the RSC’s Wars of the Roses trilogy, both influential series that inspired many people with an interest in Shakespeare, just as 2012’s Hollow Crown series has done.

This entry was posted in Legacy, Shakespeare on Stage and tagged An Age of Kings, BBC, Illuminations, John Wyver, Shakespeare on film, Wars of the Roses. Bookmark the permalink.