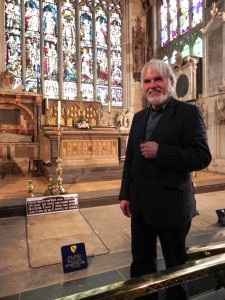 Dr Robert Bearman by the grave of Shakespeare

Nobody knows more than Dr Robert Bearman about the history of Shakespeare in Stratford. As Head of Archives and Local Studies at the Shakespeare Birthplace Trust he was in charge of the priceless documents which he wrote about in his 1994 book Shakespeare in the Stratford Records. In the book he used his decades of experience of working with local documents to put those relating to Shakespeare into context.

So when he began talking last Wednesday it was no surprise to hear him saying that his approach to the story of the ledger stones relating to the Shakespeare family was to go back to the earliest documentation he could find. As with everything to do with Shakespeare, myths and legends have sprung up and acquired the status of fact in even the most respectable of biographies.  But Bob is an expert on disentangling the tangled web of fact and fiction.

While everyone knows that the Shakespeare stone lies close to the monument, anyone who has never visited the church might not be aware that there are five of these ledger stones devoted to members of Shakespeare’s family. They are positioned in a line just inside the altar rail, left to right: Anne Shakespeare, William Shakespeare, Thomas Nash, John Hall and Susannah Hall. To make it more complicated they can only be read from the altar side.

The first question asked by Dr Bearman was “How sure can we be Shakespeare was buried here?” He noted that in his will Shakespeare did not specify that he should be buried in the church, and left no money for a monument. By contrast John Combe, who died in 1614,  left £60 for his magnificent tomb. I had heard that Shakespeare was entitled to burial in the chancel by virtue of being a tithe-holder, but Dr Bearman was quite clear that the only deciding factor was whether you could afford the fees. There is, famously, no name on the stone, unlike the other four, just the curse. And on the monument itself the name is only “Shakespeare” rather than the full name.

Dr Bearman confirmed that there was enough evidence to be confident that Shakespeare was indeed buried in the church, including the poem in Shakespeare’s 1623 First Folio referring to the Stratford monument, by Thomas Digges: 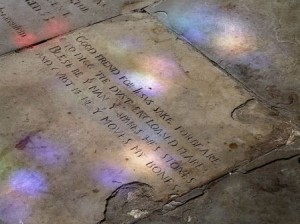 Shakespeare, at length thy pious fellows give
The world thy Workes; thy workes, by which outlive
Thy tombe,  thy name must; when that stone is rent,
And Time dissolves thy Stratford Moniment
Here we alive shall view thee still.

Several different notes, some as early as the 1630s, reproduce the verse inscription, associating it with Shakespeare. Inevitably, there are anomalies: the verse on the monument declares that Shakespeare is buried within it, obviously not the case. It’s known that the monument was made in Southwark, near to the Globe, and Dr Bearman commented that perhaps the making of the monument itself was overseen by Shakespeare’s colleagues who were not aware of how it was to be placed in the church.

What became obvious during the talk, though, was the cavalier attitude of those in charge of the church in centuries gone by. A plan of the chancel floor was made in 1836, showing a multitude of ledger stones placed there for people who had paid for the privilege. But since then most have these have been moved or covered up. Changes have happened as a result of, among other things, improving the heating in the church, and the steps have been moved. For many years the Shakespeare graves were in front of the altar rail allowing visitors to walk over them, a problem eventually resolved when the altar rail was moved further down the chancel in the 1880s. It seems, though, that in spite of  the large number of changes the five Shakespeare stones have remained in much the same place since the mid-seventeenth century. 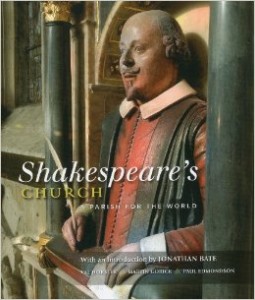 Questions remain: Halliwell declared in 1883 that the original stone covering Shakespeare’s grave had been replaced because it was so worn, but Dr Bearman was unconvinced, not least because Halliwell changed his story when challenged. Other accounts of work done on the stone mentions cleaning and, in the 1840s, deepening the lettering, but not replacement.

The story that Shakespeare was buried seventeen feet deep seems to be just that, a story that emerged many decades later. And as for the opening of the tomb, Dr Bearman was sceptical about all of the stories of accidental breaches that have circulated for a couple of centuries. A fuller account of the monument and graves can be found in Val Horsler’s book Shakespeare’s Church, published in 2010.

If you want to catch the last of these talks, it will be held on Wednesday 4 December, from 12.30, when Robert Bearman will this time be talking about the history of St Peter’s Chapel and the South Aisle.