Astrology at the winter solstice 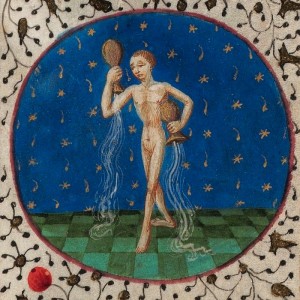 This weekend is the winter solstice, the turn of the year after which days begin to lengthen again (at least for those of us in the northern hemisphere). It’s a perfect time to enjoy a wonderful illuminated book now kept at Harvard University’s Houghton Library recently fully digitised for everybody to enjoy.

How it must have comforted its first owner in the 1470s with its glorious illustrations, particularly in the dark depths of winter. It was obviously created as a personal book of devotion, but it’s also a reminder of the colourful imagery that existed in churches in England before the Reformation. It’s one of those wonderful mixtures of the sacred and secular that could be seen until after Shakespeare’s lifetime.  As well as offering the comfort of religious images such as the story of the passion and the life of the virgin plus the text of divine services it also contains images of the signs of the zodiac and country tasks to be undertaken month by month. 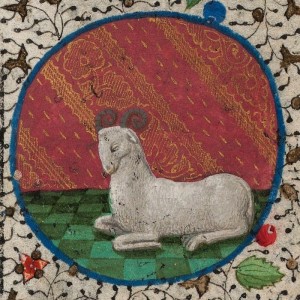 The book is known as the Heures de Notre Dame. It was created in France, probably Troyes. It has 237 pages, and is only a few inches high. The background to the pages include acanthus leaves, decorated initials and flowers and in addition to the signs of the zodiac and monthly occupations there are 29 additional miniatures. Every part of each page is gorgeously decorated. The text is written in Latin and French.

Shakespeare doesn’t seem to have had a lot of time for astrology. One of the most striking references to the subject comes in King Lear. “How long have you been a sectary astronomical?” asks Edgar, surprised that his brother unexpectedly appears to be taking predictions seriously. The audience know that it’s just a front, as Edmund has already confided his own views about the stars.
This is the excellent foppery of the world, that, when we are
sick in fortune, often the surfeit of our own behaviour, we make
guilty of our disasters the sun, the moon, and the stars; as if
we were villains on necessity; fools by heavenly compulsion;
knaves, thieves, and treachers by spherical predominance;
drunkards, liars, and adulterers by an enforced obedience of
planetary influence; and all that we are evil in by a divine
thrusting on. An admirable evasion of whore-master man, to lay
his goatish disposition to the charge of a star! My father
compounded with my mother under the dragon’s tail, and my
nativity was under Ursa Major, so that it follows I am rough and
lecherous. Fut! I should have been that I am had the
maidenliest star in the firmament twinkled on my bastardizing.

This link takes you to large reproductions of some of the astrological signs.

The illustrations that follow are the full pages as photographed by the Houghton Library so the layout of the book is shown. I hope you enjoy these wonderful images, created getting on for 650 years ago and still full of glowing life. Click on each one to see the images at larger sizes. 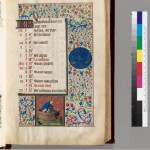 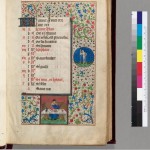 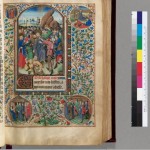 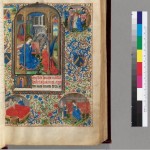 This entry was posted in Shakespeare's World and tagged astrology, astronomy, Book of Hours, Christmas, stars, zodiac. Bookmark the permalink.

2 Responses to Astrology at the winter solstice