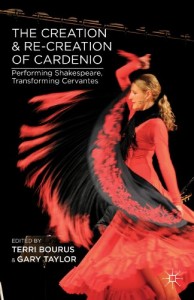 Palgrave Macmillan recently sent me a review copy of their new book The Creation and re-creation of Cardenio: Performing Shakespeare, Transforming Cervantes, edited by Terri Bourus and Gary Taylor. Cardenio is now universally known as “Shakespeare’s lost play” and although I knew something of the history of the play and had seen the RSC’s production in 2011, I’d never read or studied it.

The staging and publication of Double Falsehood, thought to be an adaptation of Cardenio, some 250 years ago didn’t convince critics of its authenticity, and it lay neglected for about 200 years. But in the past decade or so scholarly and theatrical interest in the play has increased, and it’s become the subject of sometimes heated debate. These are the bare facts:

20 May 1613: The Privy Council records show a payment of £20 to John Heminges of the King’s Men for court performances of six plays, including Cardenno.
9 July 1613: John Heminges was paid £6 13s 4d for the King’s Men to perform a play called Cardenna before the visiting ambassador of the Duke of Savoy.
That’s it from Shakespeare’s own lifetime: no mention of Shakespeare or any other author (though there’s nothing unusual about that).

9 September 1653: The Stationers’ Register lists several plays to be published by Humphrey Mosley including The History of Cardenio, by Mr Fletcher and Shakespeare.
This seems not to have been published, nor was the play published in any of the four Shakespeare folios or in Beaumont and Fletcher’s folio.

1727: Lewis Theobald, later to be a famous Shakespeare editor and already in dispute with poet and Shakespeare editor Alexander Pope, prepared for the stage a play entitled Double Falsehood, or the Distressed Lovers.
1728: this play was published, “written originally by W Shakespeare; and now revised and adapted to the stage by Mr Theobald” who included a preface explaining the origins of the play.

Theobald claimed to have based his edition on three manuscript copies of the play, one of which “is …in the handwriting of Mr Downes, the famous Old Prompter; and, as I am credibly inform’d, was early in the possession of the celebrated Mr Betterton”. Theobald never referred to it as Cardenio, and changed all the names (as was often done in post-Restoration adaptations), but it was known to be based on a story in Cervantes’ Don Quixote. In his preface to Double Falsehood Theobald promised to publish his own edition of Shakespeare’s plays which “may furnish occasion for speaking more at large concerning the present play”. But when this opportunity arose with his own carefully-edited version of Shakespeare’s plays in 1733, this play wasn’t included. Had he lost confidence in the play’s authenticity?

While most accept that there was a play called Cardenio in which Shakespeare had a hand, questions remain: did Theobald invent the whole thing? If he did use manuscripts, were they authentic (they have never been found)?  How much did he adapt the manuscripts? How much was there of Shakespeare, and how much Fletcher? And is Shakespeare’s hand to be found in any part of Double Falsehood? 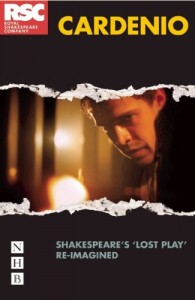 Modern editors, scholars and directors have had to grapple with these questions. The play has exerted a strong hold on a number of people including Brean Hammond, the editor of Double Falsehood for the Arden Shakespeare, Gregory Doran who recreated the play for the RSC, and Gary Taylor, the co-editor of the book which I mentioned at the start. This is actually the second book Professor Taylor has co-edited on the subject of Cardenio, and the book includes his “unadaptation” of the play. Most of the book, though, consists of scupulously researched essays by many contributors explaining the origins of the play, the role of Cervantes’ Don Quixote, the process of staging Taylor’s version, and the possibility that the play was deliberately “disappeared” because of its controversial treatment of ethnicity. The plot thickens.

The air of intrigue is increased by play’s story, rich in romance, disguise, betrayal, madness, forced marriage and seduction, set in the exotic location of Andalucia.

For me, though, the interesting thing about these books is the variety of texts now in existence. The Arden Shakespeare edition of Double Falsehood came first, making it accessible for the first time in 250 years. The play appears again in Bate and Rasmussen’s edition of William Shakespeare and Others: Collaborative Plays. And there are two versions of Cardenio, each of which has been staged. I’m used to editions of a Shakespeare play containing differences, but here we have the opportunity to see a number of reworkings of the same, unsatisfactory text. 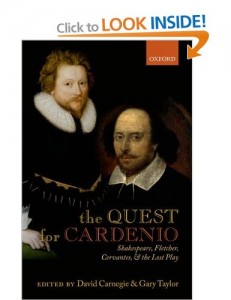 Gregory Doran’s “re-imagination”, performed by the RSC in 2011, is basically Theobald’s text with additions. As a theatre director with huge experience of staging Shakespeare and his contemporaries Doran perceived that Double Falsehood would not work onstage, and used the translation of Don Quixote used by Shakespeare and Fletcher to construct missing scenes. Taylor’s version is a “thought experiment”, an “unadaptation”. He asks “What would The History of Cardenio have looked like, before Theobald turned it into Double Falsehood?” In order to strip the layers back Taylor has imitated Shakespeare and Fletcher, using meticulous scholarship and his considerable experience of editing Shakespeare. His version has evolved from 1992 to 2012 and he sees it as a work in progress, calling for feedback and criticism from “the great variety of readers”. So if you want to know which you should read, the answer is both. 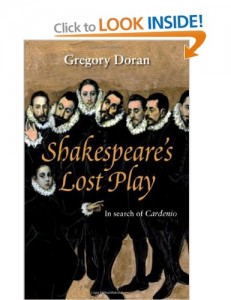 What though are the disagreements which I mentioned at the beginning?  The absence in Taylor’s book of almost any discussion of the RSC’s high-profile version of Cardenio
suggests a certain defensiveness, and Taylor’s review of the Bate and Rasmussen volume containing Double Falsehood is dismissive. Professor Tiffany Stern has struck a sceptical note about the whole issue: “It’s very unclear that there ever was a Shakespeare play called Cardenio“, she says, and there’s a recording of her discussion on the subject with Gregory Doran on the SBT’s Blogging Shakespeare.

Maybe one of those elusive manuscripts still survives somewhere, and will answer some of the questions. From 2010-2013 at least seven books, listed below, have tried to solve its mystery. There will surely be much more to say about Shakespeare’s “lost play”.

Chartier, Roger. Cardenio between Cervantes and Shakespeare: The Story of a Lost Play (Cambridge: Polity Press, 2013).

If you’re unable to get any of these, you might like to read Greg Doran’s blog that he wrote while directing his version of the play.