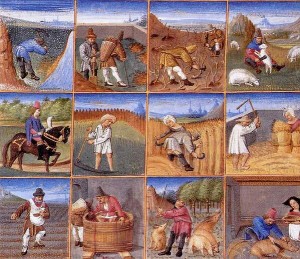 On a miserable January afternoon I spent some time looking through some of the beautiful medieval illuminated manuscripts now available online. Just before the new year I had received a tweet including this calendar, each month represented by work done on the land. The only information I had was that it was by Pietro Crescenzi. The picture itself is easy to find: it’s reproduced many times on websites. But none of them explained more about the images, or the copy of the book in which they appear.

The book is Ruralia Commoda, written in Latin toward the end of the author’s life. Pietro Crescenzi was born in Bologna, Italy in the 1230s, and educated at the University there. Following a career as a lawyer and judge he retired to his country estate where he wrote the book, a treatise on agriculture. The book is organised into twelve parts, explaining different kinds of farming and land management, the final chapter being a calendar of tasks appropriate to each month of the year.

It proved extremely popular. Elaborately-illustrated manuscript copies were made, and it was first printed in 1471. By 1500 there were already 13 editions in print, 6 in Latin, 3 in Italian, 2 in French and 2 in German. Many copies still exist in Libraries around the world, and there’s a lot of information about them online: pages from Harvard University and Reading University for instance, and images from the Pierpont Morgan Library copy are posted on Pinterest.

The British Library’s copy has a wonderful history, not quite Shakespearean, but quite close. Their manuscript copy, in French, was decorated for King Edward IV (1442-1483), the elder brother of Richard III. It’s thought to date from towards the end of his reign in the late 1470s.

One of the borders contains his royal coat of arms. The book was recorded as being in the Royal collection in Richmond Palace in 1535, remaining in Royal hands until it was given to the British Museum by George II in 1757.

So it’s a book that may have been known by all the Tudor and Stuart monarchs, and by some of the earlier kings that Shakespeare wrote about. Yet the subject of the book was farming, the illustrations, like the one shown here, of peasants going about their daily work. 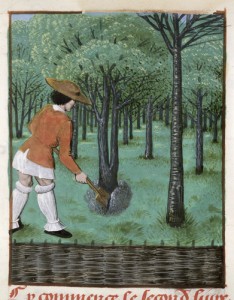 The seasons’ difference; as the icy fang
And churlish chiding of the winter’s wind,
Which when it bites and blows upon my body,
Even till I shrink with cold, I smile and say
‘This is no flattery; these are counsellors
That feelingly persuade me what I am.
And longed for the simple life where they,
exempt from public haunt,
Finds tongues in trees, books in the running brooks,
Sermons in stones, and good in everything.

Here’s the record for the manuscript with the illustrations following below.

None of these copies, though, seem to be the one containing the glorious images I started with, which seems to have avoided being written about. Here, though, are links to two pinboards, here and here  of images of medieval rural life that I found on Pinterest. Enjoy them!

This entry was posted in Legacy, Shakespeare's World and tagged As You Like it, Bologna, calendar, Pietro Crescenzi. Bookmark the permalink.