Staging the caskets: The Merchant of Venice

The programme from The Merchant of Venice, 1981

As a man of the theatre, Shakespeare must always have written his scenes with an idea of how they would be performed, though given the limited technical scope of theatres at the time he does sometimes seem to have made it puzzlingly difficult. How did he expect Antony to be lifted up to Cleopatra’s monument in Antony and Cleopatra, and how was the storm to be staged in The Tempest? Other moments seem simpler, but may still present a challenge. One such is the staging of the three casket scenes in The Merchant of Venice, set in Portia’s home in Belmont, where  suitors have to choose between metal caskets of gold, silver or lead in order to win Portia in marriage. The three scenes are not consecutive, but are separated by short scenes set in Venice. So the staging has to be simple to allow for the play to continue swiftly.

In the nineteenth century, where elaborate, realistic sets were required, set changes took so long that all these scenes were conflated and run together as a sequence.  But once the fashion for realistic scenery wore off, the original order of scenes was restored and they looked for solutions to allow quick scene-changes between the two locations. Miriam Gilbert’s excellent survey of RSC productions of the play in the Shakespeare at Stratford series comments on no fewer than thirteen stagings between 1947 and 1997. The simplest idea was probably John Barton’s in two productions at TOP in 1977 and RST in 1981 where three small boxes were simply placed on a wicker coffee table. This solution didn’t interfere with the action of the play, and the starkness of the caskets suited the idea that in Belmont the past has an unhealthy hold on the future. The black programme cover for this “comedy” in 1981, (reproduced above), featured Portia (Sinead Cusack) staring wanly out from behind the caskets. 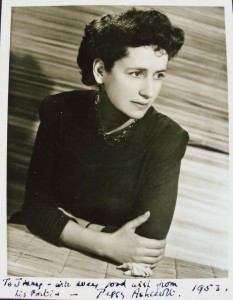 The 1953 Shakespeare Memorial Theatre season opened with The Merchant of Venice, directed by Denis Carey. Belmont was a light, elegant world contrasting with a darker Venice occupied by Shylock (Michael Redgrave). The mood carried through into the way the caskets were staged, each one held by a boy page who sat on a central oval bench. I recently received some photographs from my brother-in-law James Morris who lives in New South Wales, Australia, and who, aged twelve, was one of the casket boys. The pictures included a copy of the photograph Peggy Ashcroft, playing Portia, gave him, signed “To Jimmy – with every good wish from his Portia”, and a letter thanking him for the flowers he gave her on the press night of Antony and Cleopatra “I look forward to seeing you in Belmont tonight – a happier place than Egypt”.

Over Christmas we talked on the phone about his memories. Jim had held the lead casket – the one which contained Portia’s likeness. He remembered coming on upstage and walking down to the bench where they retrieved the caskets from a shelf out of view of the audience. The boys remained seated as the suitors approached, handing the caskets over. I had always assumed, because Jim was head chorister at Holy Trinity Church, that the boys sang “Tell me, where is fancy bred”, but Jim corrected me: their job was only to hold the caskets. He also mentioned that the boys had a fight onstage, a bit of business he obviously enjoyed. 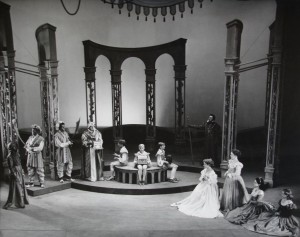 The Merchant of Venice, 1953. Includes John Bushelle as the Prince of Morocco, Anthony Adams, Robert Scroggins and James Morris as the pages, Peggy Ashrcoft as Portia, Marigold Charlesworth as Nerissa. Photographer Angus McBean

I headed for the Shakespeare Centre Library and Archive, where the RSC archives are kept, to examine the prompt book, reviews, photos and production records to see if I could find out more. What I found confirmed his recollections. The prompt book contains diagrams of the stage showing the three boys, and the production records include descriptions of their costumes, pale blue sleeveless jackets and trousers, shirts with lace-edged collars and grey shoes It’s clear that the boys helped to set the tone for the three scenes. At the start of the first, with the Prince of Morocco, they came on as part of a formal procession. Then in the second scene, with the Prince of Arragon, often played for comedy, they ran on, fighting, pushing each other off the central bench (described as the Snuff Box) until Nerissa brought them to order by clapping her hands. The fighting resumed at the end of the scene. At the end of the third scene, after Bassanio had successfully won Portia’s hand, the boys exited playfully “creeping in time with music”. Several critics commented on these scenes. The Guardian praised their handling and the Coventry Evening Telegraph said “the casket affairs go very well”, not surprising since they were thoughtfully integrated into the action. Only the Birmingham Mail found the pages, “young-eyed cherubims”, “merely a distraction”, and thought it was an example of “that striving for something different to the neglect of essentials”.

What, I wonder, would the Birmingham Mail critic have made of the ill-fated 1984 production. I doubt if anyone who saw it will have forgotten the way in which the caskets were staged. You could see it had been a great idea: the solution to the problem of getting the life-size caskets on and off the stage was to suspend them way above the stage throughout, lowered smoothly and elegantly onto the stage when required, and just as swiftly removed. But the brackets each one stood on were reminiscent of anglepoise lamps, and as the caskets were raised and lowered they wobbled violently. Whenever they moved they became the focus of the audience’s attention, provoking unwanted giggles. It was a great lesson in the advantages of keeping things simple: they must have longed for a neat little table or those three boys who some thirty years earlier had seemed a bit of a distraction.

There’s lots of information about the stage history of the play on the RSC’s website, including photographs of the casket scenes in many productions.

6 Responses to Staging the caskets: The Merchant of Venice