Cabinets of curiosity: Shakespeare’s the Thing 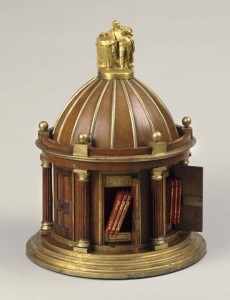 The wooden model of Garrick’s Temple to Shakespeare, at the Folger Shakespeare Library

The Folger Shakespeare Library in Washington, DC, has just opened a new exhibition to celebrate the 450th anniversary of Shakespeare’s birth. Called Shakespeare’s the Thing, the library is sharing “some of our favourite things” from their famous collections. Curated by head of reference Dr Georgianna Ziegler, the items have been selected by Folger staff. Beginning with four different versions of the Droeshout engraving of Shakespeare from folios, the exhibition goes on to show how William Shakespeare has touched every facet of our culture.

The items on display are indeed a wonderful mixture of objects, books and pictures: one of William Henry Ireland’s forged documents, a tea caddy with a portrait of Shakespeare, a wooden model of Garrick’s Temple to Shakespeare, stage versions and costume designs, coming up to date with the video of 10 Things I Hate About You and The Play’s the Thing board game.

It’s not as random as it may sound: the exhibition’s organised by subject, with two cases of translations and another of Shakespeare portraits. It’s a great opportunity to take what they’re calling “a broad look at the bard”, and will be on until 15 June.

None of the items are quite as wacky as the locks of “the hair of the head of Shakespeare’s  when 16, and the year of his death”, which are located in the Shakespeare Birthplace Trust’s collections, a hang-over, surely, from the period when spurious artefacts were displayed in the Birthplace. They too have their place in the story of Shakespeare’s growing popularity, and the almost-religious hunger for relics.

The idea that items are displayed for their interest value rather than because they fit in with the theme of a carefully-curated exhibition reminds me of the idea of the cabinet of curiosity that flourished in the seventeenth and eighteenth centuries, the fore-runners of museum collections. There is currently much interest in the idea of cabinets of curiosities, as explained in this recent Guardian article. In many of the installations curators respond to existing works of art, for instance at the Prado museum in Madrid “a dolphin skeleton now hangs from the dome of the museum’s sculpture court, casting its looming shadow over a massive marble Venus and her dolphin. ‘It’s jumping like a leviathan …as it prepares to swallow the goddess.’ ” 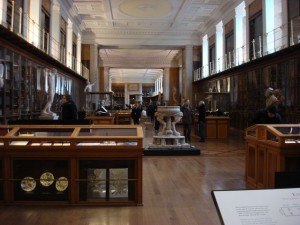 The Enlightenment Gallery at the British Museum

One of my favourite places is the permanent exhibition in the British Museum, Enlightenment: Discovering the World in the Eighteenth Century. The museum was founded in 1753 and to quote Neil MacGregor in his introduction to the book of the exhibition “it seeks …to examine the way people of the time looked at the natural and artificial curiosities being collected from all over the world by scholars and collectors, who then sought to make sense of their past and their present”. What I found exciting about the exhibition was that it conveys the sense that early collectors were trying to understand not just the objects but how they related to each other within the context of different cultures. The difficult issues of description and classification were being developed in all fields of knowledge. In the exhibition objects are presented in a different way from the rest of the museum and the feeling of the cabinet of curiosity is deliberately invoked. 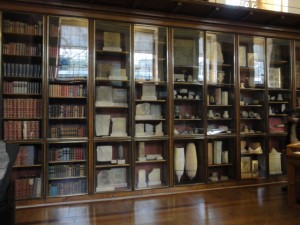 In those cabinets of curiosity specimens of all kinds would be displayed together: mostly natural history, but also man-made objects like coins, illustrations  and books. In his chapter, Robert Huxley quotes a 1638 account of the collection owned by the great plantsmen the Tradescants. One cabinet contained “a piece of wood, an ape’s head, a cheese etc., all kinds of shells, the hand of a mermaid, the hand of a mummy, a very natural wax hand under glass, all kinds of precious stones, coins, a picture wrought in feathers, a small piece of wood from the cross of Christ”.

These original cabinets of curiosities were a result of the urge to collect, almost randomly, and this description is a reminder that there was little distinction between art and science in the early modern period.

Does the new trend signal a change in what we want to get from visiting a museum? Rather less of the comprehensive, glossy exhibition in subtly-lit air-conditioned halls, and rather more of the quirky, individual collection resulting from a genuine fascination with the items, or a wish to find out? How much further could the idea of telling the story of Shakespeare’s growing and global cultural impact be developed beyond the Folger’s current exhibition?

2 Responses to Cabinets of curiosity: Shakespeare’s the Thing