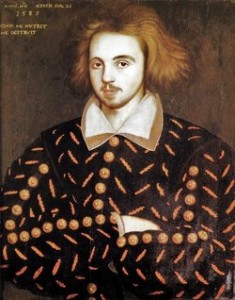 Earlier this week the 450th anniversary of Christopher Marlowe’s birth passed without a lot of media interest. Yet events to celebrate Shakespeare’s 450th are already getting a lot of attention. Although Marlowe is still highly-regarded, and his plays are performed and have been filmed, his reputation doesn’t come close to that of Shakespeare. But as Stanley Wells points out in his book Shakespeare & Co, “Though the dates and sequence of Shakespeare’s early plays are problematic, it seems certain that if Shakespeare had died when Marlowe did, we should now regard Marlowe as the greater writer”.

Marlowe was born in Canterbury, and baptised on 26 February 1564 two months before Shakespeare. Both came from similar backgrounds, Marlowe the son of a shoemaker, Shakespeare the son of a glover. Marlowe attended the King’s School in Canterbury, a school at which he won a scholarship to attend Corpus Christi College, Cambridge, where he was expected to be prepared for Holy Orders.

Most of what we know about Marlowe comes from his rather frequent brushes with authority. His spying activities are inferred when in 1587 the Privy Council wrote to the administrators of Cambridge University to explain his absences, saying he had “done her Majesty good service…in matters touching the benefit of his country”.

After leaving Cambridge he moved to London where in 1589 he was arrested for murder having been involved in a street fight, but was later found to have been acting in self-defence. In 1592 he was deported from the Netherlands on charges of counterfeiting coins. Later that year he allegedly assaulted two constables in Shoreditch, and in Canterbury he was accused of damaging property though the charge was dropped. In May 1593 a series of events culminated in Marlowe’s death in Deptford, a shady business for which the coroner’s report was found only in 1925.

In between all this, Marlowe wrote the plays and poems for which he is remembered, including Hero and Leander, Tamburlaine the Great (2 parts), Dr Faustus, Edward II and The Jew of Malta. Incidentally only one example of Marlowe’s writing exists: a signature on a will which he witnessed, spelled “Marley”.

Shakespeare refers to Marlowe in As You Like It, with the quotation from Hero and Leander “Who ever loved, that loved not at first sight”, and a mention of the “dead shepherd”. Among other examples, the Player’s speech in Hamlet seems to refer to Marlowe’s play Dido, Queen of Carthage. Some of Marlowe’s dramatic poetry is extremely striking and deservedly famous: here is the speech describing Helen in Dr Faustus: 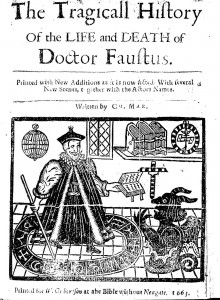 Title page of a late quarto of Dr Faustus, 1663

Was this the face that launch’d a thousand ships,
And burnt the topless towers of Ilium?
Sweet Helen, make me immortal with a kiss.
Her lips suck forth my soul: see where it flies!
Come, Helen, come, give me my soul again.
Here will I dwell, for heaven is in these lips,
And all is dross that is not Helena.
I will be Paris, and for love of thee,
Instead of Troy, shall Wittenberg be sack’d;
And I will combat with weak Menelaus,
And wear thy colours on my plumed crest;
Yea, I will wound Achilles in the heel,
And then return to Helen for a kiss.
O, thou art fairer than the evening air
Clad in the beauty of a thousand stars;
Brighter art thou than flaming Jupiter
When he appear’d to hapless Semele;
More lovely than the monarch of the sky
In wanton Arethusa’s azur’d arms;
And none but thou shalt be my paramour!

Marlowe was writing for the Admiral’s Men, and their leading actor Edward Alleyn. His heroes are men of dangerous ambition: Tamburlaine the conqueror, Faustus who sells his soul to the devil in return for unlimited knowledge. The Jew of Malta is a play that seems to set out to offend everybody: Jews, Turks, and Christians (monks and nuns). The plays were spectacularly successful, full of horrors and seemingly unstageable events.

So how is Marlowe’s 450th being celebrated? The Marlowe Society at Cambridge University is one of the most distinguished student acting groups in the country, founded in 1907 and during the year all of his plays are to be acted in Cambridge.

Events are also taking place in London and Canterbury. The Marlowe Society’s website includes a great deal of information:
The Marlowe Society together with the Marlowe Theatre, Fourth Monkey Theatre Company, and University of Kent have organised a series of events in Canterbury to mark the anniversary. The Fourth Monkey Theatre Company is to present three of Marlowe’s plays in March, and a number of eminent speakers will each give a lecture associated with one of the productions at different historic venues in the city. 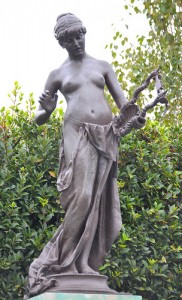 The Marlowe Memorial in Canterbury

From 31 May-1 June there will be a special weekend held by the Alliance of Literary Societies to coincide with the anniversary of Marlowe’s death. It’s being held at the schoolroom of the King’s School, Canterbury, and will include wreath-laying at the Marlowe Memorial. I didn’t know until just now that there was a Marlowe Memorial. Dating from 1891 the statue shows the semi-naked figure of the muse of poetry. It’s a charming piece of work, but hardly seems to match up with the Marlowe we now remember for his homosexuality, violence and atheism.

Away from Canterbury itself there are a variety of events. On 13 March there’s a free lecture entitled Dire Goings-on in Deptford at the Guildhall Library in London, and on 18 March a one-day symposium at the University of Kent on the subject Marlowe in Performance: Then and Now. A fitting year of celebrations after all.