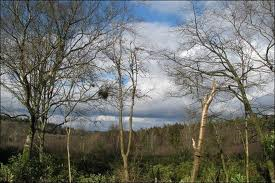 At the end of the week we can officially start looking forward to spring, with St Valentine’s Day on the 14th February. One of our regular readers at the Shakespeare Centre Library some years ago was a retired gentleman who would always remind us that we should really be celebrating the beginning of spring on St Bride’s Day, which he told us was the 13 February. St Bride, he said, was so pure that she could hang her cloak upon a rainbow, an image that I like because it blends the reality of the February weather with the idea of hope for the year to come. Before anyone tells me I’ve got this wrong, I’ve spent some time checking and have found that St Bride, more commonly known as St Brigid, is usually celebrated on 1 February, or possibly 2 February or even 14 February, before finding on this website that that the 13th is another possibility.  Nothing, it seems, is quite as simple as it appears. 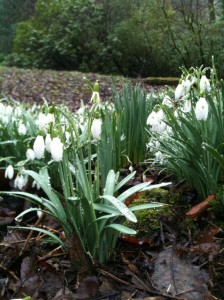 St Bride’s Day is, however, always in February, the shortest and probably most unpopular month of the year, with several weeks still to go before life really begins to return to the land. This year the UK has suffered the wettest winter in about 250 years, and thoughts of spring are particularly welcome. Snowdrops and celandines are already in flower and the buds of daffodils are getting ready to open. But not quite yet.

Though he mentions St Valentine’s, a day then as now for lovers, Shakespeare names February only once, at the end of Much Ado About Nothing, where Benedick is described as having “such a February face,/So full of frost, of storm and cloudiness”.  Perhaps he too wanted to forget about this dismal time of year.  But other artists have found some positives even in this month. Pietro Aretino, an Italian poet born in 1492 wrote of February “Let us love winter, for it is the spring of genius”. 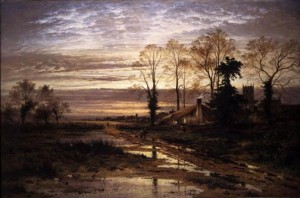 The saying “February fill dike, Be it black or be it white; But if it be white, It’s the better to like” is an old one. Thomas Tusser in 1557 writes something very similar.  In the visual arts, Benjamin Williams Leader’s 1881 landscape painting February Fill-Dyke is one of my favourites. As a child I was fascinated by it, hanging at the top of the stairs at the entrance to the Birmingham Museum and Art Gallery. One the one hand it’s a desolate, sodden scene, but Leader also finds beauty, particularly in the late afternoon sky reflected in the muddy puddles and ruts. Smoke rises from the chimney of the little cottage, promising warmth even in the dingiest of days. Beneath the soil spring is waiting, rebirth is about to begin.

There are certainly plenty of Shakespeare-related  events getting under way this week, and all of them are free. First of all, there’s a one-off event happening on Wednesday 12 February from 6.30-8.30  when the British Council in London are hosting a lecture entitled Speaking the bright and beautiful English of Shakespeare with Ben Crystal. Even if you can’t get to it, you can still join in because there’s to be a live webcast. You can sign up for either here.

Also beginning on Wednesday is a series of lectures from the Kingston Shakespeare Seminar Spring 2014 on the subject of Shakespeare and Law. The lecture this week will be Martin McQuillan talking on Marx, Derrida, Shakespeare, and there are further lectures on 27 February,  13 March, 20 March, 10 April, 1 May and 8 May. During the series plays to be discussed will include King Lear, Romeo and Juliet, Henry IV and The Merchant of Venice. All lectures are free and will be held at the Rose Theatre in Kingston-on-Thames. More information here.

Finally, The Victoria and Albert Museum in London opened a new exhibition on 8 February in their Theatre and Performance Galleries that will run until 28 September. Entitled Shakespeare: Greatest Living Playwright, it is celebrating the 450th anniversary of Shakespeare’s birth, and examines “the enduring influence and popularity of the world’s most famous playwright”.  Quoting from the website,
Drawing together objects from the V&A collection and interviews with key contemporary practitioners, Shakespeare: Greatest Living Playwright examines how Shakespeare’s plays have travelled across centuries and continents to be used as a springboard for theatrical re-imaginings and interpretation. Dealing in universal truths, but offering generations of practitioners the creative freedom to explore new ideas, his works remain contemporary and relevant today.  And here’s a report on it. 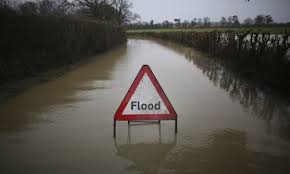 Plenty here, then, to keep Shakespeare-lovers going until Shakespeare’s favourite season, spring, begins in earnest and, we hope, the February floods begin to recede.