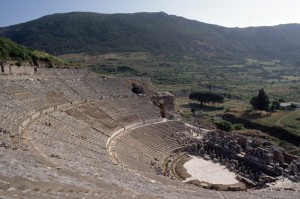 The Theatre in Ephesus

Dr Michael Scott’s BBC4 series Ancient Greece: the Greatest Show on Earth, looking at theatre in the classical world, has reached the Roman period. This is only available to download until 27 February, though you will then have a few weeks to watch it.  I recommend you do so.

The series isn’t just about the history of Greek theatre. Instead Scott shows how theatre expresses the beliefs and values of the civilisation in which it occurs. In this episode he shows what happened to Mediterranean culture once the Romans began to dominate it. He does this through examining the buildings, the plays written for them and the actors who performed in them. His analysis can easily be extended to include the situation in Shakespeare’s England many centuries later.

With glorious shots of Greek theatres he made the point that these were spaces easy to access from all sides, built to have perfect acoustics, to be both inclusive and part of the landscape. Democracy and theatre evolved at the same time, and the two were intertwined. The huge auditoria were designed to hold large audiences attending festivals, and the plays written discussed important political issues on the relationship of the individual to the state, often criticising public figures. 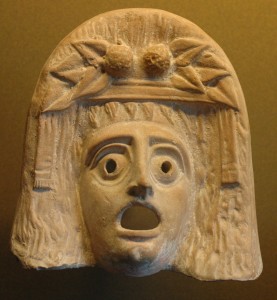 Moving to the Roman period it was possible to see how the physical theatres indicated a change in ideas of government. Although they wanted the prestige and cultural achievements of the Greeks, the Romans began to control their audiences by the use of temporary theatres which could be easily closed. Acting, rather than being a high-status occupation, became low status. When Pompey built his theatre in Rome in 55BC it was the largest building in the city. Later theatres, such as the one built by the Emperor Augustus, were completely enclosed, with lots of entrances that could be controlled. High-status individuals were allocated the best seats while the lower classes sat furthest from the stage. Instead of discussing political ideas, new kinds of entertainments were devised built around mime, music and dance.

He pointed out, thought, that the Roman influence on theatre was not entirely negative. It was in the Library built by the Roman Emperor Hadrian that many of the plays of the Greek and Roman theatre were preserved. 2,500 years after some of them were written, the plays still have an emotional impact on us. We still celebrate the achievements of Greek and Roman culture, and appreciate how important theatre can be in promoting democracy.

How does this relate to Shakespeare’s theatre? A week or so ago Dr Andy Kesson from the University of Roehampton gave a lecture at the Shakespeare Institute. He is currently working on a project called “Before Shakespeare”, looking at theatres in London before 1576 when The Theatre, the first “permanent” theatre was built. He questioned this idea of permanence, since playhouses were poorly built, prone to fall down, and noted that several “permanent” theatres were only used for a short time. In London, unlike ancient Greece or Rome, playhouses were not officially sanctioned and had to be put up outside the city walls, though the companies themselves were invited to perform privately in a number of venues, even before royalty. Plays were potentially subversive and had to be approved before they could be performed: not much sign here of the freedom allowed in ancient Greece, but neither were the actors restricted to the bland propaganda that developed in Rome. Maybe the London authorities realised that theatre was a valuable safety valve where political issues could be discussed as long as they were not too obviously related to current events. Hence the need for Shakespeare’s plays to be set in either a historical period or a distant place.

In the last few days Laura Nicklin has reported on a lecture by Professor Jonathan Neelands from the University of Warwick on the new BSA Education Network blog. His subject was Shakespeare, Theatre and Democracy: Towards a Playful Future.

I’d encourage you to read the whole post. Neelands agreed with many of the points raised in Scott’s TV programme about the importance of theatre to democracy in its encouragement of engagement.  He took it further, though, suggesting that theatre can have an important role in education, as he had observed “children aged six years old and thirteen years old …engage in playing games and functioning as though they were a miniature society. This highlighted children’s ability through play to develop through their own imaginative creations democratic systems.”   And ” the ability of theatre to enable and develop these specific skills cannot be overlooked, nor should it in preparing and equipping children for their participation in a truly democratic future”.

Today theatre in the UK is seen as a peripheral activity, but all three of these presenters share the belief that in a democracy theatre can have an important role in promoting discussion and sharing political and social ideas.