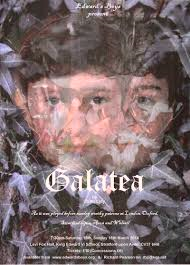 Galatea is the first full play by Lyly that Edward’s Boys, the schoolboy troupe from King Edward VI School in Stratford, have performed, and I’d guess that it won’t be the last.

Nowadays Lyly is largely remembered as one of the prime influences on Shakespeare, particularly in his early comedies. I’d never seen a play by Lyly before, and was expecting to hear speeches full of the formal verbal flourishes used by Shakespeare in Love’s Labour’s Lost, but the style of Galatea is direct, witty and energetic. It was a bit of a revelation.

Lyly’s play was written in the late 1580s and was performed before Elizabeth 1 on New Year’s Day, probably in 1588.  In her programme note Dr Farah Karim-Cooper of Shakespeare’s Globe remarks “Their performances attracted members of elite society, the wealthy patrons in their finery who expected to see beautiful costumes and to hear melodious songs, fine music and the well-tuned voices of the boy actors”. It was the adult performers who were disreputable. The homoerotic overtones of last year’s production of Marlowe’s Dido, Queen of Carthage made for uneasy viewing, but this, with several of the same boys playing leading roles, has a very different feel.

Here there’s a real sense of freshness and enjoyment from the whole ensemble, and I would rather not single out individual performers. As usual with Edward’s Boys, there’s much physical inventiveness, as in the group of boys who metamorphose into the tree beneath which action takes place. Most of the strongest characters in the play are female, and putting teenage boys into women’s clothes wouldn’t seem to be the most obvious way of getting them to enjoy themselves. Struan Leslie is the Movement Director for the play, and comments “A crucial fact about being a member of Edward’s Boys: at some point you will play a girl”. 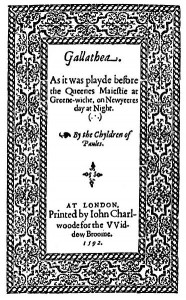 Leslie finds that in fact the boys relish it: “Boys bring to these plays an openness that is more fluid and unfettered than an adult company when men are portraying women…You never know where you are with boys”. I was surprised how much space there is within the play for individual interpretation, and how many of the boys grasp the opportunity. As well as the sweetly sincere heroines Galatea and Phyllida, girls who are dressed as boys by their fathers in order to avoid being sacrificed to Neptune, female roles include the deliciously haughty Diana, eyes flashing wildly on every appearance, followed by her gaggle of nymphs, and Venus, goddess of love.

Other roles are played with just as much gusto, such as the trio of north-country brothers (I still don’t know why the action takes place in Lincolnshire), who every now and then appear with a cheerful blend of good humour and song. The trident-bearing Neptune huffs and puffs, threatening dire consequences if the most beautiful virgin doesn’t get offered up to the sea-monster Agar. Cupid, possibly having the most fun of any of the performers, is first revealed as other actors melt away, in his characteristic pose balanced on one foot, bow drawn. On every possible occasion he cheekily mocks the pomposity of the goddess Diana.

With Diana an unmistakeable parallel to Elizabeth 1, would the queen have laughed at herself, played by a boy, in that performance at court? It seems likely that she would. There are many laugh out loud moments in the play, which builds up to the big dramatic scene in which the third-prettiest girl is offered up to Neptune. This difficult scene contains a long, heartfelt speech by the girl who accepts the necessity of her sacrifice only to find herself rejected because she isn’t beautiful enough. It’s a beautifully-written speech, moving between tragedy and comedy, containing long, static silences which the actor performed admirably. Eion Price’s blog post about the production focuses in particular on this scene, and the whole play has been reviewed on The Bardathon. 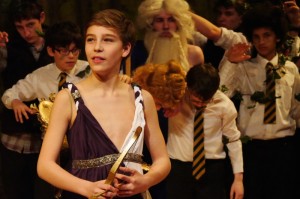 A scene from Galatea by Edward’s Boys

The play does, then, have serious moments, and always there in the background is a question that would have resonated with Queen Elizabeth and her court: Can it ever be right for an individual to put their desires above the good of society as a whole?

Edward’s Boys are the ordinary pupils of a grammar school in a small Warwickshire town, not the highly-trained choristers for which the play was written. To emphasize this fact a number of boys appear in school uniform. But this company, led by Perry Mills, is doing something very unusual by performing plays written for boys, by boys. Their obvious exuberance, a quality Lyly must have wanted to bring to the fore, makes the performance a delight. The company’s reputation has been steadily building and on Sunday evening the audience included a clutch of Shakespeare academics and educators.

It’s a triumph for Edward’s boys, but also for John Lyly, proving that his plays deserve to be performed in their own right rather than just as footnotes to Shakespeare. Galatea still has two performances to go, in April, one at the Playbox Theatre in Warwick and one at the new Sam Wanamaker Theatre at Shakespeare’s Globe as part of the study day John Lyly and the Children’s Companies’ Repertoire on 27 April. If you don’t have your ticket yet, get one – it’s not to be missed.