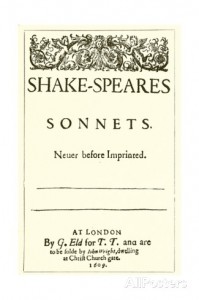 I’ve only occasionally written in this blog about Shakespeare’s Sonnets, and then mostly about possible biographical references in them, for instance to Anne Hathaway or to the death of his son Hamnet. These are hard to avoid: for hundreds of years now people have attempted to make a coherent story from the sequence of poems that received their unauthorised publication in 1609. Was there really a Dark Lady and a Fair Youth who were involved in a triangular relationship including Shakespeare? Hundreds of books must have been written trying to establish their identity. Then there is the intriguing nature of the publication itself. Was it authorized by Shakespeare? (It’s assumed not). What role was taken by Thomas Thorp (named as TT on the title page)? And who is the “onlie begetter”, Mr W H?

The title page of the 1640 edition of the sonnets

Questions abounded, and weren’t helped by subsequent publication history. The second, 1640 edition of the sonnets omitted some, re-ordered them, sometimes combining two sonnets into one, made them more acceptably by occasionally making “he”, “she”, and giving them titles such as “The glory of beauty”. There’s an examination of the Folger Shakespeare Library’s copies of this edition here.

No critical edition of the sonnets was available until Malone’s was published in 1780, so many readers encountered these poems only in the 1640 format. It was in the Romantic period that the idea of the sonnets being autobiographical took hold, Wordsworth famously claiming “with this same key Shakespeare unlocked his heart.”  Opinions varied. Nicholaus Delius, in the middle of the nineteenth century, called them “the free outcome of a poetic imagination,”  and William Minto, some years later, regarded many as “exercises of skill, undertaken in a spirit of wanton defiance and derision of the commonplace.” 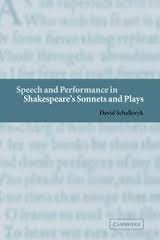 Earlier this week Professor David Schalkwyk gave a lecture to the Stratford Shakespeare Club on the subject of the sonnets. He insists of looking at them as poetry rather than concealed autobiography. He has written many times about the sonnets, including his 2002 book Speech and Performance in Shakespeare’s Sonnets and Plays, Shakespeare, Love and Service, published in 2008 and 2013’s book The conceptual investigations of Shakespeare’s sonnets.

Professor Schalkwyk began by asking who is the “I” in the sonnets? Whose voice are we hearing, and who is “you” or “thou”?  These personal pronouns are non-specific and can be appropriated by anyone. Shakespeare assumes the persona of the poet, who in his turn plays, as he was to say elsewhere, “many parts”. There’s always someone else there, and the situation for virtually all the sonnets is a discussion or argument. The relationship between these people varies, from the authoritarianism of parent and child, master and servant, or the equality of friends, the uncertainty of lovers.

In his book The Genius of Shakespeare Jonathan Bate suggests the poems are persuasive because of what they leave out. “Since the poems imply a plot without actually spelling it out, there is room for readers to step in with their version of affairs. As the plays leave interpretive space for the audience …so the sonnets drop hints to draw the reader into their implied narrative”.

Both Bate and Schalkwyk made this connection between Shakespeare as writer of plays and the ways in which the sonnets work. He gives us the emotion of a siutation, and we are free to imagine an infinite number of appropriate scenarios. As Bate puts it, “This, then, is the genius of the sonnets: their power to generate readings”.

David Schalkwyk took as a powerful example sonnet 116, the sonnet frequently read at weddings. I’ve always felt uneasy at this, because the first four lines are awkwardly phrased, full of unsettling negatives. He suggested that rather than a confirmation of perfect love, it can be read as part of a lovers’ row, where one partner is threatening to leave a relationship and the other is determined to win the argument. His angry delivery was very persuasive. In his opinion, it’s definitely not suitable for a marriage. Here it is:
Let me not to the marriage of true minds
Admit impediments. Love is not love
Which alters when it alteration finds,
Or bends with the remover to remove:
O no; it is an ever-fixed mark,
That looks on tempests, and is never shaken;
It is the star to every wandering bark,
Whose worth’s unknown, although his height be taken.
Love’s not Time’s fool, though rosy lips and cheeks
Within his bending sickle’s compass come;
Love alters not with his brief hours and weeks,
But bears it out even to the edge of doom.
If this be error and upon me proved,
I never writ, nor no man ever loved.

The mystery of the sonnets remains. It isn’t even known when they were written, though the high point for sonnet sequences was the 1590s when Philip Sidney’s posthumously published Astrophel and Stella was followed by sonnets written by others including Fulke Greville and Edmund Spenser. Professor Schalkwyk has found that of the 154 Shakespeare’s sonnets, only 26 are collected into modern verse anthologies. This may be only 15% of them, but it’s considerably more than we remember of any of the others, and they’re remembered for their excellence as poems, not for what they might or might not reveal about Shakespeare’s life.