Taking Hamlet around the Globe 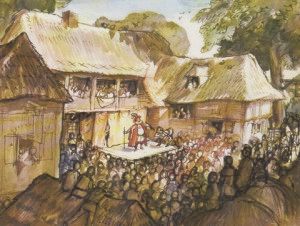 C Walter Hodges’ painting of actors outside a country inn

Touring has been an essential part of acting life for centuries: Shakespeare is thought to have seen his first plays as a child when a professional touring group came to Stratford-upon-Avon, and we assume he was one of the actors who regularly went on tour when he was working in London. The work of the Records of Early English Drama project has since the 1970s been painstakingly unearthing information about performances around the country, and a fuller picture is gradually emerging.

Actors have gone on touring with Shakespeare’s plays ever since. All the great names went on tour, including The Kemble family, Edmund Kean and Henry Irving. The Bensons, as well as performing in Stratford, toured almost obsessively, at times having two touring companies operating simultaneously, and in 1913-14 they embarked on an exhausting tour of the US and Canada that took up almost a year in all. British actors also went as far as Australia. 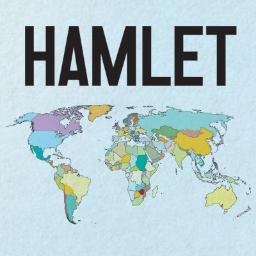 The live video relays of productions might be thought to have reduced the need for companies to tour: why go through all the trouble of travelling, when it can be transmitted to a cinema? But Dominic Dromgoole says “Touring is in our blood”, and his Globe to Globe project will be going to the other extreme, taking one production, a fresh production of Hamlet, on a two-year tour that will take in every country in the world, beginning on April 23 2014.  He describes it as “a completely unprecedented theatrical adventure”. Here’s the link to the map.

This week the production has been in the news with the announcement of the cast list and more information about how it will work: twelve actors will share roles over the two years, with two actors playing Hamlet. Eight of the twelve will perform at a time, giving actors a chance for breaks and allowing for indispositions. Otherwise it would be an awful long time for anyone to put their life on hold.

The project has its own website with more details:
The small company of actors will travel to all nations in the world to stage Hamlet in a huge range of unique and atmospheric venues, from town squares to national theatres. They will travel by boat, train, car and aeroplane, planning their routes across the seven continents to minimise the tour’s carbon footprint as much as possible.

Hamlet is a great choice: not only is it Shakespeare’s most celebrated play, but there is a record of it being performed in 1608 by the crew of a ship of the East India Company off the coast of Yemen. This performance happened only a few years after the play was written, in 1608, an amazing record that tells us much about how widely Shakespeare’s play was known.

Many modern companies such as Cheek by Jowl and Propeller have made their names as touring companies, and in 2006 the National Theatre of Scotland was founded, as a national company without a permanent theatre.

Internationally renowned director Peter Brook who has worked in Paris and on tour for over thirty years, was asked his opinion of the tour:
The six simplest words in the English language are to be or not to be. There is hardly a corner of the planet where these words have not been translated. Even in English, those who can’t speak the language will at once recognise the sound and exclaim ‘Shakespeare!’ Hamlet is the most all encompassing of Shakespeare’s plays. Everyone, young or old can today find an immediate identification with its characters, their pains and their interrogations. To take Hamlet in its original language around the world is a bold and dynamic project. It can bring a rich journey of discovery to new audiences everywhere. 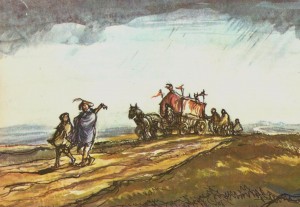 C Walter Hodges’ painting of actors on the road

Dominic Dromgoole has described the performers of the Globe to Globe Hamlet as “a squad of brilliant actors and intrepid adventurers”. Here is the list: Keith Bartlett, John Dougall, Ladi Emeruwa, Phoebe Fildes, Miranda Foster, Naeem Hayat, Beruce Khan,   Tom Lawrence, Jennifer Leong, Pawiri Paratent, Matthew Romain, Amanda Wilkin. You can find out more about them on the website. A couple of names jump out at me: both John Dougall and Keith Bartlett have performed extensively with the RSC in the past and both have taken part in the Company’s tours.

In As You Like It, Rosalind blames the experience gained in travel for Jaques’ melancholy: “I had rather have a fool to make me merry than experience to make me sad – and to travel for it too”. Nowadays we expect travel to bring us positive experiences, and at the end of their two years of touring the Globe to Globe actors should have much to celebrate.

2 Responses to Taking Hamlet around the Globe