Thomas Wyatt, Hilary Mantel, and the art of poetry 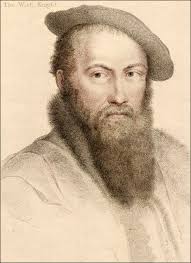 Hilary Mantel’s novel Bring Up the Bodies documents the life of Thomas Cromwell, Henry VIII’s chief minister. History has judged Cromwell harshly for ruthlessly masterminding the downfall of Anne Boleyn, but without backing away from this, she makes him a sympathetic and even sensitive man. One of the ways she does this is through Thomas Wyatt, a diplomat and poet who had been associated with Anne Boleyn, but escaped execution largely because Cromwell liked and admired him.

On pages 412-414 of the book, Mantel writes persuasively about the connection between the skills of the politician, the diplomat and the poet. Cromwell is in conversation with Call-Me-Risley (Wriothesley) about Wyatt.
He leaves us all behind. He writes himself and then he disclaims himself. He jots a verse on some scrap of paper, and slips it to you, when you are at supper or praying in the chapel. Then she slides a paper to some other person, and it is the same verse, but a word is different. Then that person says to you, did you see what Wyatt wrote? You say yes, but you are talking of different things. Another time you trap him and say, Wyatt, did you really do what you describe in this verse? He smiles and tells you, it is the story of some imaginary gentleman, no one we know; or he will say, this is not my story I write, it is yours, though you do not know it. He will say, this woman I describe here, the brunette, she is really a woman with fair hair, in disguise. He will declare you must believe everything and nothing of what you read. You point to the page, you tax him: what about this line, is this true? He says, it is a poet’s truth. Besides, he claims, I am not free to write as I like. It is not the king, but metre that constrains me. And I would be plainer, he says, if I could: but I must keep to the rhyme”.
“Someone should take his verses to the printer”, Wriothesley says. “That would fix them”.
“He would not consent to that. They are private communications”.
“If I were Wyatt”, Call-Me says, “I would have made sure no one misconstrued me. I would have stayed away from Caesar’s wife”.
“That is the wise course”. He smiles. “But it is not for him. It is for people like you and me”. 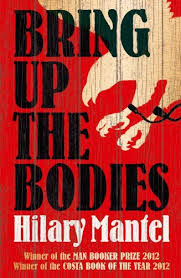 Mantel continues, describing the poet’s skill, and Cromwell’s dream-like memories:
When Wyatt writes, his lines fledge feathers, and unfolding this plumage they dive below their meaning and skim above it. They tell us that the rules of power and the rules of war are the same, the art is to deceive, and you will deceive, and be deceived in your turn, whether you are an ambassador or a suitor. Now, if a man’s subject is deception, you are deceived if you thing you grasp his meaning. You close your hand as it flies away. A statute is written to entrap meaning, a poem to escape it. A quill, sharpened, can stir and rustle like the pinions of angels. Angels are messengers. They are creatures with a mind and a will. We do not know for a fact that their plumage is like the plumage of falcons, crows, peacocks. They hardly visit men nowadays. Though in Rome he knew a man, a turn-spit in the papal kitchens, who had come face to face with an angel in a passage dripping with chill, in a sunken store room of the Vatican where cardinals never tread; and people bought him drinks to make him talk about it. He said the angel’s substance was heavy and smooth as marble, its expression distant and pitiless; its wings were carved from glass.

Reading this section before the RSC’s day-long event Cromwell’s Court, my husband pushed the novel over to me – do you think she’s writing about Shakespeare?  At the event Wyatt was much discussed, and the section is about him. But Mantel’s description of the creative process, of the need for the poet to conceal himself, surely relates to any writer (including herself). It certainly can be seen to relate to Shakespeare, the writer who more than any other, seems to disappear into his plays and poems.

Here is Wyatt’s subtly crafted poem that is often taken to refer to Anne Boleyn, and which Mantel references in that mention of Caesar’s wife. Here is an article about it from the Guardian. and here’s the poem itself:

Wyatt’s considerable diplomatic skills meant he escaped execution though he spent time in the Tower of London twice. Most of his poems were on the subject of love, but only a few were published during his lifetime and it’s only in the last hundred years or so that he has been recognised as a major poet. He is often called, with Surrey, “the father of the English sonnet”. Shakespeare knew his sonnets: many of them were published in the 1557 collection Tottel’s Miscellany. He died in 1542 aged only 39. There is much information about him, including many of his poems, on the Luminarium site.