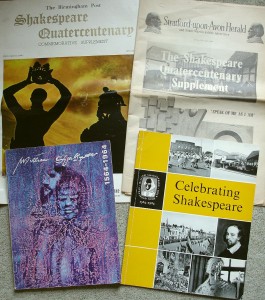 Some souvenirs of the 1964 celebrations

So how do you celebrate Shakespeare’s 450th birthday? The RSC are holding a fireworks display and on Saturday a day of events. The town is expecting bumper crowds on Saturday for its special parade, and for the first time in several years the traditional lunch for 500 people (all tickets were sold within days) is being held in a marquee on a lawn between the theatre and the church.

Back in 1964, for the Quatercentenary, celebrations were massive. Stratford was becoming ever more popular as more people had cars, and international travel was becoming the norm. The plays were screened on TV and in Stratford the RSC was drawing in younger audiences. In his book Celebrating Shakespeare Levi Fox listed the many elements that combined in this great celebration: “a major Shakespeare exhibition, outstanding musical contributions, poetry recitals, films, lectures, an international conference of scholars with folk dance and other local activities set against the background of the Royal Shakespeare Theatre’s productions of a cycle of history plays”.

In Stratford, at Shakespeare’s Birthplace, a new exhibition concentrating on the 1964 celebrations has just opened. Some of the events were described and illustrated in Fox’s book, including “countless festivals, productions and exhibitions, not to mention publications, postage stamps, medals and other commemorative souvenirs, publicized by the press, radio and television”. 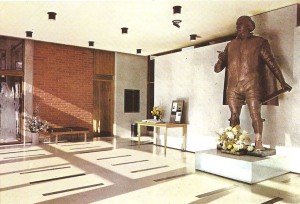 The entrance hall of the 1964 Shakespeare Centre

There was though a desire to make something permanent out of this special year, and the opening of the Shakespeare Centre was a key part of the 1964 celebrations. The building was, to quote Levi Fox, “originally conceived as a kind of international birthday present to the memory of William Shakespeare”. This idea can be traced back to not long after Fox’s appointment to run the Shakespeare Birthplace Trust in the 1940s. It was made possible by the gifts of Shakespeare-lovers from around the world, and included the work of international craftsmen such as the Hungarians Tibor Reich, a textile designer, and Paul Vincze, a medallist, and New Zealand glass engraver John Hutton.

The building symbolised what Levi Fox and the Trustees wanted the Shakespeare Birthplace Trust to become: it was a combination of modernity and tradition, showing respect for the past, a love of all things Shakespeare, and an awareness that he can only live through the work of the present. Education at all levels was at its heart.

In his book on The Shakespeare Centre, Fox described the new building as “primarily a place for study and research based on the Trust’s library and archive collections” combining as they did the collections of the Birthplace and the Royal Shakespeare Theatre, a move he first suggested in 1946. Standing across the garden from the Birthplace the building’s uncompromising modernity did not please all, but from within its quality is apparent. Hutton’s gorgeous engraved glass panels featuring characters from Shakespeare’s plays can be admired both from within the building and from the garden, and soften the entrance hall in which Douglas Wain-Hobson’s  hollow-eyed statue of Shakespeare stares towards the Birthplace. Every detail was considered: Tibor Reich’s green mottled carpet was inspired by seeing a forest from an aeroplane. Warm cherry wood was used for most of the panelling that covered many walls, and the original furniture came from Gordon Russell’s renowned Cotswold workshops. 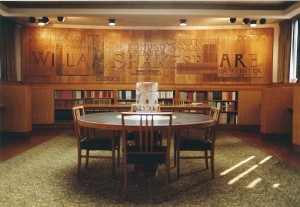 The 1964 Reading Room with carved panel and glass vase

My favourite piece in the building is the carved wooden panel designed by Nicolete Gray, standing in what was the Reading Room of the Library where I worked for over twenty-five years. Ahead of its time, the lettering shows the name of Shakespeare not as a solitary genius, but as one among many contemporary writers. The panel is made in five different timbers and many styles of lettering. An impressive piece in its own right it was also totally appropriate for its location and did not overwhelm this compact room. On the central table was a large glass vase by John Hutton, based on the idea of a Greek vase, engraved with the dance of the reapers from The Tempest.

Fifty years on, will the 450th anniversary have a lasting legacy? In Stratford there is much uncertainty about the future of the traditional events, and questions are being asked about Shakespeare’s heritage in a world that has become increasingly complex.

The internet and social media are making huge differences to how people “meet” Shakespeare.  But these are turning out to be just new ways of doing the same thing, encouraging people to appreciate and enjoy Shakespeare. I’m currently loving the MOOC Shakespeare and his World that uses the internet to bring real, physical, historic resources from the SBT’s Collections to the fore to explain the background to Shakespeare’s plays. It’s about using what we already have in a new way, and allowing thousands of people at the same time to hear academic Jonathan Bate’s analysis, and to share their responses with each other, free of charge. 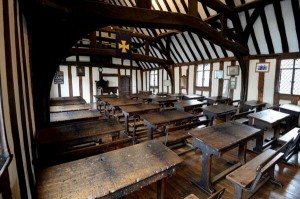 Stratford isn’t short of Shakespeare-related buildings, memorials and collections that need support: just recently King Edward VI School has launched a project to open both Shakespeare’s schoolroom and Stratford’s medieval Guildhall to the public. The schoolroom stands above the Guildhall and both are in need of restoration. Part of this process will inevitably include interpreting the spaces to increase their potential for education and enjoyment. Anyone who’s visited these rooms will know how inspiring they are even now and it’s a fitting project for this anniversary year. It will take £1million project of which the school has to raise at least £200,000. Some details are here, and I’ll let TV historian Michael Wood give you the full story in his promotional film.