Much Ado About Shakespeare at Easter 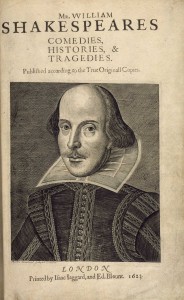 For Easter, a round-up of some of the many current Shakespeare-related events.

At 6.45pm, in Shakespeare: For and Against, playwright Mark Ravenhill “challenges our adulation of the Bard and asks: Is Shakespeare’s genius beyond question? Casting a sceptical eye over centuries of bardolatry, Ravenhill calls for a new approach to the plays”.  This promises to be a really thought-provoking programme, with a host of interviewees including Royal Shakespeare Company Artistic Director Gregory Doran, theatre director Phyllida Lloyd, actors Simon Russell Beale and Fiona Shaw, playwrights Edward Bond and Howard Barker and scholars Ania Loomba, Professor Gary Taylor, Ewan Fernie, Dr Martin Wiggins, Michael Dobson and Dr Erin Sullivan of the University of Birmingham Shakespeare Institute. 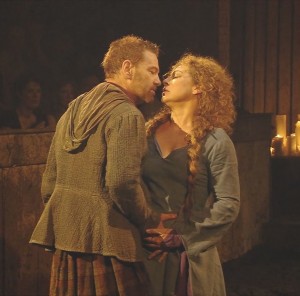 It’s followed by a radio broadcast of Shakespeare’s play Antony and Cleopatra, with the established team of Kenneth Branagh and Alex Kingston (seen in 2013 as Macbeth and Lady Macbeth in the Manchester International Festival), taking the leading roles. The play is described as a “great tragedy of love and power” , and “Shakespeare’s late and epic tragedy of mature love and the catastrophic fall from grace and power that it brings about”. Here’s a link for more information. Kenneth Branagh was also on Radio 4’s Today programme talking about the radio production and about the importance of Shakespeare. Here’s the link if you’d like to listen again. The interview with him is 2 hrs 43 minutes in.

Branagh makes his support for Shakespeare clear, and this point of view is also echoed by Rory Kinnear in this piece from the Independent. Rory has just won the Olivier award for Best Actor for his portrayal of Iago in the National Theatre’s production of Othello.

Almost everybody who’s a Shakespeare fan will have their own favourite productions. Michael Billington, who has reviewed stage productions for the Guardian for over three decades, is clearly not fed up of Shakespeare and is celebrating the big anniversary by writing about his favourites. There’s also a chance for readers to make their own contributions.

The Guildhall in London is remembering that Shakespeare on stage wouldn’t exist without the publication in 1623 of the First Folio, the posthumous collection of his plays. On Thursday 24 April at 6pm there is to be a lecture by Dr Emma Smith entitled Reading Shakespeare when he was new: the earliest printed texts in which she will ask what it was like to read a newly published play by Shakespeare. The Guildhall Library’s copy of the First Folio will be on display. 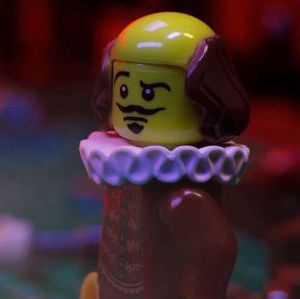 If you’re wanting some ideas about how to celebrate the big birthday, here is a roundup of events coming up from the Guardian.

And here’s a link to a light-hearted short animation film Shakespeare versus Shatner. There’s also a film showing how it was made using only lego pieces and shot in 4700 frames by AMAA productions in Austin, Texas. It’s delightful and just the thing for a lazy holiday weekend!