Shakespeare and his world: MOOC in progress 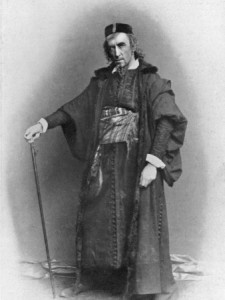 I’m very much enjoying the Shakespeare and his World MOOC created by the University of Warwick in collaboration with the Shakespeare Birthplace Trust, devised and presented by Professor Jonathan Bate. Last week the play being examined was The Merchant of Venice, the theme money and usury. I particularly like the way Bate connects key themes of the play to facts of Shakespeare’s life and to objects from the Museums, Library and Archives collections held by the Shakespeare Birthplace Trust. He looked for instance at the Quiney letter, the only piece of correspondence still in existence addressed to Shakespeare. Why is this relevant to The Merchant of Venice? Well the letter asks for a sizeable loan, just as in order to give money to Bassanio, Antonio has to borrow from Shylock. Bate skilfully links Shakespeare’s life to the world of speculation and trade in which The Merchant of Venice is set. Shakespeare must have been known to be rich in order to be asked for this large amount but it seems that Shakespeare didn’t provide the money himself and maybe acted as a kind of go-between (avoiding the trouble that Antonio got himself into). 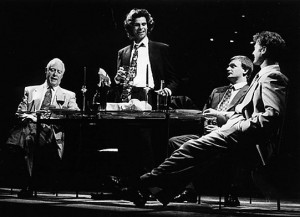 Antonio, Gratiano, Lorenzo and Bassanio in the 1993 RSC production of The Merchant of Venice

In what I found a particularly interesting bit of speculation, Bate suggests that if we are looking for a parallel for Shakespeare himself within the play, we might see him as one side of the melancholy merchant Antonio, or the go-getting chancer Bassanio, or the money-grabbing, ruthless Shylock, though none of these characters are as straightforward as that. Perhaps too, Shakespeare might have seen himself as an outsider, the man from the country, without a university degree, in the more cosmopolitan world of London, just as both Antonio and Shylock are both outsiders in Venice.

Bate also looked at the idea that the audience would have immediately made the connection between the Venice of the play’s title and the City of London. Both are built on water, with famous bridge crossings. Both are financial centres: in London Thomas Gresham’s Royal Exchange had opened in 1571 and the Rialto was the name of the whole financial district in Venice. In both places fortunes were made and lost on the ships trading around the world. Although Gresham’s Exchange was lost in the 1666 Great Fire of London Bate showed a plan of the rebuilt Exchange in which traders were around the sides of the hall while those managing the ships and their cargoes took the central area. And Shakespeare’s actors performed in more or less modern dress so the connection between the play and London life would have been very clear.

These connections continue to be made. London is still a huge financial centre. And although as readers we can make connections for ourselves, it’s in production that directors can really bring home those links between our own times and Shakespeare’s. Bate used a photograph of Henry Irving as Shylock to point out that it was not until the late nineteenth century that Shylock was interpreted on stage as a serious, even sympathetic character, a response perhaps to earlier views of evil Jews like Fagin in Dickens’ Oliver Twist.

Each week on the MOOC participants can vote for their favourite collections object. This production image was a popular choice of object, and I for one would love to see more. The Shakespeare Centre Library and Archive contains the whole of the RSC Archive, a treasure trove which illustrates how Shakespeare has been interpreted over the years through the artistic interpretations of directors, designers and actors, supported by historic material relating to productions from earlier centuries like the Irving picture. Different productions offer a whole range of views, for instance of the character of Shylock. Should he be seen as an outsider, or someone who has made every effort to integrate into Venetian society? Should he show off his wealth with fine clothes, or be seen to be miserly by dressing shabbily? Each production provides different ideas that can spark off a debate about the play itself. 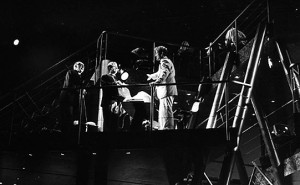 The set for Venice in the RSC production of The Merchant of Venice, 1993

The idea of connecting Shakespeare’s London with Venice was really brought to life in the production of the play staged by the RSC in 1993. Here Venice was indeed the City of London: the slick and shiny metal and glass set including ranks of computers dominated the stage, and Bassanio’s friends, dressed in suits, met up in a trendy wine bar. The audience understood immediately what kind of world the play was set in, and the theme of money, which Jonathan Bate has emphasised in the MOOC, was at the forefront. Shylock (David Calder) was almost completely integrated into the world of the Christian characters, wearing similar clothes but showed himself even more civilised by, when at home, relaxing in a comfy armchair while listening to classical music.

A few years before, the 1987 production had a different focus: set in the Venice of Shakespeare’s period, the foreignness of Shylock and Jessica was emphasised with both of them wearing exotic, colourful costumes. Antony Sher as Shylock even had a low couch on which he reclined, and he spoke with a strong accent. The set, including both a Christian Madonna and a daubed Jewish star, made it clear that this production was to be about religious conflict and Shylock’s isolation rather than the rights and wrongs of the financial system.

Evidence for these productions is to be found in the photographs, prompt books, reviews and videos of the performance archives. Comparing photographs of the sets, or of a few characters, or looking at the way in which the text has been cut in the prompt book, is a really stimulating way of thinking about the play through production choices.

This entry was posted in Legacy, Shakespeare on Stage, Shakespeare's World and tagged FutureLearn, Jonathan Bate, MOOC, Quiney letter, Shakespeare and his World, Shylock, The Merchant of Venice, Thomas Quiney. Bookmark the permalink.