Shakespeare, medicine and science, 450 years on 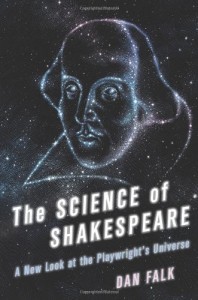 A new book is just about to be published linking Shakespeare and science, a pairing that still doesn’t happen very often in the study of Shakespeare.  This is at least partly because scientific methods based on experimentation and logical enquiry were still not the norm. Dan Falk’s book, The Science of Shakespeare, reminds me in its approach of Bill Bryson’s A Short History of Nearly Everything, explaining some of the trickiest ideas through the stories of the people who made the discoveries. Whereas Bryson took Einstein and Hubble, Falk looks at Thomas Digges and the wonderfully-named Tycho Brahe, both of whom were people who devoted themselves to astronomy and whose work, it seems, Shakespeare knew.

Like Bryson’s book, Falk’s is informative about the science as well as finding points of connection with Shakespeare’s work and life. In an article that appeared in the Daily Telegraph Falk explains:
Scholars are examining Shakespeare’s interest in the scientific discoveries of his time – what he knew, when he knew it, and how that knowledge might be reflected in his work.
Take astronomy. The plays are full of references to the Sun, Moon, stars, comets, eclipses and heavenly spheres – but these are usually dismissed as strictly old-school, reflecting the (largely incorrect) ideas of ancient Greek thinkers such as Aristotle and Ptolemy. Although Copernicus had lifted the Earth into the heavens with his revolutionary book in 1543 – 21 years before Shakespeare’s birth – it supposedly took decades for the new cosmology to reach England; and anyway, the idea of a sun-centred universe only became intellectually respectable with the news of Galileo’s telescopic discoveries in 1610. By then, Shakespeare was ready for retirement in Warwickshire.
But we shouldn’t be so hasty. The Copernican theory attracted early adherents in Britain, beginning with a favourable mention in Robert Recorde’s The Castle of Knowledge in 1556. The first detailed account of the theory by an Englishman came from Thomas Digges, whose book included a diagram of the solar system in which the stars extend outward without limit – a vision of a possibly infinite cosmos.
Shakespeare had multiple connections to the Digges family. For a time they lived a few hundred yards apart in London, and Digges’s son, Leonard, was a fan of the playwright and contributed an introductory verse to the First Folio. 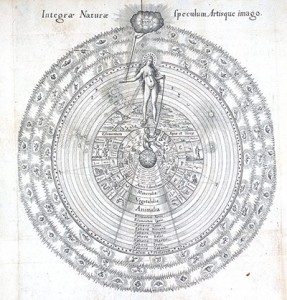 Meanwhile, at the British Library there is what sounds to be an intriguing exhibition entitled Beautiful Science. Here’s a link to the Guardian’s review. This exhibition looks at the aesthetics of scientific analysis, visualisations that are intended to explain statistical and scientific discoveries, beautiful in their own right. The earliest image in the exhibition, dating from 1617, is the “Great Chain of Being”, an image that illustrates the ancient Greek concept of classifying life on earth. To quote the website,
Beautiful Science explores how our understanding of ourselves and our planet has evolved alongside our ability to represent, graph and map the mass data of the time.
From John Snow’s plotting of the 1854 London cholera infections on a map to colourful depictions of the tree of life, discover how picturing scientific data provides new insight into our lives.
This free exhibition, bringing together science and the arts, continues until 26 May.

Coming up soon, to help celebrate the 450th anniversary of the birth of Shakespeare, is a new exhibition at the Library of the Royal Society of Medicine. Entitled Most Wholesome Physic: Medicine in the Age of Shakespeare, 1564-1616, this exhibition will run from 6 May to 26 July from Monday to Saturday. Admission is free. Full details are now on the RSM website, and here is their description of the forthcoming exhibition:
Almost all of the books on display were published in Shakespeare’s lifetime, and show many of the medical preoccupations of the age, liberally juxtaposed with quotations from the plays and poems. This was a great period for books published in the vernacular and therefore more accessible to a lay public, so much emphasis is given in this exhibition to works written in English, or translated into English. 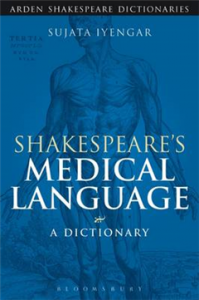 Last but by no means least, I’m delighted to report that Sujata Iyengar’s book Shakespeare’s Medical Language is now available in paperback. This book has solved many queries for me about Shakespeare’s medical references and helped me understand more about medical knowledge of the time while remaining readable, and I can really recommend it. Here’s a quote about the book:
Physicians, readers and scholars have long been fascinated by Shakespeare’s medical language and the presence of healers, wise women and surgeons in his work. This dictionary includes entries about ailments, medical concepts, cures and, taking into account recent critical work on the early modern body, bodily functions, parts, and pathologies in Shakespeare. Shakespeare’s Medical Language will provide a comprehensive guide for those needing to understand specific references in the plays, in particular, archaic diagnoses or therapies ‘choleric’, ‘tub-fast’ and words that have changed their meanings ‘phlegmatic’, ‘urinal’; those who want to learn more about early modern medical concepts ‘elements’, ‘humors’; and those who might have questions about the embodied experience of living in Shakespeare’s England. Entries reveal what terms and concepts might mean in the context of Shakespeare’s plays, and the significance that a particular disease, body part or function has in individual plays and the Shakespearean corpus at large.
You can buy the paperback here.