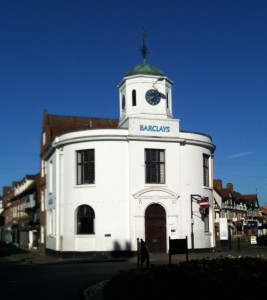 In Stratford’s town centre, Barclays Bank overlooks Bridge Street and the traffic island at the junction of Henley Street, Wood Street and High Street. It’s one of the town’s most visible landmarks, and never more so than on Shakespeare’s Birthday, when Bridge Street is filled with flags, dignitaries and onlookers. Outside the bank the band plays the National Anthem before the flags are pulled and the procession begins. Royal accessions, coronations and weddings have been marked here, and troops rallied here before departing for the battlefields of WW1. Nowadays the Market House is often photographed by tourists whose guides stop there to point out the town’s places of interest.

You might think, then, that Barclays Bank, originally the Market House, has always been admired as a quietly dignified structure. But this is far from the case. The very first sentence of Dr Robert Bearman’s pamphlet* on the building in the Stratford-upon-Avon papers series is “There can be few buildings in Stratford-upon-Avon which have provoked such vociferous and persistent criticism as the town’s Market House”.

I’m indebted to this publication for many of the facts in this post. The history of the building, in a way, dates right back to the time in the 1190s when the streets were laid out in a grid pattern. Bridge Street already existed, but making it wide allowed for the weekly market to continue there and made it the centre of the town’s trading activities. At some point the High Cross was erected at its top. By the late 1400s a building must have stood there as we know a clock was hung on it. There’s no visual record of this building until around 1800 when, a few years before it was replaced, Captain James Saunders drew it. It had remained much the same for centuries, standing close to the corner where Wood Street joins High Street.

Like later market buildings in the town, it was open at ground level with an enclosed upper floor. The base of the old cross stood at its centre. In Shakespeare’s time it’s thought that this covered area was where the glovers, including Shakespeare’s father, sold their goods.

But by Shakespeare’s time Bridge Street’s spacious marketplace had been divided by Middle Row, a central row of small shops that must have made the area very congested. The old Market House was taken down in 1821 and the current building put up at the junction of Wood Street and Henley Street, but with the row in place it was not the focal point of the street for people approaching from Bridge Street. The old cross itself was taken down, and Saunders, again, salvaged the base. This relic of the spot where John Shakespeare sold his wares was for many years in the garden of Shakespeare’s Birthplace. 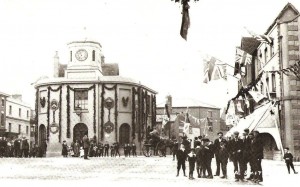 The Market House decked out for Shakespeare’s Birthday Celebrations, around 1908

The new building was opened in 1822. Three doors at ground level were entrances to the covered market, and stalls could also be erected round the outside of the building. The upper floor, meanwhile, was used as a meeting room. At about the same time an improvement scheme was devised which led to the gradual demolition of Middle Row, eventually completed in the 1850s, and the houses in Bridge Street received facelifts. Maybe with its surroundings becoming increasingly gentrified, the Market House began to look small and scruffy.

By the 1860s Stratford was definitely smartening itself up. It had a railway station and its own newspaper. Shakespeare’s Birthplace had been much improved, and in 1864 the Tercentenary of Shakespeare’s birth brought thousands of people to the town, including foreign visitors who were able to stay at smart hotels.

At the time of Garrick’s Jubilee in 1769 disparaging comments had been made about the state of Stratford’s streets, and these must have been remembered when it came to the Tercentenary. The Market House became the target for criticism, and in March 1864 the Corporation voted to erect a monument to Shakespeare where the Market House was. Fortunately for the Market House, although the celebrations successfully attracted crowds of visitors they lost money, so this idea was never pursued. It didn’t stop the criticism though: in 1869 the building  was called “ugly and inconvenient” , and in 1902 “ungainly, unattractive and … almost useless”. 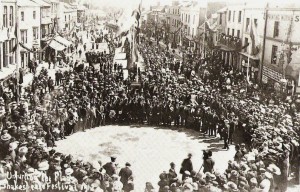 Bridge Street crowded with people for the Birthday celebrations in 1912, taken from the Market House

Eventually the United Counties Bank took the lease on the building and renovated it, closing off the side doors, improving the windows and adding a decorative porch before moving in during 1908. It has had much the same appearance ever since, and looking at the building now it’s hard to see how it could ever have been so unpopular. But even as work went on Edward Fox, the printer, wrote to the newspaper regretting that “the finest and most prominent site in Stratford” was not to contain a memorial  “which would confer honour and distinction on Shakespeare’s town”. In fact this elegantly understated building has shown itself to be an ideal backdrop to the busy activities of the town which probably has enough memorials to its most famous son.

PS By happy coincidence a post on the base of the original market cross has just been published on the SBT’s Finding Shakespeare blog at http://findingshakespeare.co.uk/stratford-upon-avon-high-or-market-cross-base.