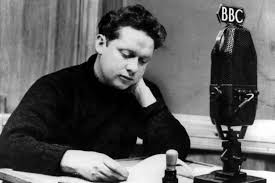 After Shakespeare, Dylan Thomas is said to be the most frequently quoted British poet, an extraordinary achievement for a man who died at the early age of 39. 2014 is the centenary of his birth, and although his actual birthday isn’t until October celebrations are well under way. Radio 3 has already staged a Dylan Thomas day on 5 May, and on this Sunday, 18 May, BBC 2 is screening a new drama A Poet in New York that focuses on the days leading up to his death in a New York hospital. Thomas is being played by actor Tom Hollander who has been interviewed about taking on the role. 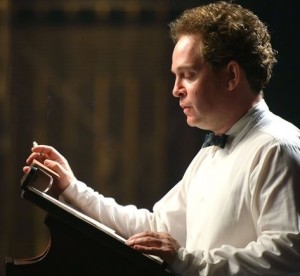 Thomas’s poetry demands to be spoken out loud, and one of the biggest challenges to Hollander was finding the right voice for Thomas, who was a famous speaker of his own work.
“There was an initial huge relief on discovering that he didn’t sound that Welsh,” says the actor, producing his iPhone on which he has stored recordings of Thomas performing his poetry. “Listen… he sounded more like Richard Burton. There’s some Welsh music to it, but it’s an English voice… This was a time when aspirant Welsh people were losing their Welsh and becoming the Anglo-Welsh.”

This poem was written at the time that Thomas’s father was dying, the son imploring his father to “Rage, rage against the dying of the light.” His father had been a great influence on him. An English Literature teacher at Swansea Grammar School, he read Dylan poetry from the age of two. By four the boy was able to recite speeches from Shakespeare. Both the tone of the poem and specific echoes refer to Shakespeare’s King Lear on the heath, where an old man rages against the elements:
Blow, winds, and crack your cheeks! rage! blow!
You cataracts and hurricanoes, spout
Till you have drench’d our steeples, drown’d the cocks!
You sulph’rous and thought-executing fires,
Vaunt-couriers to oak-cleaving thunderbolts,
Singe my white head!

The website Neurotic poets quotes from a letter Thomas is said to have written to an American fan:
The first poems I knew were nursery rhymes, and before I could read them for myself I had come to love just the words of them, the words alone. What the words stood for, symbolised, or meant was of very secondary importance — what mattered was the very sound of them as I heard them for the first time on the lips of the remote and quite incomprehensible grown-ups who seemed, for some reason, to be living in my world. And those words were, to me, as the notes of bells, the sounds of musical instruments, the noises of wind, sea, and rain, the rattle of milkcarts, the clapping of hooves on cobbles, the fingering of branches on a window pane, might be to someone deaf from birth, who has miraculously found his hearing. 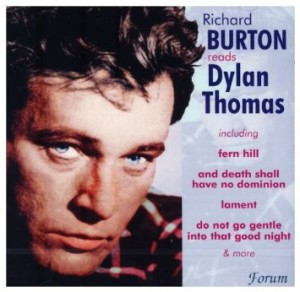 Although Thomas was a distinguished reader of his own poetry, and was recorded reading speeches from Shakespeare, it’s Richard Burton’s voice that is forever linked with Thomas’s poetry. His rich, dark, smoky voice with its Welsh intonation is a perfect match. As the image shows he recorded a great deal of Thomas’s work, but his 1954 recording of  the opening of Under Milk Wood is brilliant, and easily available on YouTube as here.

If you’d like to read more, this is the official Dylan Thomas website, and here is the link to the Dylan Thomas Experience.  Here’s also an L.A. Times page that includes links to Thomas-related webpages.   And the BBC’s website also links to lots of background material.