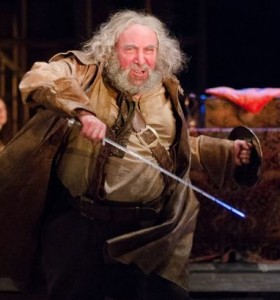 Earlier this week I attended the performance of Henry IV Part 1 performed at the Royal Shakespeare Theatre, that was being simultaneously broadcast to cinemas around the UK, and is to be shown in schools, around the world and eventually published on DVD.

From my seat in  the upper gallery I could see the preparations that had been carried out for the filming: rows of seats had been removed to allow for several cameras, particularly one attached to a huge telescopic arm able to rise high above the stage or get close to the actors at almost stage level. I knew that every shot had been closely planned in advance.

The evening began with the artistic director (also the director of the production) Gregory Doran as warm-up act. As the performance began, I thought about those cinema audiences: it’s a stirring opening, rich in pageantry and music. How much did one of the cameras focus on the unmistakeable figure (for those of us who saw Richard II anyway) of Richard, whose ghostly presence is felt in all the plays that follow?

When the rebels talked about how they would divide the kingdom after they have ousted the King the telescopic arm extended and rose high to get a view of the huge map spread out on the stage floor. Then, during the intimate scene when the Welsh lady sings, the same camera was lowered almost to stage level to get close-ups of the two couples sitting on the stage floor. During moments like Falstaff’s great honour speech, when he’s alone on stage, I wondered how this was being filmed: Antony Sher is as proficient on films as on stage. Was one of the cameras looking him in the eye, or was he maybe altering his performance to engage with it?

How, I wondered, were the scenes in Eastcheap filmed: on the busy stage there were several locations: the balcony where the interview had been held, as well all round the big stage. Would the audience in the cinema see how actors made their entrances down a set of wooden steps, from upstage, or along a walkway through the auditorium? In the theatre I’m used to being able to choose which part of the stage to focus on, though productions always subtly direct the audience’s attention. What decisions had been made about where the cinema audience would be made to look? 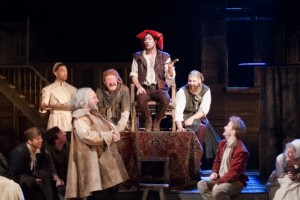 One of the most striking sequences comes when Falstaff and Hal rehearse Hal’s interview with his father the king. “Thou wilt be horribly chid tomorrow when thou comest to thy father. If thou love me, practice an answer”, suggests Falstaff. It’s a wonderful piece of theatre. First Falstaff plays the king, and Hal plays himself. Then the roles are reversed, with Falstaff playing Hal and Hal playing the king, taking the opportunity to have a go at Falstaff. Later we get the actual scene where the King harangues Hal for his “barren pleasures, rude society”. Would the filming make connections between these scenes to match the obvious parallels on stage?

The final fight between Hotspur and Prince Hal was thrilling on stage. While theatre audiences willingly imagine the violence of real sword fights, cinema audiences are used to seeing more realism. Would it be so exciting on film, and would a cinema audience respond differently to what is clearly not a “real” fight? I’m very much looking forward to seeing how this works onscreen.

It’s Falstaff though that is the heart and soul of the play. Way back in 1777, in his Essay on the Dramatic Character of Sir John Falstaff, Maurice Morgann stoutly defended Falstaff from the charge of cowardice.  But in his essay he admits “there is something strangely incongruous in our discourse and affections concerning him. We all like Old Jack; yet, by some strange perverse fate, we all abuse him, and deny his the possession of any one single good or respectable quality…He is a character made up… wholly of incongruities; a man at once young and old, enterprizing and fat, a dupe and a wit, harmless and wicked, weak in principle and resolute by constitution”.

Antony Sher as Falstaff is an interesting and not particularly obvious choice. It’s true he’s played the Fool in King Lear and Malvolio in Twelfth Night, but he’s much better known for Richard III, Iago, Macbeth, Leontes and Prospero. There is some humour in these roles, but they can be cold and unlikeable. Sher succeeds in making us like Falstaff, and in  feeling the sadness that runs beneath the surface.

On the Shakespeare message board SHAKSPER, there is currently a debate about the subject of who originally played Falstaff. Shakespeare’s resident funny man was Will Kemp, but Falstaff isn’t just a clown. John Briggs thinks that Shakespeare may have played the part himself, an attractive thought, but surely there would be some tradition (like the one that he played Adam in As You Like It). There are other candidates, but maybe we do Will Kemp a disservice by assuming he wasn’t good enough.