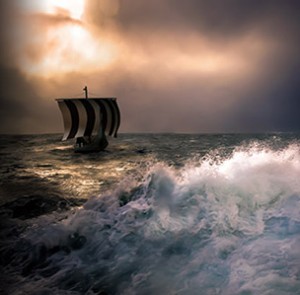 A week or so ago I attended the live relay for Vikings: life and legend, the British Museum’s current blockbuster exhibition. I expected it to consist mostly of TV historians Bettany Hughes and Michael Wood walking us round the exhibition showing us items on display, with some background about the history of the Vikings in the British Isles. In other words, I expected it to be like going to the exhibition accompanied by an expert.

What we got was quite different: Wood interviewed Neil MacGregor, the head of the British Museum about the origins of the exhibition and the new gallery in which it’s displayed, people with specialist knowledge were interviewed including boat-builders and yachtsman Robin Knox-Johnston, as well as experts and curators. I don’t mean to imply this wasn’t interesting or engaging, but I kept wondering what it was that made it different from watching a TV documentary since almost all the elements of the evening were pre-rehearsed and some were pre-recorded.

But then there were the unpredictable moments: the exhibition curator Gareth Williams and Bettany Hughes donning gloves before excitedly picking up one of the most precious items, the bowl in which a great Viking hoard was packed, and even better the moment when a Viking warrior in full armour stalked towards Michael Wood, removing his helmet to reveal, again, Gareth, sweating profusely, eyes gleaming as he demonstrated the use of the weapons a Viking raider would have carried. It was these that for me added value to the live experience. 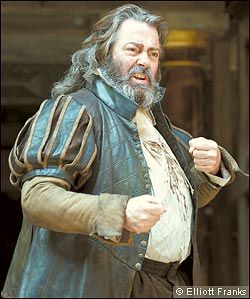 Live relays of plays in performance, and Encore performances where the film of the live relay is shown again, are now becoming quite common. With the live relay there’s always the risk of something going wrong as there is in the theatre, but otherwise what is the difference between the live and the Encore? I’ve recently been catching up on Erin Sullivan’s Digital Shakespeares blog, in which she has written several times about live relays, about the different ways in which they can be filmed and how they relate to the experience of being in the theatre. She does a lovely job of reminding readers of how much choice there is: should the relay include lots of close-ups and changes of camera angle so that it feels like a film, or take wide shots that remind the viewer of the presence of the audience? This post considers the style adopted by the Globe for its celebrated productions of the Henry IV plays with Roger Allam playing Falstaff. 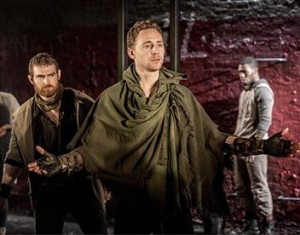 While this one examines in great detail the filming of the Coriolanus with Tom Hiddleston at the Donmar. Perhaps inevitably given Hiddleston’s star status “the chief visual mode for this production was no doubt the close-up”, but not just for him. In the first scene between Volumnia and Virgilia “I counted 18 camera changes in the women’s opening exchange, which is Shakespeare’s text runs to about 25 lines if left uncut”. The Donmar is a studio theatre and this intensity does bring the cinema audience into close proximity with the performers, but I agree with her when she says “I still couldn’t shake off the feeling that I wanted the visual frame to slow down, and to back off. I wanted to see and explore more of the stage space on my own terms, to attend to Hiddleston’s powerful presence and even celebrity within the context of the whole theatre (audience included).” 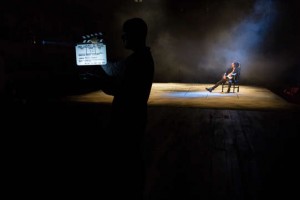 If you want to be made to think about how you represent a live theatre performance on film, John Wyver’s Illuminations blog explains the process of planning and filming the trailer for the RSC’s current production of Henry IV which is to be seen both onstage and in due course in cinemas.

Back with Digital Shakespeares, another post considers the connection between different kinds of live events. Why do we want to attend a live relay when, the following week, we can attend the Encore performance? Sullivan makes a parallel with the music festival.

In his introduction to the 1987 collection Time out of Time: Essays on the Festival, the anthropologist Alessandro Falassi writes that festival environments are centrally defined by three factors: ‘time, space, and action’. Time, in the sense of normal, mundane time disrupted and suspended; space, in the sense of either everyday or, conversely, rarely used spaces claimed for collective festival activity; and action, in the sense of the intensification of special activities such as prayers, performances, or feasts not typically a part of daily life. Falassi suggests that when these three things come together, normal life ‘is modified by a gradual or sudden interruption that introduces “time out of time,” a special temporal dimension devoted to special activities’.

There is, Falassi implies, no substitute for being there.