Motley’s the only wear: Shakespeare and design 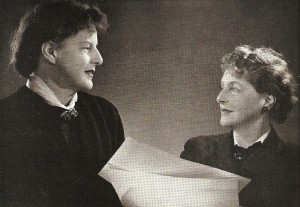 Margaret and Sophia Harris: Two-thirds of the Motley design team, in 1955.

The name Motley will be familiar to anyone interested in twentieth-century theatre design, or in the history of Shakespeare on stage.

This all-female group designed for straight plays, Broadway musicals, ballets, operas and even films over a period of forty years in London, Stratford and New York. It was not uncommon for women to be theatre designers, in fact for much of the twentieth century design was almost the only area in which women seem to have prospered apart from acting. But the Motleys consisted of two sisters, Margaret (Percy) and Sophia Harris, and Elizabeth Montgomery who worked both collectively and individually on a variety of high-status projects. Their first work was in 1932, designing Romeo and Juliet for a production directed by John Gielgud in London, and for many years they were associated with him. Their first commission for Stratford came in 1939 just before the outbreak of war. The war inevitably caused a halt in their work, but soon after the two Harris sisters resumed their work and from 1948 to 1959 they were regulars at the Shakespeare Memorial Theatre. In all they designed for seventeen Shakespeare productions in Stratford, several of which went on international tour. 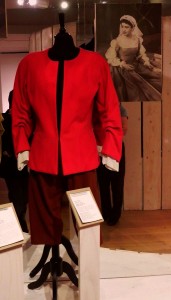 Last year I was delighted to see an original Motley-designed costume in the RSC’s Into the Wild exhibition, Peggy Ashcroft’s jacket and trousers, worn by her when playing Ganymede in the 1957 production of As You Like It. It’s the simplest of costumes, but what struck me, being familiar with the black and white images of the production, was its bright red colour, so appropriate for the exuberance of the character in the rustic forest of Arden setting. 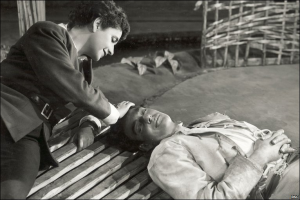 Peggy Ashcroft as Rosalind with her Orlando, Richard Johnson, 1957

The Motleys nearly always used strong colours and simple, bold outlines. They looked at the stage as a whole, identifying how different costumes and the set would work together.

In his introduction to the book Shakespeare Memorial Theatre 1957-9, Ivor Brown commented on the design for the 1958 production of Hamlet, directed by Glen Byam Shaw and starring Michael Redgrave. “The setting, by Motley, was columnar and starkly simple. The scarlet uniforms of the Royal Guard blazed and the sounds of a revelling court came floating aptly to the battlements”. 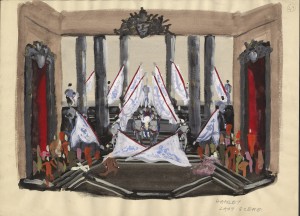 He’s describing the opening court scene, but the illustration shows the final moments of the play where the body of Hamlet is carried upstage, as white flags are lowered. Characters on stage are indicated by simple lines of paint in different colours, showing the overall effect they wanted to achieve.

Not surprisingly given how much they achieved during their four decades of work, their original designs have found their way into many collections. And there must be many others in private hands: there was a widespread tradition of designers giving designs to the actors for whom they’ve designed costumes. The Victoria and Albert Museum also have a collection of designs by Motley which are illustrated on their online collections database. 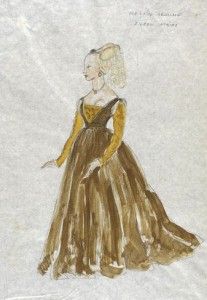 The one illustrated is of the costume worn by the young Eileen Atkins as a lady in the Shakespeare Memorial Theatre’s 1958 production of Romeo and Juliet. Other original designs are held by the University of Bristol Theatre Collection and, for Shakespeare Memorial Theatre productions, the Shakespeare Centre Library and Archive. The Motleys themselves, though, had kept many of their own designs and in 1981, after their retirement, Professor Michael Mullin of the University of Illinois steered an agreement to purchase their own collection which is now kept in the Rare Book and Special Collections Library. The descriptions and digitised images are now available online, forming a valuable resource on the history of twentieth-century theatre. The Motley Collection of Theatre and Costume Design comprises “over 5000 items from more than 150 productions in England and the United States. These materials include costume and set designs, sketches, notes, photographs, prop lists, storyboards, and swatches of fabric. ” 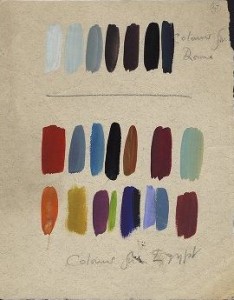 Colour palette for Antony and Cleopatra, 1953

Another great find among the Illinois images are a couple of colour palettes, showing the range of colours to be used for costumes. I particularly like the one for the 1953 SMT production of Antony and Cleopatra in which “colours for Rome” (greys and black) contrast with “colours for Egypt”(earthy reds and yellows, bright blue). Sadly there seem to be only a couple of these still in existence, but they’re wonderful at showing the kind of contrasting worlds the designers were intent on producing. Below is one of the designs for the Egyptian queen Cleopatra. 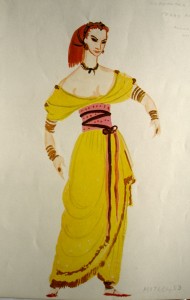