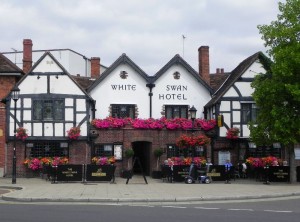 In 1927, during renovation work in a building in Stratford-upon-Avon, an important discovery was made. The White Swan Hotel was being modernised by the hotel group Trust Houses Limited, and workmen found evidence of surviving wall-paintings concealed behind panelling. Work was immediately halted and experts were brought in to examine the frescoes. In a letter to the Times of 28 July 1927 Martin Conway noted “This, unfortunately, has not always been the case in Stratford and elsewhere, so that many precious heirlooms of national art have been irretrievably damaged”.

The exciting news for Shakespeare-lovers was that the paintings could be dated to the mid-sixteenth century. The building itself dates back to the mid-fifteenth century, and by 1560 was known as the King’s House or Hall, an inn owned by the Perrott family. One of Shakespeare’s friends, Richard Tyler, married into this family. The paintings have been dated to around 1555-1565, so would have been quite new in Shakespeare’s time.

The subject of the paintings is the biblical story of Tobias and the Angel, from the apocryphal book of Tobit. In the story Tobias is sent on a journey to a distant city to collect money owing to his blind father. He is accompanied by a mysterious man. Along the way Tobias stops to wash his feet in a river and is attacked by a monstrous fish, which he catches and kills. He is advised by his companion to save the fish’s heart, liver and gall. These are later used to remove a curse from a woman Tobias wishes to marry and, on return to his home, to cure his father’s blindness. The mysterious stranger is revealed to be the Angel Raphael.

The paintings as reproduced in the Victoria County History

The paintings found in the White Swan were, inevitably, damaged and incomplete, but to even an inexperienced eye they are impressive, the figures dressed in recognisably Elizabethan costume. Here is part of the description from the Victoria County History of Warwickshire:
The wall-paintings show three scenes from he Apocryphal book of Tobit. The larger, 9 ft 2 in long and 3 ft broad from the ceiling to the lower edge, was probably the reredos of a high-backed settle or a buffet. At the top is a 12-in frieze. Below this it is divided into four bays by fluted classic shafts. The outer bays are filled with rather coarse foliage and flowers. The second bay, which has a kind of raised curtain like a scene at a theatre, shows Tobit and his wife, wearing hats and black mantles, handing a letter or some other object to Tobias, who wears a doublet and striped trunk hose; behind him is a sinister figure representing Raphael, half hidden by the drapery. The second scene represents a city with turrets and pinnacles, and the figures of Tobias and Raphael, apparently accompanied by a dog. Much of this scene is destroyed. The frieze above is bordered and divided into long and short panels; the latter contain flowering plants; the longer have scrolls inscribed in black letter describing the scenes. A wall-post divides this part from the next, which is a 2 ft 5 in wide, and rises from floor to ceiling, crossing a timber-strut; this scene shows the river Tigris with Tobias and Raphael cutting open the fish; in the foreground is a landscape with trees and in the back-ground the gate and buildings of the walled city; part of the scene is destroyed.

Mr Conway’s letter included a report from Mr Philip M Johnston, an authority on English mural paintings who commented that “All this is very spiritedly set forth in the painting; and it may be remarked generally that the art-quality of the work is exceptionally good, and obviously that of an English artist”. It must have been a high-status feature of the inn, admired by visitors and local alike in Elizabethan Stratford.

Since the paintings were discovered they have remained on show, behind glass. The hotel underwent a huge revamp in 2012 and the paintings are still there to be seen by anyone dropping in for a drink or a bite to eat. They are one of Stratford’s real treasures, a rare survivor that gives an idea of what interiors were like in the sixteenth century. 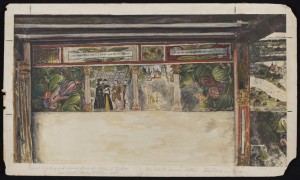 Francis Reader’s sketch of the wall paintings, at the Victoria and Albert Museum

Being now difficult to photograph it was fortunate that the artist Francis W Reader sketched them not long after they were discovered.  His illustrations are now in the Victoria and Albert Museum along with many other examples of his sketches of Tudor wall-paintings. The main part of his picture was reproduced in the Victoria County History published in 1945.

According to the description of a Florentine painting of the same subject now in the National Gallery, the story’s emphasis on filial piety, enterprise and charity made it popular among the wealthy merchants of Florence. Presumably these characteristics also influenced the choice of the Perrots when decorating their inn in the prosperous market town of Stratford-upon-Avon.

One Response to Stratford’s Elizabethan wall-paintings