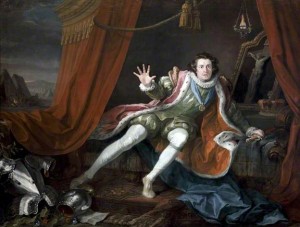 Few dates in the history of Shakespeare on stage are as significant at 19 October 1741. Then the young David Garrick (billed as “A gentlemen who never appeared on any stage”) performed the part of Richard III at Goodman’s Fields in London. The importance of this appearance was immediately recognised.

Arthur Murphy, writing six decades later in 1801, commented that he made “on the very first night, a deep impression on the audience. His fame ran through the metropolis. The public went in crowds to see a young performer, who came forth at once a complete master of his art”. Alexander Pope wrote “Garrick never had his equal, and never will have a rival”.

Richard III became one of Garrick’s most famous roles. The text he used was the adaptation by Colley Cibber, who had performed in the role from 1700-1739. Later Garrick made his own adaptations, but always based on Cibber, and his versions were even shorter than Cibber’s, which was in its turn very much shorter than Shakespeare’s. Garrick apparently based his interpretation on Richard’s lines from Act 5 Scene 6 of Henry VI Part 3 “I that have neither pity, love, nor fear”.

Garrick was particularly praised in the wooing of Lady Anne, the scene in his tent before the battle of Bosworth, and the battle scene of Richard’s death. Garrick continued to play Richard III throughout his long career and was painted in the role several times. I’m looking at two of the most famous, one from his early years, and one from the last years of his acting career. Neither painting shows Garrick in the early part of the play where Richard is at his most manipulative and evil. Hogarth painted his renowned portrait of Garrick in the Tent scene not long after that first performance. This is now one of the most famous paintings of Shakespeare on stage, and can now be seen in the Walker Gallery, Liverpool. Thomas Wilkes, writing in 1759, described him at just the same moment: “There is a fine contrast in the tent scene of the last Act, between the calm soliloquy spoken by Richard before he retires to his couch and the horror with which he starts up and comes forward after the ghosts have uttered their predications… I do not recollect any situation in Tragedy in which he appears to more advantage than that in which he rises and grasps his sword before quite awake”. 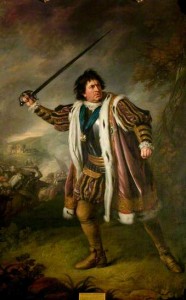 Another painting of Garrick in the role, painted by Nathaniel Dance-Holland in 1771, shows Richard, unhorsed on the battlefield of Bosworth Field, waving his sword. It’s the moment when he shouts in desperation ” A horse, a horse, my Kingdom for a horse”.  Garrick was particularly fine when depicting Richard towards the end of the play when “All was rage, fury, and almost reality.”

Unlike the elegantly-dressed but haunted figure in the Hogarth painting, this one shows a dishevelled Richard, still defiant but with an air of desperation. It captures the uncertainty of the character: early on it was a “fiery depiction of … a malicious murderer” , but according to Davies in 1808, the audience “were especially charmed when the actor, having thrown aside the hypocrite and politician, assumed the warrior and the hero”. It is reported that “the death of Richard was accompanied with the loudest gratulations of applause”. It now hangs in the Town Hall of Stratford-upon-Avon.

Garrick appealed directly to his audiences. His performing style “banished ranting, bombast, and grimace; and restored nature, ease, simplicity, and genuine humour”. As Richard, he found the complexity of the character. While deceptive and wicked, “wherever he speaks of his own imperfections, he shews himself galled and uneasy”.

From Weds 25-Fri 27 June 2014 at The Rose Theatre in Kingston-upon-Thames a conference is being held on Garrick and Shakespeare, jointly hosted by Kingston University and the Rose Theatre. While Garrick is best remembered as an actor, he was also a theatre manager, playwright and poet. The notes for the conference suggest that he was “possibly both the most praised and vilified cultural celebrity of his generation. Authors whose plays he rejected and performers he did not employ were not sparing in their attacks”. This conference aims to focus on his achievements in Shakespeare, and to re-examine his controversial reputation.

Speakers will include Michael Dobson, Norma Clarke and Peter Holland.  It will include a lecture by actor Simon Callow, a trip to Garrick’s Temple in Hampton, a performance by the Hampton Players of The Celebrated Mr Garrick and the British premier screening of Simon Callow’s new film Miss in her Teens, based on David Garrick’s 1747 play of the same name.