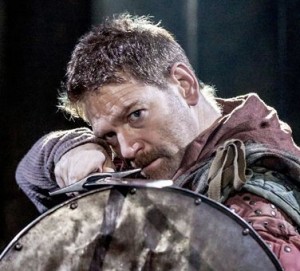 Originally produced at St Peter’s Church, Manchester as part of the Manchester International Festival in 2013, it has recently transferred for a short season to New York, though if you haven’t seen it already, sadly you’ve now missed the live event.

It gained terrific reviews: the Daily Express described how it packed “a hell of a wallop”, and here is an extract from the New York Times:
An utterly assured and intelligent portrait of a desperate and less-than-brilliant man… this Macbeth is a crowd pleaser in the best sense…The impeccably drilled ensemble members…sustain a headlong pace without sacrificing clarity. Throughout you have the sense not only of events but also entire cycles of history succeeding upon one another rapidly and inexorably…Fast, furious and unstoppable, time keeps rushing forward in this Macbeth, knocking the breath out of everyone, audience included.’

While in Manchester it was broadcast live by National Theatre Live and will, I hope, receive some Encore presentations following the success of the New York transfer. 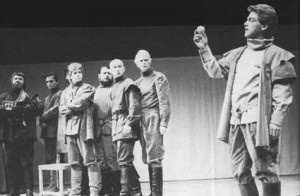 Kenneth Branagh has probably done more than anyone alive to bring Shakespeare to the mass audience, with films of Henry V, Hamlet and, Much Ado About Nothing among others. His first major success with Shakespeare was the 1984 production of Henry V for the Royal Shakespeare Company in which, aged just 24, he became the youngest person to play the role in Stratford. I’ve just been interviewing Mairi Macdonald, a local archivist and historian, who remembers his performance vividly. Here are some of her memories.

This entry was posted in Legacy, Shakespeare on Stage and tagged Henry V, Kenneth Branagh, Macbeth. Bookmark the permalink.