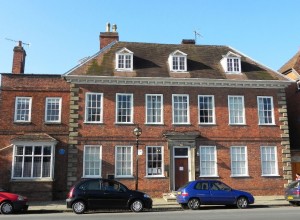 Down at the Shakespeare Institute in Stratford-upon-Avon the students are holding another marathon playreading. In 2013 it was Beaumont and Fletcher, with a tally of 53 plays and 1 masque. This year, between 9 and 28 June they are taking on Thomas Heywood, and over these twenty days they are reading 37 plays. The Beaumont and Fletcher Marathon aimed to encourage discussion about the disputed dating of some of their plays: with Heywood the challenge is to look at “the authorship of some of the plays traditionally attributed to Heywood, but whose authorship is still disputed”. It’s no wonder that Heywood has been suggested at the author of unattributed plays. In his preface to The English Traveller in 1633 he claimed to have had “an entire hand or at least a main finger in two hundred and twenty plays”.  With fewer than twenty plays being printed under his name during his lifetime there was plenty of scope for speculation. Perhaps fortunately for the Shakespeare Institute students most of the 220 plays that Heywood contributed to, like so many of those performed on the early modern stage, are lost.

Also in The English Traveller he wrote “It never was any great ambition in me, to be in this kind voluminously read”, preferring instead to have his plays performed in the theatre. When he did approve publication of one of his plays he stressed it was with the consent of Queen Anne’s Men. The copyright in a play, in so far as this existed, belonged to the company, not the writer. 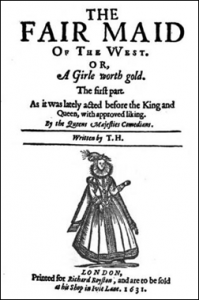 Title page for The Fair Maid of the West

Heywood is something of a mysterious figure, born around 1574 in Lincolnshire and probably be the son of Robert Heywood, a rector. It is believed that he attended the University of Cambridge but left without a degree, possibly because of the death of his father. Maybe there is a parallel with Shakespeare whose education is thought to have been cut short because of his father’s financial problems. Like Shakespeare, Heywood’s first published work was a long poem, Oenone and Paris, and it’s thought that in the same year, 1594, he wrote his first play for the theatre, The Four Prentices of London. This popular romance was mocked in Beaumont’s The Knight of the Burning Pestle. Although he excelled in writing about domestic subjects he also wrote a sequence of five plays on Greek mythology. Beginning with The Golden Age, he went on through The Silver Age and The Brazen Age, finishing with The Iron Age which told the story of the Trojan War in two parts. Again like Shakespeare Heywood combined writing for the stage with acting. He became an actor-sharer in Worcester’s Men for whom he wrote from about 1599 to 1614, and without doubt his acting gave him, as it did Shakespeare, a feel for what audiences enjoyed. His plays are full of incident, romance and broad humour, though he also wrote chronicles and tragedy. His best-known plays are the comedy The Fair Maid of the West and the serious drama A Woman Killed With Kindness.

Heywood wrote much apart from those 220 plays. He created seven pageants for the Lord Mayor of London celebrating mercantile values. Although Heywood cared little for the future of his plays, the same was not true of the non-dramatic works, on which he spent more and more time towards the end of his long career (he died in 1641). These included the poems The Life and Death of Queen Elizabeth and Troia Britannica. 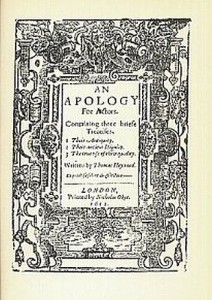 Title page of An Apology for Actors

The prose work for which he is best remembered, though, was An Apology for Actors, written in 1612. This stoutly defended actors from the charges of lewd and disorderly behaviour made against them by Puritans and others. What he says applies to Shakespeare, John Heminges, Henry Condell, Edward Alleyn and others:
Many amongst us I know to be of substance, of government, of sober lives and temperate carriages, housekeepers, and contributory to all duties enjoined them equally with them that are ranked with the most bountiful.

As a writer himself, he also suggests that players have been instrumental in improving the language:
Our English tongue, which hath been the most harsh, uneven and broken language of the world, part Dutch, part Irish, Saxon, Scotch, Welsh, and indeed a gallimaufry of many, but perfect in none, is now, by this secondary means of playing, continually refined, every writer striving in himself to add a new flourish unto it; so that in process, from the most rude and unpolished tongue, it is grown to a most perfect and composed language. *

Shakespeare contributed more new flourishes to the language than most, and in the 1635 The Hierarchy of the Blessed Angels, Heywood affectionately remembers Shakespeare the writer:
Mellifluous Shakespeare, whose enchanting Quill
Commanded Mirth or Passion, was but “Will”.

The playreading is taking place under the guidance of Dr Martin Wiggins and the full timetable for the playreading is given on the website. Auditors are most welcome, and as the text is projected on a screen it’s easy to follow as it is read out. Most importantly, the reading is raising funds for the Lizz Ketterer Trust which gives a US student the chance to experience full immersion in Shakespeare at Stratford as well as providing research bursaries for Shakespeare Institute students. If you’d like to donate details are on the website.

*I’m indebted for the quotations from The Apology for Actors to Stanley Wells’ book Shakespeare & Co.