Shakespeare and the UNESCO Memory of the World 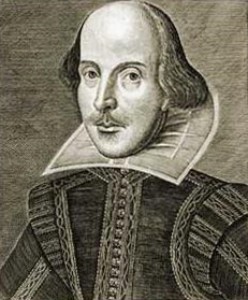 The good news has been announced that the Shakespeare documents held by the National Archives and the Shakespeare Birthplace Trust have been accepted onto the UNESCO Memory of the World UK register, recognising their national and international significance.  This is how UNESCO describe the documents:

Shakespeare left a documentary trail of his life, which was divided between his home town, Stratford-upon-Avon, and London. These ‘Shakespeare Documents’ bring together two vital strands of Shakespeare’s life – the enduring influence and draw of home and the excitement and opportunities of Elizabethan and Jacobean London, where his career flourished.

William Shakespeare’s genius endures through his creative works, his characters, stories and language. Understanding the man behind the works has long captured public imagination. The documentary sources are invaluable as they allow us to consider Shakespeare’s personal narrative – his birth, death, family affairs, property and business dealings – as well as his context within a period of history that saw major changes in religious and political society.

The ‘Shakespeare Documents’ are also powerful beyond their evidential value.  They provide a tangible connection to Shakespeare allowing us to get closer to a man who died some 400 years ago yet continues to have an unparalleled influence on language and culture in the UK and beyond.

There are seventy-nine known ‘Shakespeare Documents’. The Shakespeare Birthplace Trust and the UK National Archives have responsibility for caring for the majority of these.

In a press release on 20 June 2014, Clem Brohier, Acting Chief Executive and Keeper of The National Archives made the following announcement:
‘We are extremely pleased that the Shakespeare documents held here at Kew have been awarded this international recognition. It is testament to their importance not only to the UK but to the wider literary and cultural world…

The significance of the ‘Shakespeare documents’ relates directly to William Shakespeare’s unrivalled literary achievements, his status as England’s national poet and the global cultural impact of his work… All the nominated documents are handwritten sources, two of which we hold have Shakespeare’s signature on them. This, combined with their historic and cultural significance, underlines their irreplaceability.

There will be an opportunity for the public to see some of them in 2016 when The National Archives stages a programme of events to mark the 400th anniversary of the playwright’s death, and Professor Grace Ioppolo notes, in her post written for the National Archives blog on 23 April 2014, that in 2016 a consortium of US and UK libraries and archives will contribute to a travelling exhibition of manuscripts and books associated with Shakespeare’s life and career. Some of the handwritten documents that have been recognised by UNESCO will be among them, and will allow people to see them “in the flesh”, helping to fulfil the aim of the register to broaden access to the collections.

For more information here’s a link to Professor Grace Ioppolo’s post, which is one of several entries on the blog that relates to Shakespeare. 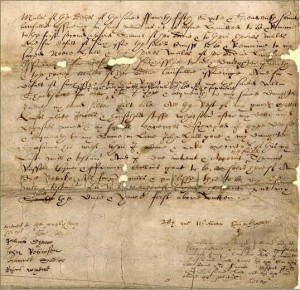 A page from Shakespeare’s Will

The Stratford documents include the famous Quiney letter, and the parish registers that contain multiple references to the baptism, marriage and burial records of members of Shakespeare’s family. The London records include Shakespeare’s Will, the document ordering ‘scarlet red cloth’ to Shakespeare and his colleagues for the royal entry of James I into London in 1604, another listing plays performed at court of which some were by ‘Shaxberd’, and, showing his human side, a list of tax defaulters that names Shakespeare among, it has to be said, many others.

Given that the aim of the UNESCO award is to help raise the profile of collections, and to make them easier to access, wouldn’t it be a great project for The National Archives and the Shakespeare Birthplace Trust to make high-quality digitised versions of these documents available online together with the scholarly articles from these books which do so much to explain their significance? All the work has already been done (though full transcripts would add much to the usefulness of the images).

If you’re not familiar with the UNESCO project, the UK register is a country-level programme that complements the international register begun in 1992 with the aim of ensuring that the world’s documentary heritage is protected and preserved for all. The UK register already lists 41 collections including Hereford’s Mappa Mundi. Items on the international register include Eleanor Roosevelt’s papers, Georgian Byzantine Manuscripts, documents relating to Roald Amundsen’s South Pole Expedition, and Egypt’s Mamluk Qur’an Manuscripts. It’s an extraordinary list covering documents representing ancient and modern cultural achievements and developments in social, political and medical history. The UNESCO site lists all the collections being added to the UK register, and describes the significance of the documents.

3 Responses to Shakespeare and the UNESCO Memory of the World