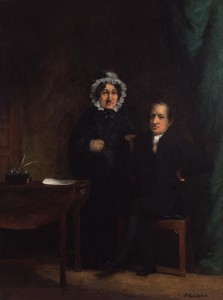 In a recent survey of childrens’ favourite books A A Milne’s much-loved Winnie the Pooh, written in 1926 came top. Second, perhaps more surprisingly, came the even older and quirkier Alice in Wonderland, published in 1865. Given that most of these surveys tend to favour recent books or films, I was surprised to find no Harry Potter on the list, but then noticed the survey only asked adults!  In fact no book published since 2000 came anywhere in the top 10. It was published with the serious purpose of helping to promote childrens’ reading and adults reading to children, a project with the backing of Barnardos and John Lewis.

The survey also limited it self to the last 150 years. Even if it hadn’t, I doubt if Charles and Mary Lamb’s Tales from Shakespeare would have made it onto the list, but this book must have introduced hundreds of thousands of children to Shakespeare’s plays in the 200 or so years since it first appeared.

Brother and sister Charles and Mary Lamb first published their book in 1807. It consisted of stories based on just twenty plays. Mary took on the comedies and romances: The Tempest, The Winter’s Tale, Twelfth Night, As You Like It, All’s Well That Ends Well, Measure for Measure, Twelfth Night, A Midsummer Night’s Dream, Cymbeline, The Merchant of Venice, The Two Gentlemen of Verona, Much Ado About Nothing, The Comedy of Errors, Pericles. Charles wrote the tragedies: King Lear, Hamlet, Timon of Athens, Romeo and Juliet, Othello, Macbeth.

The aim was to reduced the complications of the stories and to make them easier to understand. In the joint preface they explained their aim of introducing Shakespeare’s language to children: “his words are used whenever it seemed possible to bring them in; and in whatever has been added to give them the regular form of a connected story, diligent care has been taken to select such words as might least interrupt the effect of the beautiful English tongue in which he wrote: therefore, words introduced into our language since his time have been as far as possible avoided.” 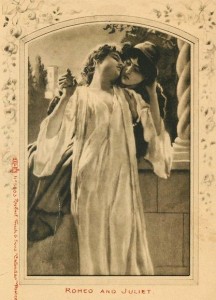 The Tales have been illustrated by many distinguished artists including Arthur Rackham. My own copy of the book probably dates back to the 1880s, and shows many signs of being well-read, with most of the prefatory materials missing and the covers held on by ancient sticky tape. The illustrations are by the artist William Harvey (1796-1866) who contributed work to Knight’s Illustrated edition of Shakespeare first published in 1839.

My favourite illustrations to Lamb’s Tales from Shakespeare are those by Harold Copping (1863-1932) which feature in a 1901 edition. His style was very different from the prim but also melodramatic images by Harvey. I particularly like the Romeo and Juliet illustration in which the artist succeeds in conveying Juliet’s awakening sexuality, unlike Harvey’s image of the same scene where Juliet, hiding her face, drapes her arms chastely around Romeo’s neck. 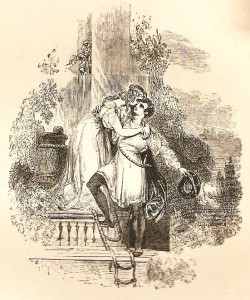 Harvey’s illustration for Romeo and Juliet

Harvey’s image, though, might be thought closer to how Charles Lamb describes this scene:
That night Romeo passed with his dear wife, gaining secret admission to her chamber, from the orchard in which he had heard her confession of love the night before. That had been a night of unmixed joy and rapture; but the pleasures of this night, and the delight which these lovers took in each other’s society, were sadly allayed with the prospect of parting, and the fatal adventures of the past day. The unwelcome daybreak seemed to come too soon, and when Juliet heard the morning song of the lark, she would fain have persuaded herself that it was the nightingale, which sings by night; but it was too truly the lark which sung, and a discordant and unpleasing note it seemed to her; and the streaks of day in the east too certainly pointed out that it was time for these lovers to part.

Many of Copping’s pictures were sold as postcards, and this site contains several of his illustrations to Lamb, as well as some coloured images of Hamlet.

Illustrations interpret the words of the play as much as the written narrative. In a recent post on the British Shakespeare Association’s Education blog, student Anna Henley writes about the paradox that retelling the story in student editions  can limit understanding of the play at the same time as they attempt to explain it:
Classroom experience from Bruce Coville and Alison Prindle among others … has shown that narrative forms… are a fantastic entry point for students despite the narrowing of interpretation that may accompany this approach. For instance, Bruce Coville writes, “it is stories that children long for, and it is story that is the entry point for many people to the pleasures of Shakespeare” .*

The Lambs felt it was right for them to rework plots: Charles Lamb actually included a justification for missing out most of the Gloucester subplot from King Lear. Young readers were presented with certainties and moral precepts. Of the end of the play he wrote “the melancholy fate of the young and virtuous daughter, the lady Cordelia, whose good deeds did seem to deserve a more fortunate conclusion; but it is an awful truth, that innocence and piety are not always successful in this world”.