Shakespeare’s vision of apocalypse: King Lear at the National Theatre 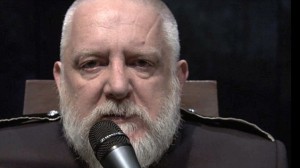 As I write this on the afternoon of 6 June the celebrations for the 70th anniversary of the D-Day landings in Normandy are taking place. President Hollande, speaking into a microphone, has been talking about peace in Europe, in front of an audience of servicemen, veterans and heads of state. Stretched out on the beach in front of him is a vast map of Europe, the same beach onto which Allied troops fought their way exactly 70 years ago. Some of the politicians, behind the polite handshakes, are very much at odds. Earlier the TV coverage split the screen to show the images of President Obama and Vladimir Putin simultaneously reacting to what was happening.

Just two days ago I was at a performance of King Lear at the National Theatre, where Simon Russell Beale as Lear spoke into a microphone about his wish “that future strife may be prevented now”, in front of an audience of servicemen and heads of state. The three maps neatly dividing the kingdom lay in their official black folders.

Two days before that, on Monday, King Juan Carlos of Spain announced he was to abdicate in favour of his son, Crown Prince Felipe. King Juan Carlos has led his country from dictatorship to democracy. But his announcement, designed to allow for a smooth transfer of power, has led to calls for a referendum on the monarchy itself.

Ongoing civil war in Syria, turmoil in the Ukraine, arguments about the European Union: can parallels between political events and Shakespeare’s play ever have been more striking? I’ve seen many productions of King Lear but have never before been so aware of the way that the misjudged decisions of the ruler can lead to the disaster for the whole world of the play.

The disintegration of Lear’s seemingly well-ordered kingdom is spelled out for us in a whole series of scenes in which there is, it seems, no ray of light. Horror is piled on horror, culminating in the blinding of Gloucester. I had heard before I saw the production that Lear bludgeons the Fool to death, and expected it to jar. But it makes sense in this production where the familiar companionship of the Fool has no place. In the same scene the “joint stool” that stands in for Goneril in her mock trial becomes a metal toilet and the bed offered to Lear is a wooden pallet covered in a scruffy blanket.

Around forty extras begin the play as disciplined troops adding to the cold formality of the scene between Lear and his daughters. Later they morph into Lear’s riotous knights, hauling a huge dead stag onto a table in Goneril’s home, I think the only time the natural world is seen onstage. And matching the physical dislocation of many of the main characters they cross the stage, homeless refugees. 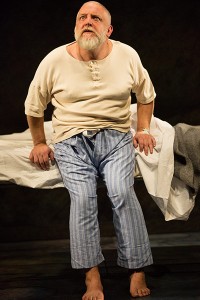 Lear’s physical and mental deterioration matches the disintegration of the state. In the first scene, immaculately dressed as a military dictator, Lear is in control, confident enough to allow himself a little chuckle as he puts his disfunctional daughters on the spot. By the time we get to the scenes on the heath he seems to have physically shrunk, shambling across the stage wearing baggy vest and underpants, later in a hospital gown or pyjama bottoms.

Before going to King Lear we made a quick visit to Tate Modern, just along the river. In the surrealist galleries many paintings illustrate a view of the world affected by the world wars of the twentieth century. Among the extrovert pictures by Picasso and  Dali I was drawn to this picture by David Alfaro Siqueiros, entitled Cosmos and Disaster, painted in 1936. He was Mexican working in the USA, and experimented in this painting by thickening his paint with sand, grit and splinters of wood. It is his response to the outbreak of the Spanish Civil War, thought to be influenced by photographs of the trenches of the First World War. 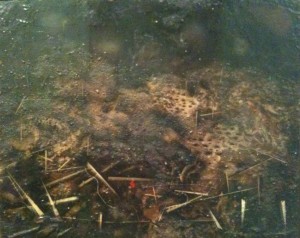 Looking at the scene of desolation and destruction I wondered what King Lear was going to be like. On Siqueiros’s apocalyptic battlefield is nothing but darkness, fractured wood, and wire,  and in the centre of the painting, a small splash of red. Blood, flame, birth, death, suffering? A reminder of the awful cost of war. It made me think of Gloucester’s blood spilled on the stage when he is brutally blinded, all the more shocking because it happens not on the battlefield but in his own home.

There are still a few performances to go before the National Theatre’s production of King Lear closes. It’s a bleak, harsh experience, but if you’ve got the chance, do go. I’ve never before felt that this play is Shakespeare’s greatest achievement – but I did this week.

One Response to Shakespeare’s vision of apocalypse: King Lear at the National Theatre