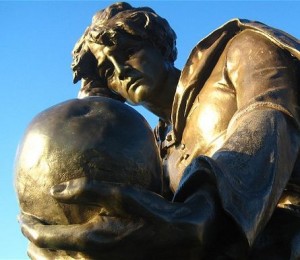 Hamlet from the Gower Memorial

Hamlet has got to be the most frequently quoted or alluded to work of literature ever written. People may not even realise they are quoting from the play when they say “Neither a borrower or a lender be”, “more in sorrow than in anger”, or “frailty, thy name is woman”. The play has supplied countless titles for books of all kinds, and it is quoted or alluded to in many plays, films and TV programmes, as well as interviews and news reports.

At the recent British Shakespeare Association conference Sixta Quassdorf from the University of Basel introduced us to a new project which she is working on in her paper : HyperHamlet – A database of Quotations from and Allusions to Shakespeare’s Most Famous Tragedy. 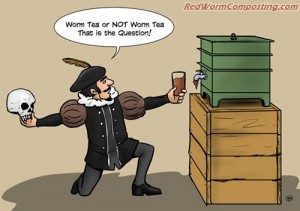 The database contains references to Hamlet from over four centuries, with 10,000 entries written by well over 3000 different writers. A huge variety of sources has been scoured for data including annotated editions, allusion books, and the work of writers like Dickens. It includes modified quotations, verbal and acoustic echoes. You can search by work, by author, by language or by period, or you can just scan the text and see what comes up. A full explanation is given here. 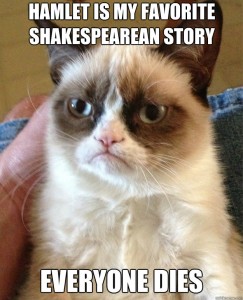 Although Sixta used some images in her presentation, sadly the database doesn’t include pictures. But perhaps that’s just as well: as well as cartoons like the one above advertising the latest thing in worm composting they would have to include ones like this sour-faced cat.

So famous are the lines, the story line and images such as Hamlet with the skull, that it can be used for just about anything. I bought the teapot pictured below on Ebay some years ago. Shakespeare’s head is the lid of the pot, and the scroll is the spout. I was particularly taken by the label on the base that warns the owner not to use it as a teapot, and that the line which appears on it, “Alas, poor Yorick, I knew him well Horatio” is a misquotation. Both useless and wrong, brilliant! 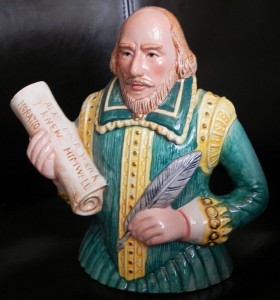 To go back to the database: it is a lot of fun, but there is a more serious aim, which is to gather empirical evidence relating to Shakespeare’s influence over other writers over the centuries. Are some lines more popular at different times, or in different parts of the world? It hopes to provide material for future research, asking what has Shakespeare contributed to the work of other creative writers and to the language itself.

Best of all, the team at Basel are encouraging people to contribute quotations and allusions that they find for themselves. I have no idea of the source of the story, but in a paper I heard about David Garrick’s performance of Hamlet the lecturer explained it was so popular that young men would greet each other exclaiming “Angels and ministers of grace defend us” and do an impression of Garrick’s famous pose that he struck when the Ghost appeared to him on the battlements. Garrick so wanted to make a big impact at this moment that he used a mechanical device concealed in his wig to make it appear that his hair was standing on end. I have no evidence for either of these extraordinary bits of stage history except that I’ve heard respectable academics state them (so they must be true). I can’t help feeling that they should be represented somewhere on the HyperHamlet database though!

I’ve found it fascinating to read some of the quotations on the site – many by authors I’ve not even heard of. Do take a look at the website and if you know of a reference they’ve missed, the instructions for how to contribute are given on the site.

This entry was posted in Legacy, Plays and Poems and tagged Hamlet, HyperHamlet, Sixta Quassdorf, University of Basel. Bookmark the permalink.