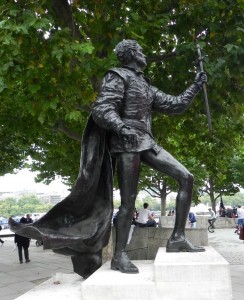 The statue of Laurence Olivier outside the National Theatre, London

Friday 11 July 2014 is the 25th anniversary of Laurence Olivier’s death in 1989. By chance I was in the RST that evening and before the performance artistic director Terry Hands delivered an onstage tribute to Olivier. At the end of his speech, Hands suggested that rather than stand for the usual minute’s silence, the entire audience should give Sir Laurence a standing ovation. It was an appropriate response to the extraordinary achievements of Olivier as an actor and director.

At the Victoria and Albert Museum on 11 July, at 18.30, there will be a talk by biographer Philip Ziegler, who will speak about some of the highlights of Olivier’s career while actors Maureen Lipman and Ronald Pickup, will recall their experiences of working with him. 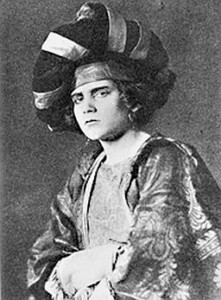 Laurence Olivier as Kate in The Taming of the Shrew, 1922

It’s hard to believe it’s been a whole quarter of a century. Other actors of his generation have dropped out of popular consciousness, but Olivier’s name is still famous. His first performance in Stratford was as a 14-year old schoolboy in 1922 when he appeared at Kate in The Taming of the Shrew in a production featuring the boys of All Saints School in London. It received much attention and the praise of Ellen Terry and Sybil Thorndike, who described him as “the best Shrew I ever saw – a bad-tempered little bitch”.

His professional acting career began early, with a couple of seasons at that great cradle of talent, the Birmingham Rep. London soon beckoned, and although the energy and charisma of his performances were praised he was often unfavourably compared with John Gielgud and Ralph Richardson, both great stage actors. His career took him to Hollywood as well as London and he became the most famous and glamorous of English actors.

After the war he continued to cement his reputation, but was aware that theatre needed to move in new directions. In 1956 Osborne’s play Look Back in Anger shook the theatre world, but even before that Olivier had been involved in a minor revolution in the unlikely setting of the Shakespeare Memorial Theatre. In 1955 he joined forces to perform Titus Andronicus, directed by the young and revolutionary  Peter Brook. It was the only play in the accepted Shakespeare canon that had not been produced in Stratford, and when it had been performed at the Old Vic in London the horrors had provoked laughter. Brook sought to ensure this would not happen. Unsettling sounds were played, and in this bloodiest of plays there was no stage blood. Olivier’s own performance, though, was mesmerising. In his review Kenneth Tynan described his performance:

“Titus enters, not as a beaming hero, but as a battered veteran, stubborn and shambling…A hundred campaigns have tanned his heart to leather, and from the cracking of that heart there issues a terrible music; not untinged by madness. One hears great cries, which, like all this actor’s best effects, seem to have been dredged up from an ocean-bed of fatigue. One recognised, though one had never heard it before, the noise made in its last extremity by the cornered human soul”. 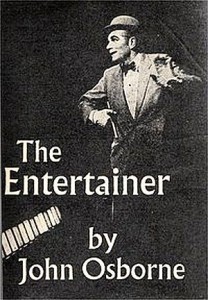 The programme for The Entertainer

Olivier realised he could be left behind by the fundamental changes that were sweeping London theatre. Following this success this most heroic of actors chose to play Archie Rice, a failing music hall performer, in John Osborne’s play The Entertainer.

Two years later though he seemed to take a step back by appearing in Stratford in Coriolanus, in a season that deliberately celebrated the past with a host of famous older actors: himself, Edith Evans, Harry Andrews, Paul Robeson, Charles Laughton. But Peter Hall’s appointment as the new artistic director of the Memorial Theatre had been announced at the end of 1958, so the 1959 season was inevitably viewed as the swan song of the Tony Quayle and Glen Byam Shaw years. Hall had already gained a reputation for working with daring writers like Samuel Beckett, and was producing fresh and successful Shakespeares. He directed the Coriolanus, described by Sally Beauman: “His Coriolanus is remembered by all who saw it for Olivier’s electric, arrogant performance in the title-role, with its extraordinarily daring death-fall at the end.”

In 1962 Olivier became the first Director of the National Theatre, and when the current theatre was build in the 1970s the largest auditorium in the building carried his name.  The Society of London Theatre gave him their Special Award in 1979, and in 1984 he agreed to their awards being renamed the Olivier Awards.  He had been knighted in 1947 and received a Life Peerage in 1970, the first actor to do so. On his death in 1989 he was interred in Poet’s Corner in Westminster Abbey, a rare honour for an actor. There’s a full biography here. 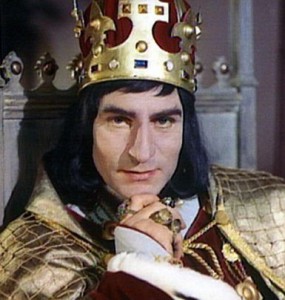 Olivier made several notable films of Shakespeare, the most famous being his 1944 Henry V. He made film history by being the first performer to win the Academy Award for best actor for a film he also directed, Hamlet. But if you want to see one film to remind you of the sheer brilliance of his acting take a look at his Richard III, released in 1955. Daniel Rosenthal describes how “stressing the darkness in Richard’s soul, Olivier is repeatedly shown as a humped shadow, limping across the floor”, and “Even when outlining his machinations to camera in conspiratorial soliloquy, Olivier can retreat into the background knowing that his extraordinary voice will still command the screen”. His delivery of the opening speech was famously parodied by Peter Sellers to the words of the Beatles’ song A Hard Day’s Night. Olivier was nominated for Best Actor Award by the Academy for it and although it now seems wildly over-acted, there’s still much to admire in his flamboyant performance.